What's the reason for this exceedingly blue reflection from buildings in this image?

I've noticed that lately my camera has some issues with blue neon lights. Here's an example shot. 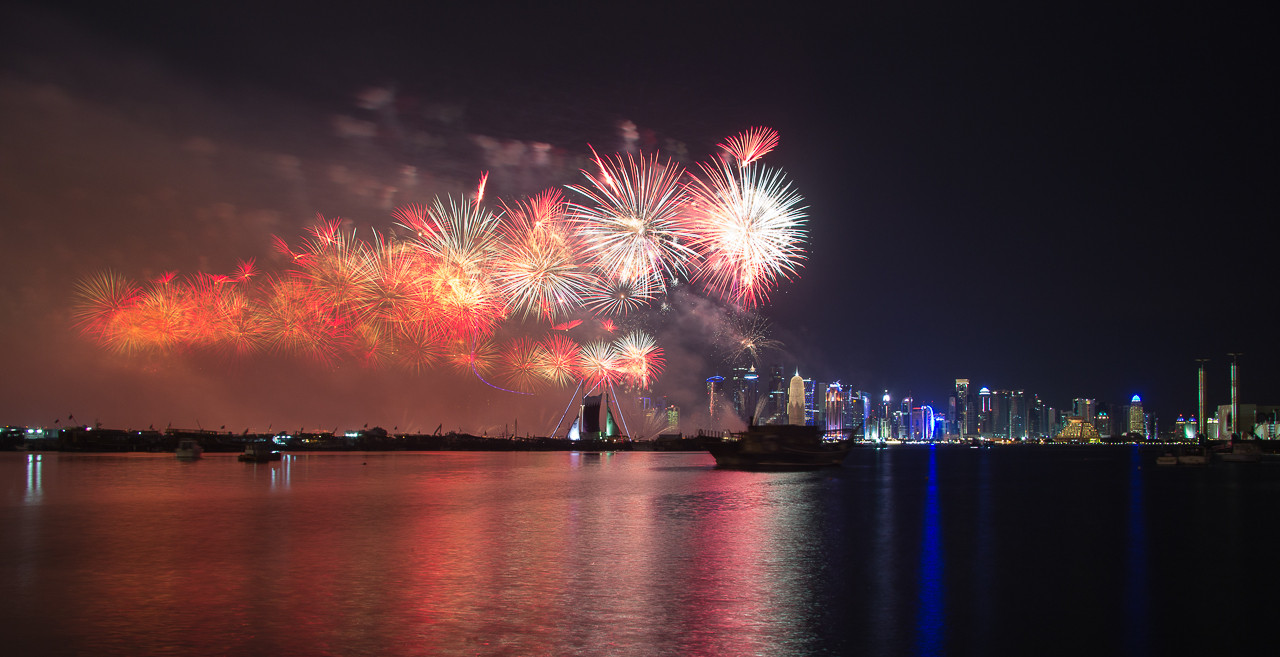 You can notice the effect in the reflection of the water in a building and in the blue dome of another one (both buildings are in the right third of the image). The issue seems to be caused with different lenses at different aperture and iso settings as well.

EDIT: Here's another image where the blues are blown

In addition to what Michael Nielsen posted, keep in mind that the blue is probably a whole lot brighter than you think it is.

Most things in the natural world get their apparent colour by selectively reflecting a part of the visible light spectrum, and that almost always includes "contamination" (for want of a better word) by colours other than the predominant one. Green vegetation always has a red component; red flowers usually have some amount of green in them as well.

The lights you are asking about are created by direct emission of a very specific wavelength of light. There is no contamination. No matter how bright that blue light gets, it will always be blue, and since it is "only blue", it will appear less bright than lights that are less intense at the blue wavelength, but has intensity contributions at other points on the spectrum as well. A "white" light that appears to be as bright as the blue will have one-third (or thereabouts) of its intensity in colours you could call "blue", another third in green and yet another third in red.

It's the fact that you have a single colour channel driven into clipping that's the fundamental problem. It records as a maximum value for that channel, but you have no way of knowing what the actual value is (other than to say it's too much). If the light has been designed to register as bright as a white light would have, it needs to be an awful lot brighter in that channel than the white light would have been. And since your eyes don't clip digitally (or knit together the changing patterns of reflections on the water over time), you won't see with the naked eye the same thing the camera sees.

It is not just the blues, but also the fireworks given a salmon colour in the water. The same you see in sunset pictures.

It is because of infinite amounts out surface normals in the water. If the water surface was completely uniform, you would see a perfect mirror image in it. But the waters stirs, so you get infinite surface normals (facings) which creates infinite tiny little mirrors from your gaze (camera) to the lights.

Your most significant blue light comes from a large very bright vertical illuminating structure, which means the surface normal mirrors will have higher probability to hit a point that shoots out a blue ray (think of it as ray tracing). On top of that it is a very dark area of the image so it will seem more apparent.

The second most significant blue line is from the dome which also has some volume, but more incidental, but it is still on the top of the dynamic range of that side of the image and dark waters. Remember that the darkest to brightest is not linear, and the highs are clipped, so it is actually proportionally brighter than it seems.

Then you have the fireworks that also have reflection intensities proportional to how tall and bright the explosion is above that water line.

And you have bright whites (that are clipped, on top of the dynamic range in the image and thus very apparent in the water) but the lines are broken by some obstruction in the water that changes the angles - possible ice or the aftermath of a boat.

You can control the camera rendition of these colours in saturation levels, and in how you deal with highlights and compress the dynamic range from the 14bit raw signal. 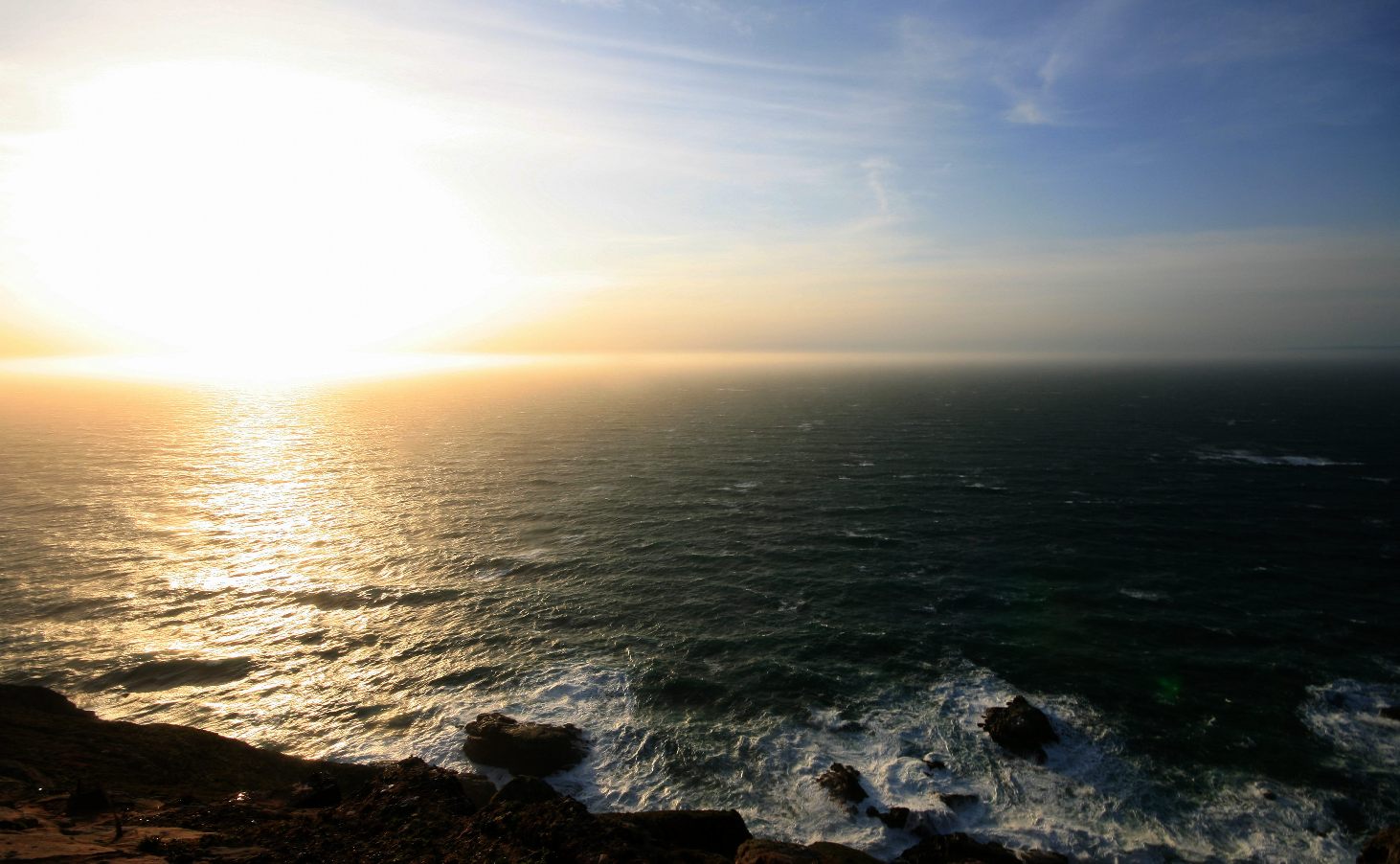 Here you see the image with another dynamic range transfer function - it is not as good as it would be if I had worked on the 14bit raw data, but it shows the principle nonetheless. The main issue is that the colours are clipped, so they dont retain the same R/G/B chromaticity information.

You might have to shoot HDR images to get the result you want. 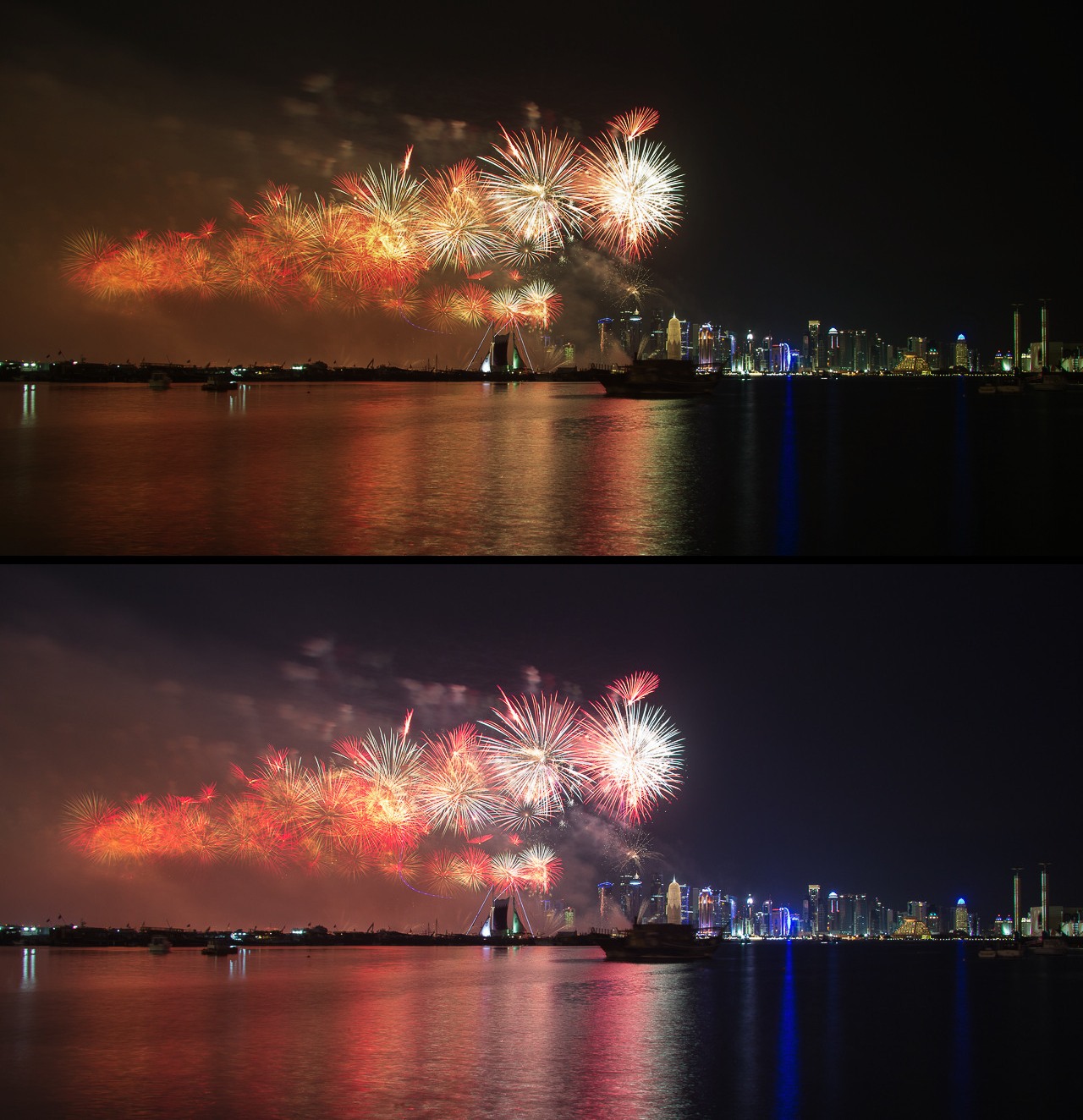 If you shoot directly to jpeg, make sure it doesn't boost contrast and saturation, and find the best custom white balance.

Not the answer you're looking for? Browse other questions tagged troubleshooting artifacts color-blue or ask your own question.

12
Where does this reflection come from in a long exposure shot?
5
What are the cross patterns in this image?
8
How can I fix the color of blue photos using settings from “good” photos?
9
What caused dark areas around bright light in this cityscape shot?
0
What's causing the weird light pink color splotch in this photo?
2
Are these strange splotches on buildings in a long-exposure photo hot pixels?
5
What is the blue circle in this moon image?
12
Why does this satellite image of an airplane in motion show red, green, and blue bands with strange artifacts?
1
How did the designer achieve this Blue tint effect?
28
What could be the reason for these block-like artefacts in the blue sky?