Are these strange splotches on buildings in a long-exposure photo hot pixels?

This is the first time I've seen this in my pictures and can't quite figure out what it is / how it fix it / or how to avoid it in the future. Was wondering if anyone here had any ideas?

The thing in question are those speckled bits on the buildings and a few red ones in the sky on the left. 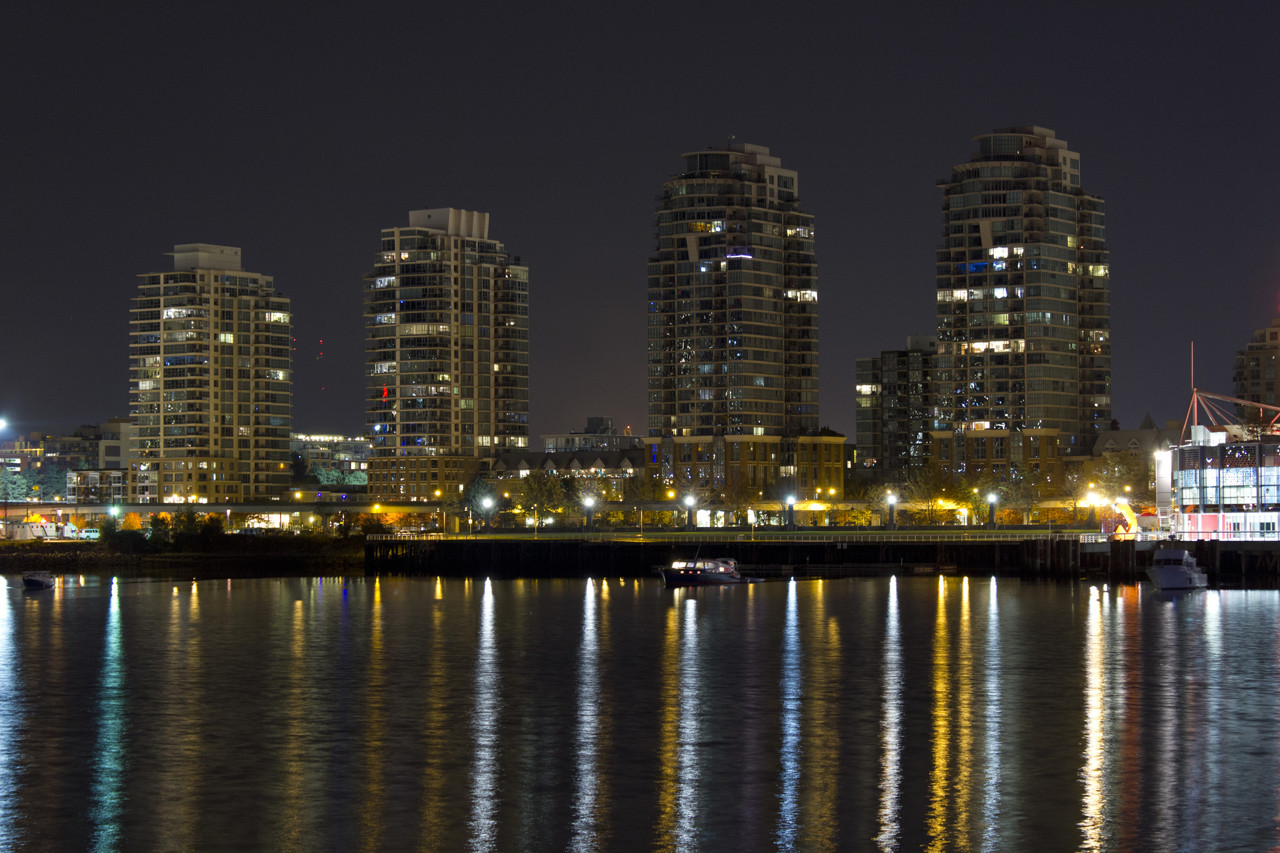 After a bit of research, I thought maybe they are hot pixels (never encounter them before either, just looked up about them recently), but in my other shots, those pixels in those locations are fine nor do they shot up in other similar shots (or at least I don't notice them). They seem to be fixed to that location on the building regardless of position/zoom.

Another example of them, though this one has less (cropped from a larger picture, but it was from the middle of the shot extending to the right of the frame).

Between the two shots, these buildings were roughly 90 degrees relative to me on opposite shores, so I doubt it is some crazy reflection from somewhere.

I'm using a canon 550d (T2i) and the first picture taken 5" shutter, iso400, and F5.6. The second picture is similar: 6", iso400, F4. Both using kit lens (18-55mm) on a tripod with no filter on. Both those pictures were also from a set of bracketed shots and the spekcles show up in all of them in the same places at slightly different brightnesses. Exposures went from 1.3" to 20" and 1.6" to 25" with everything else was fixed. Was also shooting in raw.

If it mattered, an hour or two before, I was shooting in near pitch black (no bright light sources) with up to 150" exposures. No issues in those shots though.

Based on the position of the red dots in between the building, they appear to be radio towers. That is a typical configuration for the aircraft warning lights on two parallel antennas and I think the antenna itself may also be visible, but it's hard to tell at that detail level. My guess is that the red blotch is also something accurate to what was there, but it's hard to tell at the small sizes you posted.

The last paragraph is very important - would they be hot pixels, you will see them in the black image as well.

If you rule out reflections, laser toys, UFOs and other sources outside of camera, it must be inside ;)

See the article http://www.astrophys-assist.com/educate/noise/noise.htm covering the physical sources of noise on CCD and how to treat them. They usually appear in regions of high contrast, where the charge leaks to neighboring cells, which is not your case.

On the upper image, the red dost are quite regular, aren't there some radio masts or safety red lights on the buildings?

After more careful look on your second image, there is some blue/violet laser projection on the right building. Can the red be something similar?

The reflections are much dimmer, so the colors are not the same. All three channels are pretty much blown out in the highlights but the reflections are stronger in the red channel than blue and green. The original lights are probably equally red, but when a light source is twice the brightness needed to produce full saturation in the red channel and just over fully saturated in the blue and green channels it will appear mostly white, since the values for R, G, and B will all be 255. The color of the reflections are also probably influenced by the anti-reflective coatings on the lens.

For the rest of the images, the reflections on the windows appear to be reflections of other bright lights in the skyline that are outside the angle of view of the lens/camera when you took the shot.

Ah ha! I have figured them out. Mostly because I decided to go back and revisit where I shot specifically looking for causes for the mentioned things and walking all over to see from different angles. =b

The floating red lights are indeed towers of some sort. I concluded this mostly because I saw them with my own eyes and they were slowly flashing in a pattern. =b Not sure how they are supported, but they must be extremely thin to not show up at max exposure?

I don't have a definite conclusion for the strange splotches, but I do have a good guess: they are indeed reflections, but from a dome shaped building somewhat far away (like a few km). Walking up very close to the four buildings I still couldn't see any crazy reflection, however those four buildings are in almost direct view of this blue lit domed building. The buildings in the second picture have an obscured view, but some blue light does get cast on them from the same source when I walked right up to them, perhaps giving off the blue splotches. Further out, the buildings behind these buildings don't seem to have these splotches. The domed building happens to only be a few stories high, which would explain why the splotches are only at the lower floors of the taller buildings as well.

As for the strange shape and pattern, I'm going to guess they are due to imperfections in the glass in each of the windows. Some aged warping of the glass maybe?

Thanks for everyone's help and ideas (certainly have better eyes then I do; wish I could set them all as part of the answer).

Not the answer you're looking for? Browse other questions tagged long-exposure artifacts hot-pixels or ask your own question.

15
is it normal to get significant lens flare with a 50mm f/1.8 prime lens?
2
What could cause pink spots on my RAW photos?

12
Are hot pixels just one pixel?
14
Does long exposure cause hot pixels in photos?
3
Are these weirdly-shaped purple stains really from particles under the first layer of the sensor, and if so, what can I do about it?
3
Is high Chromatic Abberation typical with the Pentax f/1.8 50mm lens?
8
What's the best way to deal with hot/stuck pixels in long exposure night photographs?
2
Black smudges during long exposure shots? What are these called and why are they there?
3
What are these curved, dark bands at the top of my photo?