Why does this satellite image of an airplane in motion show red, green, and blue bands with strange artifacts?

I stumbled upon this satellite image (http://goo.gl/Wv503u) capturing a plane in flight over a city. I'm having a little trouble explaining the color effects caused by the aircraft motion.

What I imagine is that the image is constructed by blending blue, green, and red filtered photos taken at slightly different times. This seems sufficient to create a full color image and would explain some chromatic artifacts caused by objects in motion.

However, I notice there are 2 bands of red, green and blue on the wings which to me suggests a blend of more than 3 photos. Also, the colors don't seem to blend the same way on the tail. I see red, yellow, magenta, cyan and blue which suggests either different speeds between wings and tail (which I find impossible) or some sort of shutter effect. Also, I see some contours in the nose of the plane and the leading edge of the wings. Are these caused by imperfect filtering of infrared? or is there some Luma component added to the mix?

What's going on? What can be learned about the camera?

Edit: I added a screenshot of what my browser shows when I click that link 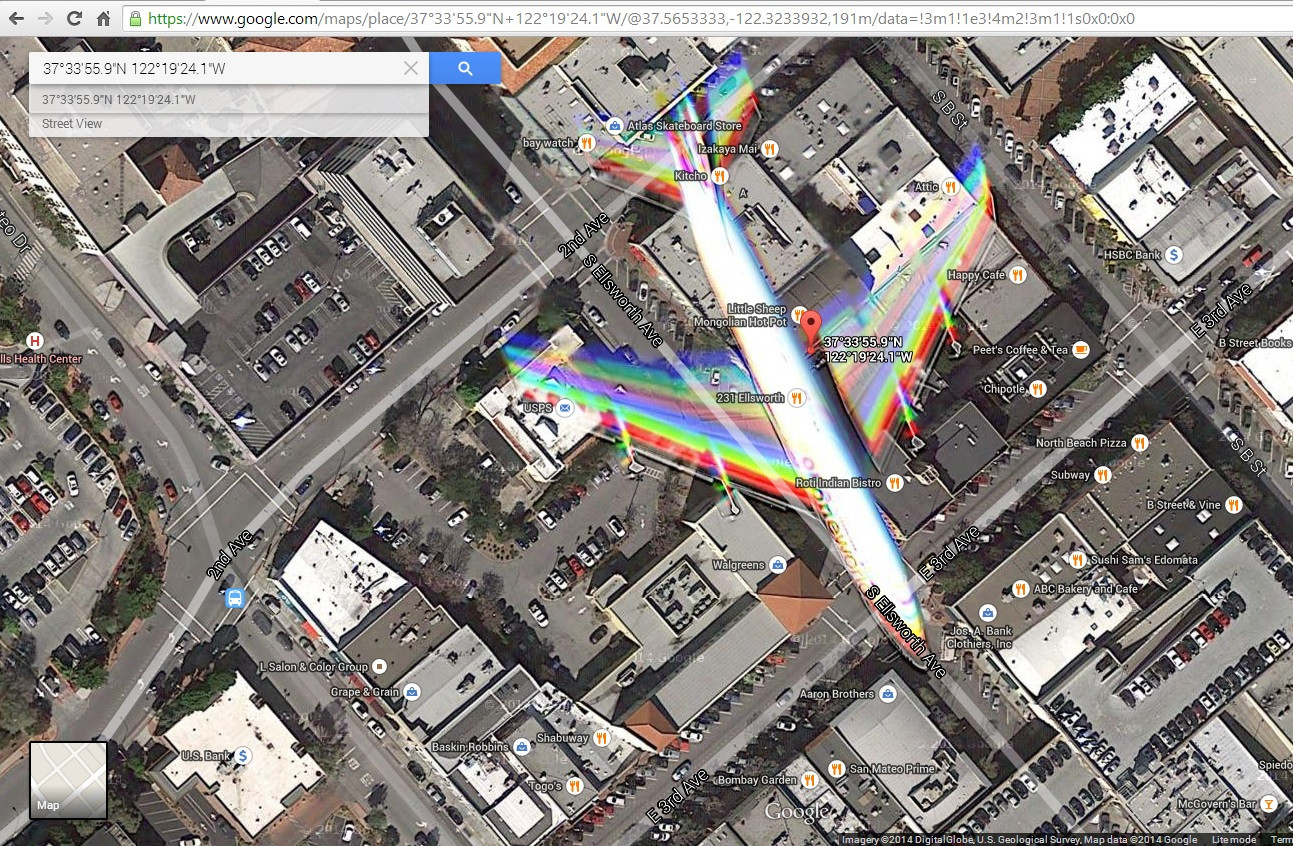 AJ is correct here. What you are seeing is the result of motion blur as both the satellite and the aircraft are in motion relative to the ground (the desired target of the photo). Those pretty pictures you see in Google Earth and elsewhere are the result of red, green, and blue filtered images combined into what is called a "Multispectral" image (MSI), named because it combines images taken over different bands of the electromagnetic spectrum together into a single image. Usually, the color filtered bands are lower resolution (think 1-2 meters GSD, ground sample distance, which is the distance between two adjacent pixel centers), and ground coordinates are provided by a sub-meter resolution greyscale (0 being complete darkness to 255 being totally white) or "panchromatic" image (PAN). The PAN provides the coordinates and relative intensity info (contrast). Add in elevation handling (usual a Digital Elevation Model or DEM from USGS if you're in the US), orthorectification (adjusting the image to look flat even though Earth isn't), projection (Earth is round, trying to put a section of it into a square instead of a curve introduces errors), and interpolation (due to differences in resolution between the PAN and the MSI to make the final image), and you've got your final product. To really blow your mind, we also have to account for nadir and sensor angle (satellite isn't pointed straight down, camera is at an angle as is the Sun relative to the Earth).

My best guess is that it may have to do with how the satellite operates. It may capture red green and blue images separately and then combine them. If this is the case, then two things would happen. First, the plane would move between shots for each color.

Second, the satellite would move quite a bit as well. While the motion of the satellite could be corrected for, the amount of correction would depend on the distance from the satellite of the object being imaged. Since the plane may be as much as 7 miles closer to the satellite than the ground, this correction could be thrown off pretty significantly.

Looking at the imagery, it was not provided exclusively by a satellite. I work for the company that built the sensors and cameras for Digital Globe WV3 and WV4 sensors and did sensor, motion compensation and other design work as well as image quality analysis for those sensors. The spatial resolution of the image you posted is beyond the resolution commercially available for those platforms commercially at that time. (Managed by license and treaty.)

I believe that the artifacts you see are a result artifacts from an airborne sensor. Normally airborne sensors are motion compensated for the transitioning of the image across the sensor area, and take into account the relative ground speed of the sensor, and the direction and altitude it is above the ground. In this instance you have a subject aircraft, which is not travelling in the direction the ground is relative to the sensor. Therefore the motion compensation does not work so well. Also there are several geometries for sensor arrays, and they employ different masks and/or scanning strategies.

Generally high resolution large area coverage sensors are push-broom type arrays, similar to some scanners and photo/document copiers. When the object imaged is not traveling in the same manner as the ground target, it is subject to sampling errors, and artifacting like you observed.

Looking at that location on Google Earth, the imagery has been updated, so I could not take the image data and back out the artifacts to tell you the relative motions of objects. However given what you presented, and my knowledge of commercially available satellites and satellite imagery, I doubt that the images are space-based.

I have worked in this field as an image scientist for several decades, and am giving you my impression, but have not analysed the data to perform a more rigorous analysis, which would involve making assumptions about ephemeris data and sensor designs. I did take into consideration the time you posted, and applied by knowledge of available sensors, particularly in the commercial space environment.

I think it is more the effect of a 'focal plane' shutter, a common effect encountered on SLR cameras whilst photographing moving targets. If the subject motion is parallel to the direction to the shutter travel and the object has considerable speed, you het a 'stretching' of the image - something quite visible in the wing and tailplane leading edges.

Not the answer you're looking for? Browse other questions tagged artifacts motion-blur chromatic-aberration color-filters or ask your own question.

8
What are the uses of yellow, green, red, blue filters in black and white photography?
12
Different colors of light are disrupting my focus. What lens feature minimizes this?
3
Is this chromatic aberration?
2
What is the cause of this red-green artifact and how can I prevent it?
7
Red-channel rolling shutter in google maps?
2
Why does this ugly line pattern appear when I upload my full-sized image to a website or view on mobile?
2
Why are there weird red spots and blobs on images taken with Yashica Super FX-3?
6
Why am I sometimes having "doubled image" and soft photos with my Tamron 100-400mm
12
multi-strobe-like motion blur outdoors?