What could cause this white speck in a blue sky?

I took a photo during blue hour, and notice that there are some strange white speck on the blue sky. What is this and why it happens? Initially I thought it was dust, but usually dust will leave black speck on the photo. This shot is taken at ISO-100 to minimize noise. 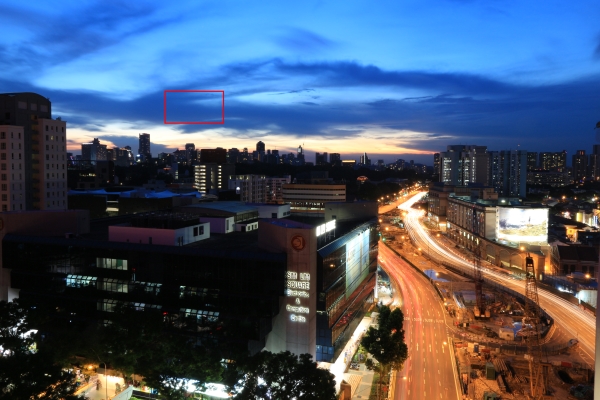 The image at 100% crop at the red rectangle 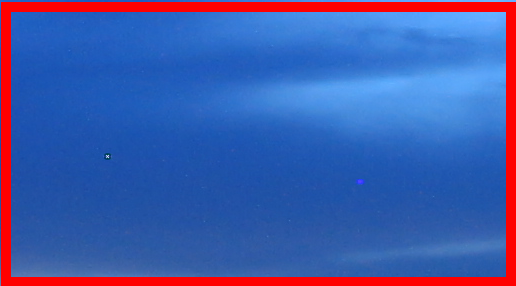 As you can see, there is a white speck at the left, and also a lighter blue speck on the right.

This looks like a stuck/hot pixel in the sensor.

Due to the demosaicing algorithm, it has affected not just one pixel in the output image but also four diagonally adjacent pixels. I would be willing to bet there is a single red or green pixel on the sensor right there that is incorrectly reading too bright. The other faint dot to the right may be a blue pixel that is only a little bit hot, and being a blue pixel it's affecting more surrounding pixels after demosaicing.

Hot pixels are more likely to appear during long exposures or when the camera is warmer, though they could appear at any time. If you took other photos under similar lighting conditions, check if the same thing appears at exactly the same position in the image. If so, it's probably your camera sensor.

Hot pixels aren't that uncommon but cameras often detect them and correct them so you wouldn't see them. During very long exposures (more than, say, 10 seconds) they can become a more significant problem so if you do a lot of these long exposures you'll likely become familiar with them.

It will be easy enough to photoshop them out if you need to. If you use RAW processing software then it usually has features for dealing with hot pixels too. If you don't use RAW, your camera may have an equivalent feature for fixing hot pixels that needs to be set up in the camera menu. The best of these features will keep a record of the positions of the hot pixels on the sensor then filter bright pixels only at those positions, to reduce the chances of accidentally blurring out any "legitimate" bright points of light in the image. Detecting hot pixels involves taking a "dark frame" - a very long exposure of total blackness e.g. the inside of the lens cap (or if the camera does it, with the shutter closed).

Not the answer you're looking for? Browse other questions tagged artifacts sky or ask your own question.

2
What is this bright squarish pattern that I'm getting in long exposure images?
2
Why are there shiny bits in my night photo?

9
Why is my camera showing a lot of stuck red and white pixels?
6
Why does blue sky gets rendered as black in black and white film photos?
4
Is it better to take Black and White photos during daylight hours or evening?
1
Do sensors absorb different spectrum of light at different rate, making longer exposures better for blue skies?
12
Why does this satellite image of an airplane in motion show red, green, and blue bands with strange artifacts?
5
Why am I am seeing rings (banding) instead of smooth graduation in my sunrise pictures?
28
What could be the reason for these block-like artefacts in the blue sky?
2
What causes this leather-grain pattern of noise in the sky when I inspect with a sharp mask?
5
What caused these large white spots on my developed negatives?
1
What are these “lights” in the sky in my drone picture?