Why does blue sky gets rendered as black in black and white film photos?

I recently started using a film camera along with my digital camera. I took a picture with both the cameras. This one is from digital camera:

Left is the photo without editing and right after selecting "Black & White Treatment" in Lightroom. See the way sky is rendered white. This is what I was expecting from film camera without any filter. But I was pleasantly surprised to get this: 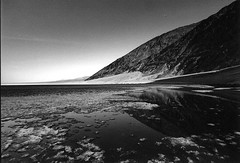 This is a scanned copy of the print I got from film. The blue sky is rendered black. I shot this on Ilford Pan F Plus at ISO 50 with sun towards the right of the frame.

Now my question is, what is it that rendered the blue sky black? Is the characteristic of this particular film or some contrast in the scene or the guy who developed this for me played some nice trick.

Your printer appears to have done quite a bit of burning in of the sky area (and of the closer of the two rock faces, as well as some general vignetting). It's a pretty good job, but you can see some lightness close to the hill that wouldn't be there if the darkness was the film's response to the sky.

Panchromatic black-and-white film is generally more sensitive to blue than to other colours (although by how much varies with the emulsion, some being more sensitive to greens and others to reds than others). In order to get a substantial sky, you normally need to use some sort of colour filtration, normally in the light yellow to deep red range. Without filtration, a blue sky will normally be very light in tone, without much distinction between the sky and clouds.

When shooting black and white, you should consider a K2 yellow filter and a #25 "light red" (it won't look very light to you when you see it) to be standard parts of your kit. The K2 will render the sky more or less "normally"—that is, there will be a distinct tonality to the sky, lighter at the horizon and getting darker as you move up, with visible clouds. The #25 will give you a much darker sky and more dramatically contrasting clouds (assuming white clouds, of course). There are filters covering the range between the K2 and the #25, but they're sort of "neither here nor there"—they're not strong enough to really be dramatic, but are obviously filtered. To get the Ansel Adams-style black skies, you might want to use a #29 dark red filter.

You can approximate the look of filters when converting your colour digital images to black and white, but with a great deal more control over contrast than you can get with an ordinary optical filters.

There are several method to convert a color digital image to black and white. Each one gives different results. A prior none of them can give the same result of a specific film type (brightness and contrast is highly dependant on the type of film and the developping process as you probably know).

Lightroom has a color mixer functionality, which is somewhat similar to the use of a color filter for B&W. You just can choose to make for example things that are blue look darker, or things that are red look brighter.

The usual approach is to put the K2 or #25 on your film camera.

Might be fun to try one on the digital camera. But these days, most folks use their post-processing software (aperture, lightroom, gimp, etc.) rather than filters.

Not the answer you're looking for? Browse other questions tagged film black-and-white digital-vs-film sky color-blue or ask your own question.

5
Emulating Film Black and White in Digital: From Pictures to Print
4
What could cause this white speck in a blue sky?
4
Best practices for scanning chromogenic black-and-white film?
3
Why is analog black&white film slightly violet?
28
Why are these film photos brighter than digital photos taken at the same time with the same settings?
16
What colour scheme for model aircraft should I use to give a realistic black and white film photo?
1
Film Camera White Balance in Studio
3
Does black and white film have any advantage over black and white effects in digital?
4
35mm Black and White Film Artifacts
2
Why does light-colored skin look different in black and white versus digitally desaturated versions of color originals