When to turn on flash for my film camera?

I am a beginner and I just bought an Olympus Stylus Epic and is using it mainly to take pictures of my friends (and occasionally some landscape photos). However, I am wondering if I always have to turn on the flash while taking indoor pictures or will the picture still show without flash.

I am also wondering what types of film I should get. I am currently using the Fuji 200 and Agfa 400.

You could just rely on the automated exposure/metering system of the camera, and put the flash on Automatic mode, so that it will turn on the flash when it thinks it's needed, and you don't have to worry about it.

Given that your camera is a film point-and-shoot with a fixed 35/2.8 lens, and is fully automatic without giving you any explicit control over ISO, aperture, or shutter speed, it may not be worth your while to, say, put a metering app on a smartphone and see how much light you have to determine whether or not to turn on the flash. :)

As for which type of film to get, the ISO rating is mostly what you have to worry about, and it's a tradeoff between low-light sensitivity vs. grain in the final shots. The higher the ISO, the more sensitive the film is to light, but the larger the film grains are.

Here the question is, can you, the photographer use your skills and make camera adjustments that result is better pictures than the automatic setting? Often, indoor scenes will be illuminated sufficiently and the use of a flash is not required. If true, why use a flash? Often our subject will image but the results are less than flattering. This will be due to the direction of the light and how shadows play. It is often better if we allow the camera to flash. This way, the exposing light comes straight on and thus the entire face is well-lit.

Light originating from a built-in flash is not without glitches. The flash, being close to the lens has a tendency to produce “red eye”. Also, this flash location tends to create strong shadows that blemish faces. Also, the built-in flash is only works for short distances and thus is useless when the subject distance is more than several yards (meters) away.

The best advice is, practice and then practice some more and read your camera manual.

It will probably depend somewhat on what you're taking pictures of. The Stylus Epic was my very favorite film camera of my misspent youth, and I tended to keep it loaded with Fuji Superia 1600 (or was it 800?) for night shooting. It's a little grainy, but I always liked the way it rendered artificial light colors, and the high ISO rating, combined with the long maximum exposure time (4 seconds, IIRC) means that if you can keep the camera and subjects from moving, you can do a lot without flash. I used to carry a little 4-inch mini-tripod in my pocket, for shots like this one: 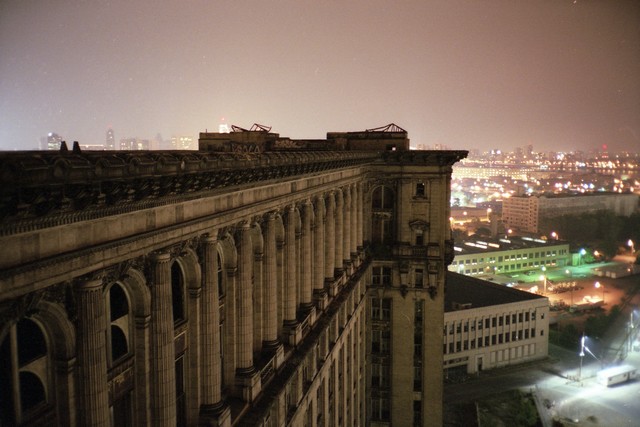 Using a film formulation like that in daylight may result in overexposure in sunlight and a strong blue cast in shadows, though. Actually, I'm not even sure it's still available, but something similar probably is, at least.

Not the answer you're looking for? Browse other questions tagged flash exposure film indoor or ask your own question.

1
Will a short focal length cut it for indoor event photography? (Context: It's Crowded, Dark, Has Mixed Lighting, and Requires Walking Around.)
1
How might the flash mode affect the exposure program on a point and shoot film camera? (Agfa Optima Sensor Flash)
3
Can anyone offer me some shooting advice for a wedding ceremony?
2
1/250 flash sync useful with a 180 mm lens?
12
Is there a specific color temperature to film?
3
Is there any distinct difference between using a 35mm camera versus a 35mm instant camera?
3
How to shoot nice shots in indoor nightclub?
3
How long can a 35mm film be used/stored before it starts to lose its quality after expiry?
3
Film photography with flash - distorted exposures