Right now I'm using a Canon 5D mark II camera with 180mm macro lens, and I am hand-holding the camera. My flash is the MT-24 twin flash. Some of my photos aren't razor sharp and I'm thinking about the old rule that if you're using a 180 mm lens (for example) then you should have at the very least a 1/180 second flash sync speed.

Okay, so admittedly I meet the test since my flash sync is 1/200. But I'm wondering if I would have more razor-sharp pictures if I moved to a DSLR camera that had a 1/250 flash sync speed. As I get older my hands are less stable and I am thinking maybe I get a little camera shake at 1/200 flash sync.

Unfortunately the 1D is expensive and the 7D has a smaller sensor size than I'm using now. Advice?

I suppose another way to go would be to start using the 100 mm macro lens instead of the 180 mm. Taking a 1:1 (life-size) photo with the two lenses, camera shake would be less on the 100 mm, right? Thanks in advance for your help!

If you are using the flash as the main source of light, it won't matter, since the flash pulse is usually much, much faster than the sync speed. Details below, but if you're primarily lighting with flash and are at less than full power, the shutter speed is irrelevant and your exposure will be something like ¹⁄₁₀,₀₀₀th of a second.

If, instead, you are using the flash to balance with ambient light, though, you may benefit from a faster shutter speed. You'll be able to tell if this is the case because you'll have a relatively sharp exposure due to the flash, and then a more blurry exposure overlapping with that in the same image, from the hand-held ambient. At ¹⁄₂₀₀th, it might be a little hard to tell, but you should be able to see it if you look closely.

You're right to wonder about whether you should exceed the rule of thumb: see Where does the ¹/shutter speed = focal length rule for hand shake come from? for details, but in short, it's just a guideline and you certainly can get better sharpness with a faster shutter speed in many circumstances. Or, even better, use a tripod and a wireless trigger, and then camera movement won't be an issue. (If you are doing macro, this should help get focus and framing right too, of course!)

Note that at full power, the duration of most "speedlight"-style flashes approaches the sync speed (or may even exceed it slightly for the full pulse length). But at reduced power, it gets to be really fast. But at macro distances, you're probably not using full power, so it's likely that you'll be getting speeds measured in milliseconds — or even microseconds! See flash duration info on my site about Pentax-compatible flashes — the numbers are from Metz mecablitz models but the concepts are universal.

When you're shooting very close to your subject you're bound to have very shallow depth of field. It's difficult to maintain an exact distance to the subject while holding the camera, but failing to do so can cause your subject to go out of focus. I'm sure you've noticed that you can shift focus within the frame by moving the camera ever so slightly toward or away from the subject, and doing that unintentionally is impossible to avoid completely while hand-holding, which means that you'll miss some shots.

Some things you can do to improve the situation:

Here's a shot I took a few months ago that illustrates just how narrow your depth of field can be. The spider was only 10 or 12mm long, and you can see that at f/5.6 most of it's body is out of focus. 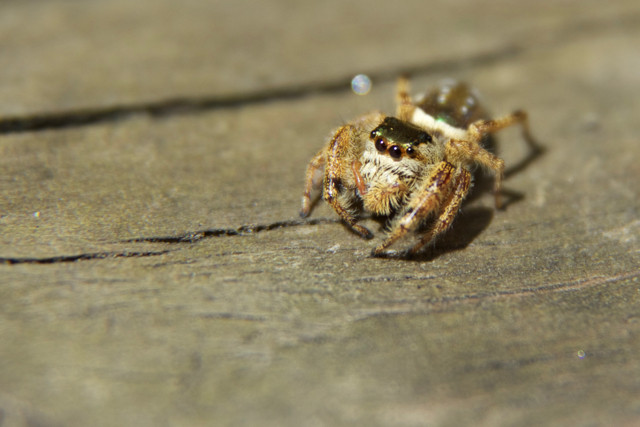 Not the answer you're looking for? Browse other questions tagged flash macro sync-speed or ask your own question.

16
Where does the ¹/shutter speed = focal length rule for hand shake come from?

13
How can I get a black background in daylight using flash sync speed with no extra gear?
1
What light/non-bulky Nikon flash cord will let me control my flash from a camera without a sync cord socket?
8
Why do I get horizontal grey bar with flash at shutter speeds slower than max sync speed?
2
Is trailing curtain sync with manual power settings possible with Metz flashes on Pentax?
3
Can wireless flash triggers decrease the camera's actual sync speed?
3
Disadvantages of always setting flash sync to 1/320s (Auto FP)?
6
Reducing ambient color while preserving sharpness with a flash in concert photos
1
Nikon D610 flash sync: limited to 1/200 or 1/250 possible?
5
Canon native flash off-camera second-curtain-sync: any news?
2
Why is flash sync speed much slower than flash duration?