On my new Nikon D7100, when I set a longer exposure, instead of smooth transition, I can see the transition steps. It can bee seen on attached photo (the rough gradient in the sky)

Is it a problem of the settings? I didn't have this problem with my previous camera.

I also made some small experiment and tried to turn on Active D-lighting and decrease exposure compensation, it was really better. But I tried it on different place, so that I can not say whether it was caused by this and it should be "fixed" by turning it on.

Did anyone have this problem before or knows how to solve this? 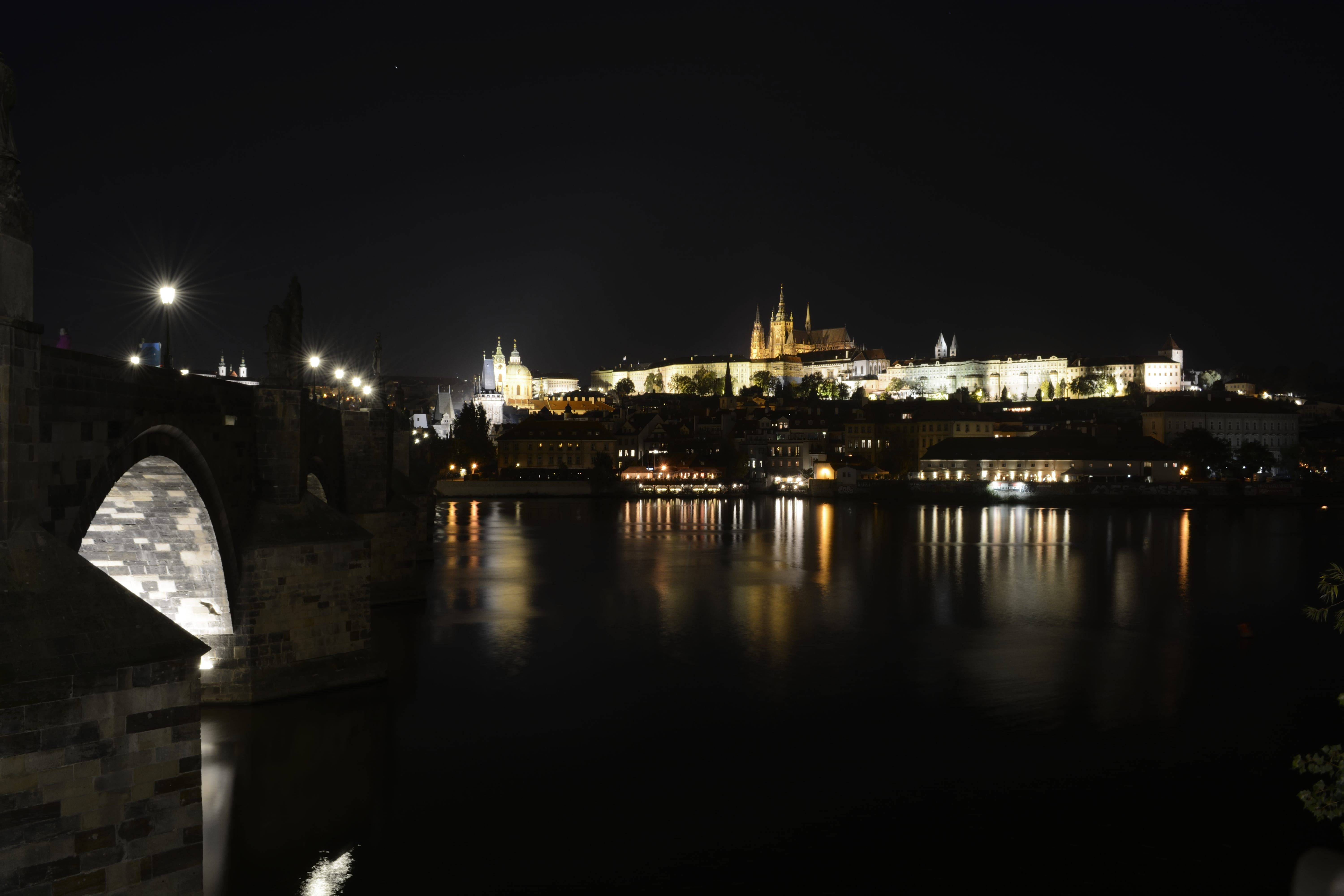 Thank you for your answers. The true is, it looks a little bit different with compression. But it is not caused by it.. This is link to the original NEF file

It's banding. There's a big potential for banding to be created when you edit color/exposure of an 8-bit (jpeg) file... especially in dark areas as there is already a lack of color/information in those areas.

There is also the potential for banding when an image is resized or viewed at a size smaller than 100% due to compression.

And there is also the potential that the banding you are seeing is due to a monitor/gamma limitation and it isn't actually in the image.

The common/quick method for eliminating banding is to add noise to those areas.

Some banding will be the result of how the image is generated.

Sensors have a more or less linear response.Each photon that hits the sensor pixel adds 1 or a small bunch of electrons to the storage well. This charge is measured at the end of the exposure and converted to a number. Now which number do we choose?

Most sensors out there now are either 12 bit or 14 bit. 12 bit gives us a range from 0 to 4096, overall a range of 12 stops. Given that cheap screens can manage only a range of about 6 stops, high quality black and white print papers only about 7 stops, and the human eye no better. (There's a reason we adjust our eyes f/stop (iris) when we come in from the sun, and why we like neutral density filters (sunglasses) when we go outside.)

But wait! It gets worse. This first problem can be compensated by mapping those big relative changes to small changes in brightness. But now you have to deal with turning 12 bits of image into an 8 bit pixel map for jpeg. This is part of the whole point about HDR, but if there are extensive areas of actual black then HDR algorithms don't always get it right.

And it gets still worse: A cheap LED display has in effect only 5-6 bits of luminance range. So either it, or your graphics card has to map 8 bits down to fewer bits.

Some cheap phone screens do not show pictures well. They tend to display images that look garishly over saturated, almost posterized.

As a photographer you have to be aware of what the target audience is using to look at the image, just as the old time guys who lugged view cameras around had to think about the characteristics of the film, the developer, and the paper. But while they had control of the print and the viewing conditions of the print, you don't have control. So you have to adjust.

This can be a problem for websites. You can include scripts to determine what is being used for viewing the image, and then keep several versions of an image on the server. The appropriate one is served. Right now that's mostly done on the basis of "serve smaller or cropped images to small displays" but as the capabilities of devices spreads, you may have to take this into account.

I suspect that the problem you are describing is actually banding in the preview, where you are viewing the photos, not any actual problem with the photo. In the JPEG, I don't see the banding issue that I think you are seeing in your ViewNX app. Compare against the JPEG you uploaded and verify if the sky "banding" appears the same to you or is better in the JPEG. I've had the same problem in CaptureOne and changed my settings for the generated previews to avoid seeing such banding.

Blooming: Exposing light bombards the image sensor. This is light energy projected by the lens. The image sensor is covered by millions of photosites. Photon hits induce a feeble electronic charge that accumulates within the photosite. Under the conditions represented by the posted image, the electron charges in the photosites that are over-exposed tend to leak into adjacent photosites. Thus what should be a single over-exposed pixel is seen as a streak. In other words, in scenes like this one, areas on the CCD become oversaturated. They leak to adjacent pixels; the results are seen as streaking.

Internal JPEG engine is not too good in producing smooth output in many cameras and may do very badly in certain cases, this is not specific to Nikon and may happen with many cameras (including mine which produces unberable JPEG output despite being quite pricey).

Desktop RAW editor is your way to go.

I have checked it right now in View NX 2. 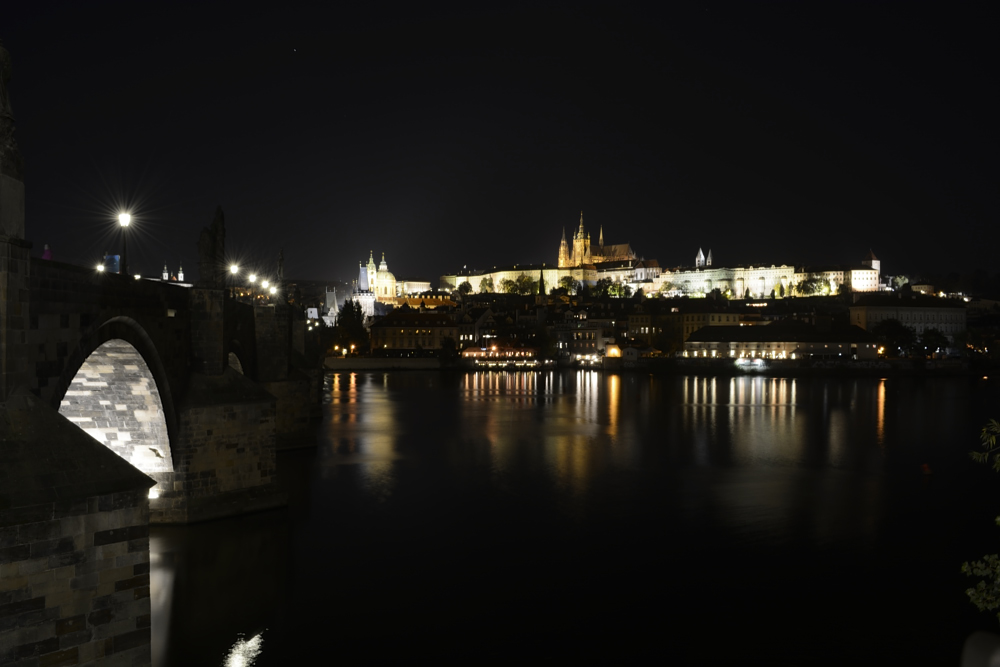 I have converted the RAW file to JPEG with default settings. Note that ViewNX does not display developed RAW preview but JPEG preview generated by camera and stored in the same file unless you click "RAW" button in the top left corner - click the button and most of posterisation disappears (as long as your LCD is good enough of course).

Also, there will always be some slight posterisation in sRGB JPEGs (inherently 8bit) because, while they are sufficient for vast majority of applications, most of adjacent tonal values in sRGB JPEG are perceptible. It is impossible to make a perceptually smooth gradient in sRGB (and in most 8bit spaces as well - I just cannot remember any) JPEG because making smooth gradient requires both the colour space of the image and the colour space of the output unit to have several colours between each pair of discrete colours. It happens so that displays are the factor which is harder to fight - most of LCD displays are 6 bit and have additional 2 bit from FRC and most videocards (from AMD/ATI, Nvidia and Intel) do not output 10 bit stream explicitly or do not output it at all.

You can use dithering to make the gradient smoother.

Not the answer you're looking for? Browse other questions tagged nikon exposure long-exposure night nikon-d7100 or ask your own question.

5
How to get a smooth gradient on sky?
0
16-bit wysiwyg image? Not RAW

1
How can I take long exposure photos with a webcam?
1
Do sensors absorb different spectrum of light at different rate, making longer exposures better for blue skies?
2
How to do a long exposure with a Nikon D60
5
Inconsistent exposure with same settings--why?
1
What does Exposure bias in EXIF means? Fujifilm xt1 tag(0x9650)
1
I dropped my Nikon D5100 and the mirror was stuck
13
Lighting up a subject during sunset without a flash?
3
What is causing dark pictures in Auto Exposure mode?
1
Emulate Shutter Duration on RAW Photos using Exposure Stacking