What does the temperature specification on a roll of film refer to?

What does these temperature indications mean? Some of the days I have been shooting have been hotter than 24°C. Will this affect the exposures? Or is this an indication for the development of the film? 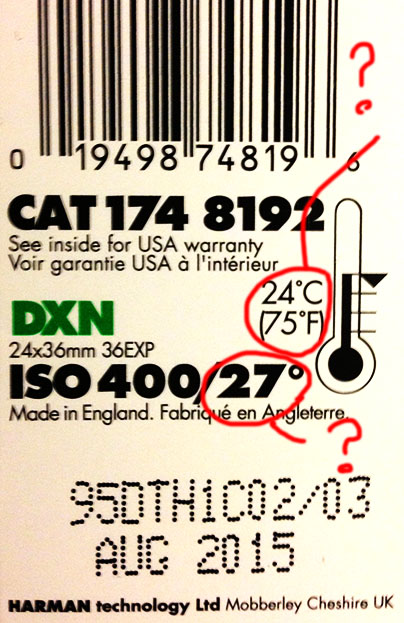 The 24°C (75°F) is the temperature below which the film should be maintained when stored for long periods of time. That is why many film photographers store their bulk film in a refrigerator. It will not harm the film to shoot it in conditions warmer than 24°C, but it will degrade it to store it in higher temperatures for extended periods.

The 27° is a reference to an alternate system of designating film speed known as DIN (named after the organization that defined the standard: Deutsches Institut für Normung). Each 3° in the DIN system equates to a doubling of sensitivity. DIN 30° would equate to ASA 800, while DIN 24° would equate to ASA 200. ASA 400 and DIN 27° are just two different ways of expressing the same sensitivity to light. Although the old logarithmic DIN component is no longer widely used, both it and the old arithmetic ASA component are included in the ISO standard. Digital camera manufacturers seem to stay strictly with the arithmetic scale (Hey, ISO 204800 sounds more impressive compared to ISO 6400 than DIN 54° does compared to DIN 39°). From Wikipedia:

The second number (27°) isn't a temperature, it is the DIN value -- a different system for measuring film speed. (That's why it's written right next to the ISO rating.)

4
What caused excessively high grain in Delta ISO 400 film developed by a shop?
3
How far can you push process an accidentally under-exposed film?
11
What is the rationale for having less than 36 frames in a single 35mm film roll?
3
Are overheated rolls of film (both exposed and unexposed) likely to be damaged?
21
Can I develop my b&w film a year after shooting it?
2
Can the Nikon L35AF use 36 exposure film?
5
Uneven tank development
3
How long can a 35mm film be used/stored before it starts to lose its quality after expiry?
4
Developing Problems, maybe with JOBO developing tank?
2
What is the cause of this very grey film base?