What is the cause of this very grey film base?

A year ago or so, I received a few expired films, among which this roll of Kodak Tri-X 400, expired in 2013. The film was shipped from the US to Europe. I stored the film in my freezer until I shot it last week, but it does not appear like it was stored cooled back in the US. As per the rule of thumb, I exposed for the film at 2/3 under box speed, so ISO 250.

I consider myself to be sufficiently proficient with home-development and have had no serious issues before, and so I was rather surprised to see the film come out of the tank with a thick grey base colour. I am aware of expired film being fogged after a considerable amount of time, but I have never seen anything as strong as this and I did not expect the film to be in such a poor state after a mere 7 years, especially since I am still shooting film from 1985 that's in much better shape.

So, my question: what is the cause of this grey base colour? Is it fogging indeed, or is something else at play here?

For good measure, I've also included a side-by-side with Catlabs X 80, which was developed in the same batch of chemicals just days prior:
Rodinal (Adonal)
Adox Stopper and Fixer 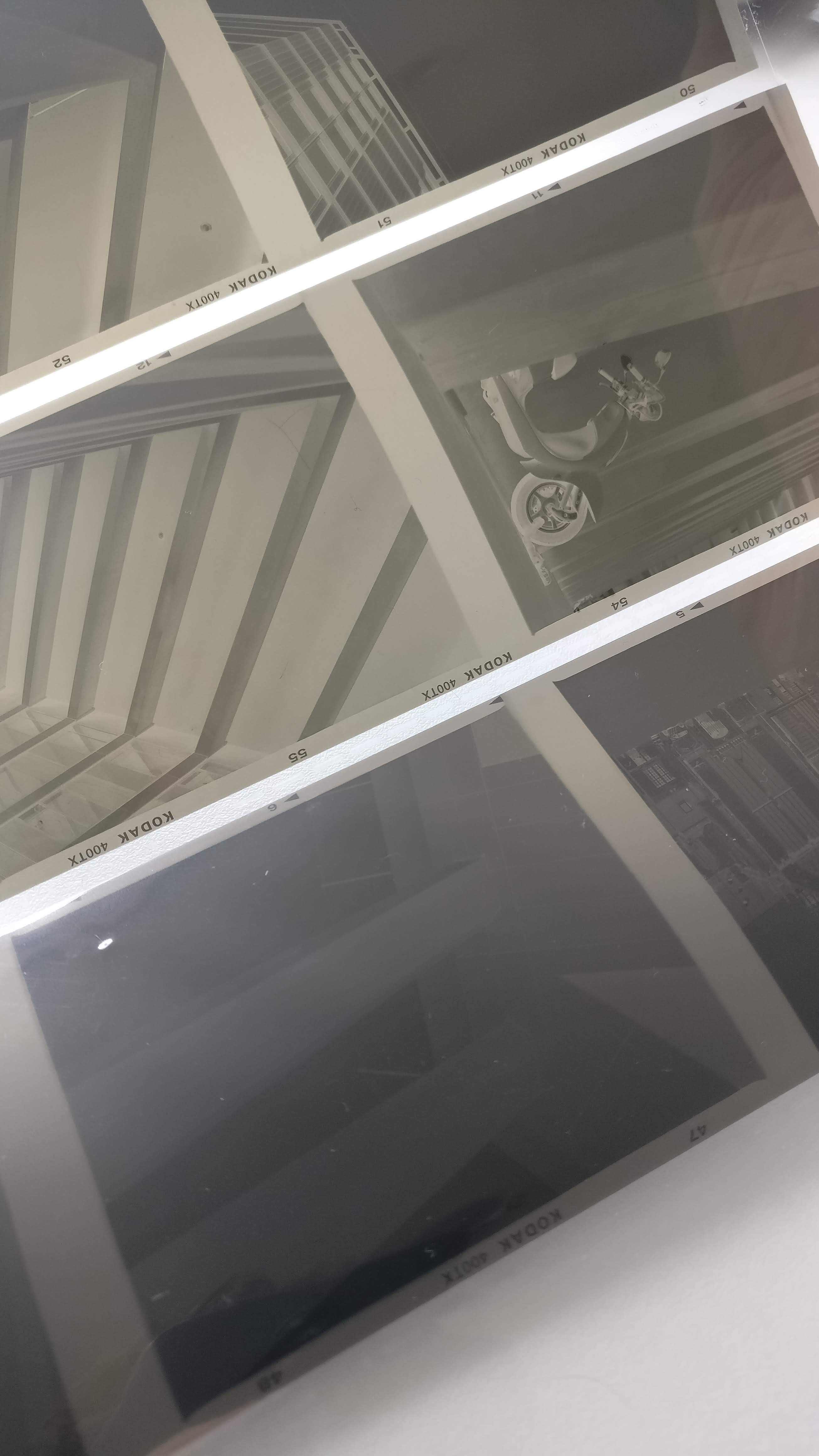 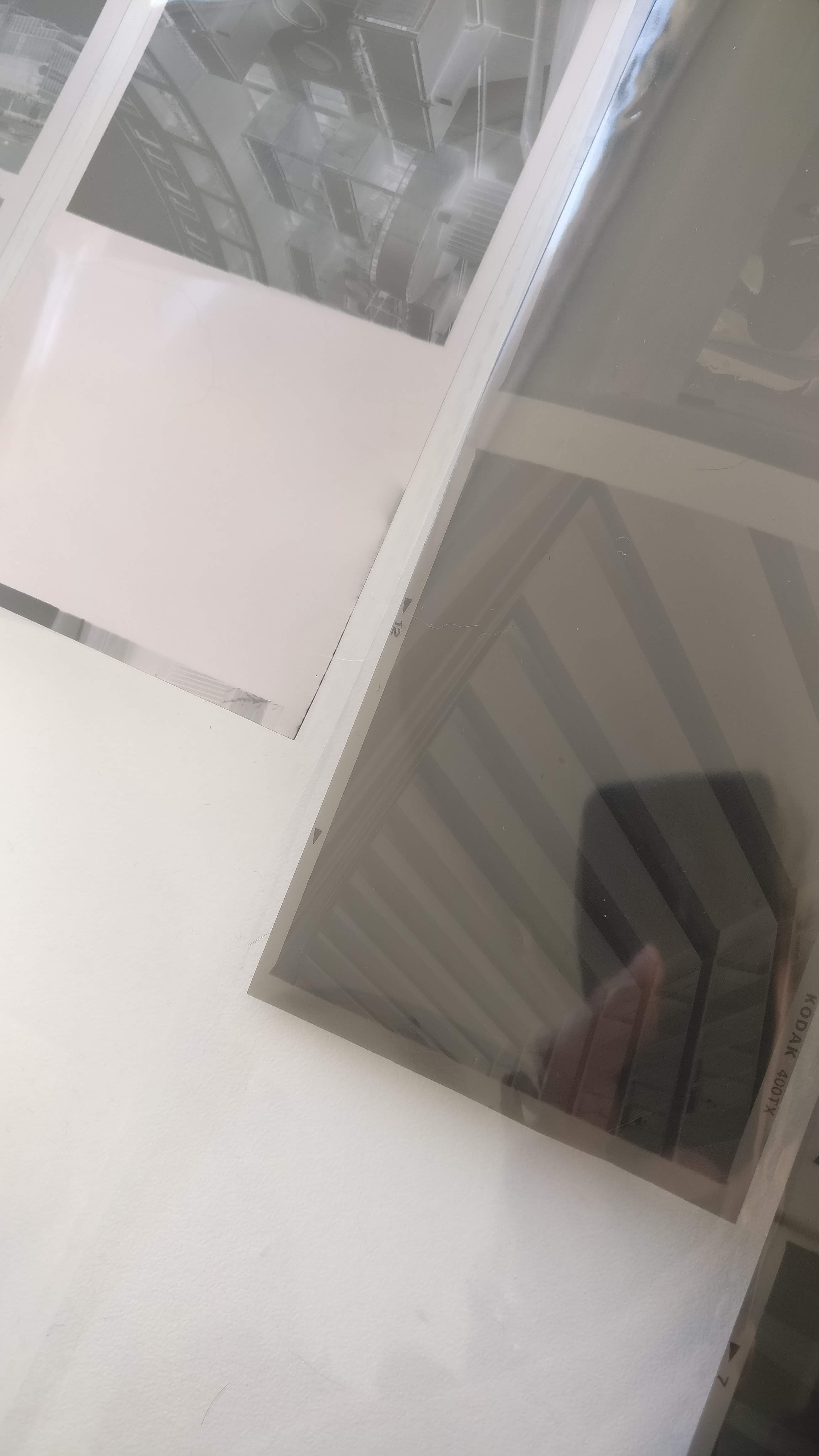 One possible source of fog is if one of the postal services involved chose to X-ray the package. An overall X-ray will produce general fog on the whole roll.

Another possibility is if there was more light in your darkroom or changing bag than expected when you loaded the film, though that fog source might not be completely uniform over the roll.

Most likely, however, it's just age fog. Expired films accumulate general fog at different rates, depending on the emulsion and storage conditions. If that film was stored at room temperature, six to seven years of expiry could produce fog like what you see. This is part of the reason you'd normally expose long-expired film at a lower EI than its box speed -- to ensure your shadows can be picked out of the base+fog Dmin.

For this reason, when I develop expired film (especially very old "found" film that may have been exposed a lifetime ago) I either use a developer with a strong anti-fog factor (old HC-110 was my first choice) or add an anti-fog to the developer mix (potassium iodide or benzotriazole, for instance).

In your existing case, having exposed 2/3 stop below box speed, you should still have good shadow detail above your base+fog that will allow you to print or scan the negatives and have good images (if you've done your job composing, framing, exposing, and focusing).

(Disclaimer 1: This is a bit of a comment-answer, since I'm not terribly confident in it given the information we have so far. But it's too long for a comment.)

Could this be inadequate fixing? I.e. one of the following:

If you used the same batch of working solution for the Catlabs and Tri-X batches, how was the solution stored in between, and when had it been mixed to begin with? While I can't find the information for Adox, Ilford quotes a working solution shelf life of 1 month for their Rapid Fixer (which ought to be similar) in a half-full capped bottle. If the fixer was near exhaustion to begin with, I think it's possible it got exhausted in between the two batches.

If you still have the working solution, you could test for exhaustion by dropping a piece of film in it and seeing how long it takes to clear.

If it turns out not to be the fixer, then I'd wonder about how the film got across the pond and if it was exposed to any sorts of X-rays – but then, based on what I've seen, I wouldn't expect such a uniform effect.

(Disclaimer 2: The comparison between Catlabs and Tri-X is a bit apples and oranges, since different films have different bases. But I have insufficient experience with Kodak films to judge how far from normal what we're seeing here is.)

Not the answer you're looking for? Browse other questions tagged film expired-film or ask your own question.

2
What Polaroid instant film type is this?
3
What are the factors that cause colour shifts in cross processed film?
0
Do grey cards work with film cameras?
8
What's the cause of this Leica M6 light leak?
5
What is a “film base”?
2
Negatives came out very thin
1
Possible cause of light leak in film SLR
2
Very long exposure with Ilford film
1
I bought a bag of 25 unopened boxes of KODAK Tri-X Pan 620 and 120 in the box film
1
How do 35mm film scanners deal with the film base color?