What is the rationale for having less than 36 frames in a single 35mm film roll?

36 frames per roll have long been the agreed upon standard. It allows to fit the maximum amount of frames in a canister and still have some slack for safely loading the film, because one's loading technique can be less than perfect and also because the distance between the loaded film roll and take-up spool can vary greatly from one camera to another.

Before roll film there was sheet film.

With sheet film a photographer could select particular films with particular emulsions individually for every shot they took. Applicable characteristics of a film's emulsion would include sensitivity/film speed, fineness of grain, color response/balancing, contrast, as well as the overall 'look' that different films might provide.

The main advantage of roll film loaded in a light-proof cartridge is the speed at which consecutive shots can be taken and the convenience of having multiple shots in a single, compact, light proof container. The main disadvantage of roll film is that it locks a photographer into a single emulsion for the entire roll.

Of course there are various techniques for unloading and later reloading roll film cartridges. But depending on the design of the camera involved it is, at best, a royal pain. At worst it is highly problematic and can almost certainly mean losing parts of some of the exposed images if not done correctly.

Prior to 1934 when Kodak introduced the single use cassette everyone had to load their own roll film onto spools or cassettes that came with the camera. Rumour has it that Oskar Barnack, who was the driving force behind the first mass marketed 135 camera - the first Leica introduced by Ernst Leitz in 1924, selected the 36 frame length because five feet was the maximum length he could wipe holding one end in his left hand and wiping it with his right hand without having to place it in a holder.

From A Brief History of Photography – Part 13: The Early Story of Leica, Short Version

Other features introduced in the Ur-Leica included a combined film advance and shutter cocking mechanism, which eliminated unintentional double exposures, and the accessory shoe, to hold the external viewfinder. The basic design of the accessory shoe has survived dimensionally unchanged to the modern day, evolving along the way to incorporate hot shoe functionality for electronic flash, etc. The camera was originally designed to hold a length of film incorporating 40 frames, but the film had to be loaded and unloaded in the dark. To address this limitation, Barnak then developed a reloadable film cassette that could be loaded and unloaded from the camera in broad daylight. The size of the cassette dictated that the film length be reduced to 36 frames per roll, the standard seen in 35mm film cassettes today. (Leica legend has it that the real reason for the 36 exposure roll length came from the length of film Barnak could hold in his outstretched arms – feel free to believe the version you prefer!) 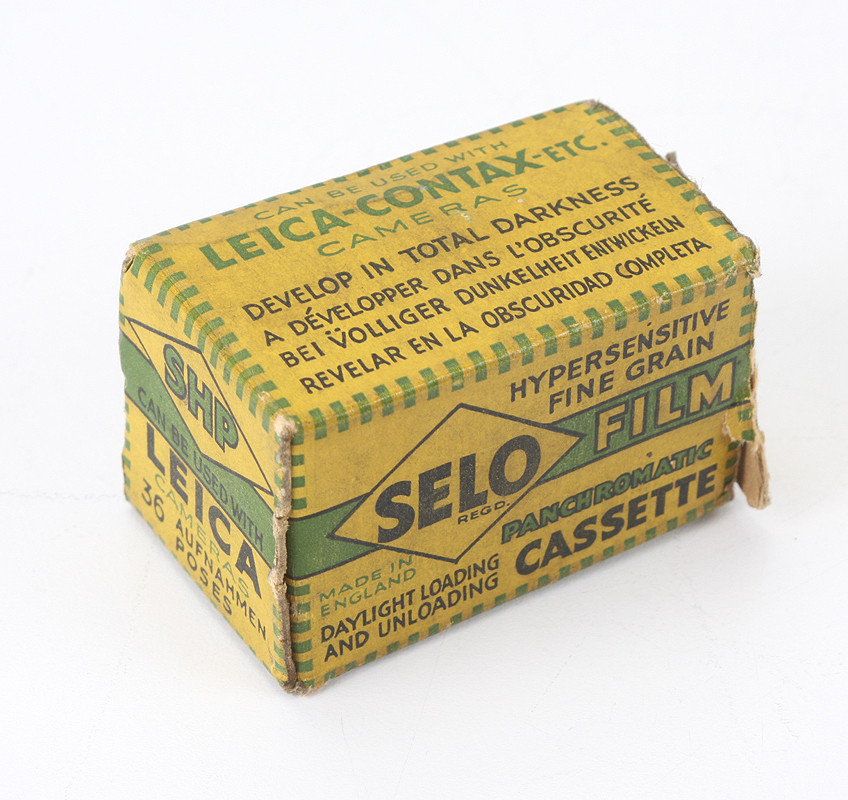 Preloaded 36 exposure rolls have been available in 135 format since Kodak introduced preloaded single use cassettes in 1934. That was what would fit in the cassette at the time. Shorter 'half rolls' were introduced with 18 frames that soon grew to 20. Up until about 1980 the two sizes available for most 135 film were 20 and 36 exposure rolls. Around 1980 the 24 exposure roll was introduced and gradually replaced the 20 exposure roll. It happened faster with negative film than with positive slide film. When I got into 35mm photography in the mid 1980s 24 frames were common for negative film, but slides film was still usually sold in 20 frame rolls. (Before that I had been shooting in the square 126 cartridge format and the tiny 110 cartridge film. The film was too small and the cheap plastic lenses on the dime store cameras that used 110 were awful.)

If you loaded the camera carefully and used the absolute minimum amount of leader you might get 39 frames out of a 36 shot roll. I routinely got 26 and occasionally 27 frames out of a standard 24 frame roll. With later thinner film substrates in became possible to fit enough length for around 42-45 frames into a standard 135 film cassette, depending on how tightly you were willing to roll it (which increased the risk of scratching the film as it was rolled in and out of the cartridge).

Ilford once produced a very thin polyester based 72 frame variety of B&W 135 film, but it curled horribly and wouldn't lay flat against the camera's back plate. It also required specialized developing equipment to handle the longer length.

Many high volume photographers bought their 135 film in bulk until the end of the film era and loaded it into reloadable cassettes themselves. Of course this had to be done in a completely dark environment or with a "daylight loader" that was filled with about 100 feet (about 800 frames worth, less the amount used by the leader for each roll) in the darkroom and then could be used to load 135 cassettes in daylight conditions.

Some of the people who preferred shorter film lengths:

8-10 shot 135 film was often labeled "Insurance agent" and 12 shot rolls were sometimes marketed as "reporter rolls" in commercial sales channels. Although a few retail sales channels carried 8-10-12 exposure rolls it was fairly rare (other than the occasional promotional 'sample' roll giveaway at large camera stores). Most of those very short rolls were sold through commercial supply companies.

Just my notions, but some people did not take so many pictures. It might take weeks or months before they would expect to accumulate 36 exposures. Rolls of 24 were a little less expensive, and less to process, and served the immediate need better. About the same reason you might buy only a few tomatoes at the grocery store, instead of a bushel. Roll film cameras typically only took about 12 exposures.

The heaviest purchaser of film was the amateur photographer community. They purchased film at the drugstore and returned it there. This was a two event purchase. This tended to disguise the total cost. In the height of the black & white era, $1.00 for the film, $1.00 to develop the roll and $0.10 per print. The 35mm cassette held 20 exposures however 12 exposure rolls could be had but they were rare. With the advent of thinner base materials, color and black and white rolls were available in 24 and 36 exposure cassettes. Most kept the film in the camera for about a year. Color negative film was about $3.00 per roll and developing cost $1.00 for the film and $0.30 per print. The average order contained 18 good negatives. The cost to develop averaged $6.40. I lived this era first hand, operated 7 labs, each able to develop and print 20,000 rolls per day. The answer is reaction to market needs (always).

Making picture was expensive (film, developing and printing), so for a day or a short weekend, it make not sense to have too much pictures. Films should be developed also relatively quickly, before you forgot exact the day you made the photo (for annotation, "tagging")

The "culture" was different, one made a photo to remain "forever", and 36 are many. If one put 100 photos in an album for a week holiday, I think the probability that that photo are watched a second time is very low.

Additionally ISO was "set on film", so if one wanted to do some interior and some landscape photography, there were few possibilities: a good gear with very high speed shouter, or just mediocre photos. Note: evening and night photos were also seldom (by non professionals) for this reason.

When I was learning to do B&W photography, I was 6 years old. My dad showed me how to cut 12-frame segments from a 5 m roll (holding it up against a stick with notches, in the complete darkness of a bathroom with towels stuffed under the crack in the door), then load this into the canister. We would take some pictures, come home, and develop the resulting film. If there were any good pictures, we'd do contact prints, and perhaps enlarge one or two. This gave immediate feedback - when you are just learning the basics of photography, and you are an impatient young child, this is a terrific advantage.

Of course doing it all ourselves saved both time and (some) money - but mostly, the satisfaction of seeing "what works and what doesn't", with a short turnaround time, was the key thing.

These days, we are used to seeing the picture the moment we take it - and many of us have become better photographers for it. But before the days of "instant" feedback, short film was the next best thing.

Not the answer you're looking for? Browse other questions tagged film 35mm history or ask your own question.

4
What does the ISO setting for mechanical 35mm film cameras actually do?
2
Film advance lever stuck on Canon ae-1 Program

5
Multiple exposures on medium format film
6
How can I hack 35mm film into a 120mm camera and have it safely received?
3
My roll of film didn't rewind inside all the way
5
My 35 mm film is not rewinding into canister — was the roll even used?
1
Film did not rewind
0
Batch scanning of family archive: speed of flatbed vs. film scanners?
4
Film photography - what causes the following effect/error on a single frame of a developed roll of film?
1
What causes these light leaks on bulk loaded film
0
Camera light leak or processing issue?