Going back in time, films used to respond to a more limited range of the visible light spectrum. These orthochromatic films, unlike today's more common panchromatic films, were very sensitive to blue light, had accurate tonal representation of yellow and green light, but were hardly sensitive to orange. The films could be exposed to red light, barely (or not, rather) sensitising the film's emulsion.
The latter is also why darkrooms to this day use red lights, as with black-and-white printing orthochromatic photographic paper is used.

Panchromatic film, which today has mostly displaced orthochromatic films, does respond to higher (red) wavelengths and some films even cover the infrared spectrum.

Seeing as how the orthochromatic films responded mostly to blue light, would using a blue filter on modern panchromatic film replicate the tonal representation of ortho film? Using a blue filter would deny (most) of red light to pass through, onto the film.
I could not find the answer to this question online, but I have my doubts at my own theory. Mainly, using a blue filter would also mean a decreased sensitivity to yellow/green. As I have a limit knowledge on what filters are exactly out there, perhaps there is a filter (combination) that would come close, if not perfectly replicate this?

You can simulate the spectral response with filters. To cut red, use a cyan or blue-green filter. To select for blue or green, use a blue or green filter. If you can find the response curve of the films you're interested in, you can look for corresponding filters. Otherwise, you should shoot some test rolls to compare filters against.

You can see density curves for Kodak filters. Some recommend trying a Wratten 44A filter. (Light blue-green. Minus-red filter.) 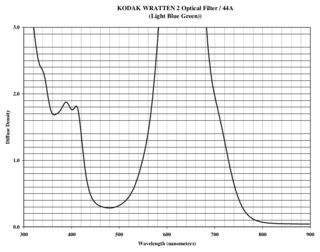 For comparison, here's the curve of the Kodak 38A filter. (Blue. Absorbs red, some UV, and green light.) 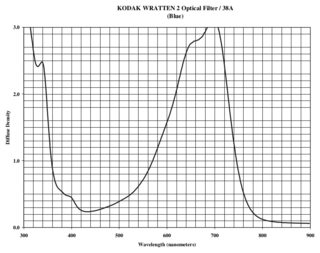 I think a blue filter would come close in terms of killing reds. I've used orthochromatic film for LF, which I think you can still get on occasion: the one I used was branded Rollei but I think was actually Adox, who in turn are related to Agfa and Efke in ways I don't understand. For those recent films what a blue filter would not do is give you the kind of very high contrast that they had, but I don't know if historical orthochromatic films had that property.

Not the answer you're looking for? Browse other questions tagged film filters black-and-white or ask your own question.

1
Can I measure the Wratten Number of a Filter?
7
Is this blue tint because of the film or the process?
1
Is there a way to replicate the look of Allen-Khondji Midnight in Paris and To Rome With Love?
5
Green Fog in Color Negative Scan
3
Can you use filters (CPL/UV/ND8) made for digital cameras with a film camera?
16
What colour scheme for model aircraft should I use to give a realistic black and white film photo?
3
Does black and white film have any advantage over black and white effects in digital?
0
Mirrorless cameras with a film look?
2
Why does light-colored skin look different in black and white versus digitally desaturated versions of color originals
2
Why is my colour film developing leaving my film looking purple/giving blue tints to the photos?