What are the artistic effects of different catchlight positions?

Is there comparison of different position of catchlight in person's eyes?

My point is that you can get roughly same lighting but with slightly different position of catchlight (light source reflection) in person eye. Is there are artistic differences between reflection being on the edge of an eye, or for example closer to iris?

Here is what "catch light" is: 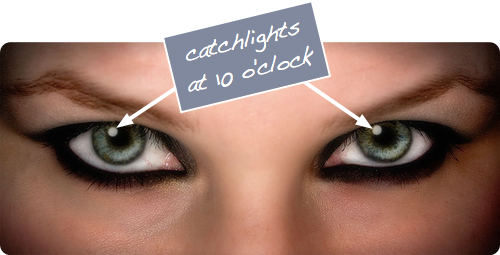 I don't think there are any hard and fast rules for catch-lights, other than maybe, "have them."

The lighting affects, literally, every part of the shot. The catch-light is simply the light's effect on the eyes alone. In order to change the catch-light, one would have to change everything else about the lighting used in the portrait - and that's usually less desirable. Phrased another way - you should set your lighting for the portrait as a whole, and then adjust the light position incrementally to make sure that you are capturing a catch-light. You shouldn't start with a good catch-light and then try to light the rest of the scene.

Long story short - beauty is in the eye of the beholder - but I think we can all agree that when it comes to catch-lights, it's only important that they're there.

My belief: Eyes without catchlights appear dead. Catchlights are best as a single point of light in each at about the 10 o’clock or 2 o’clock position. The idea is to preserve an illusion that the face is illumined by a single light source coming from above. Additionally, a rectangular or other shape large catchlight is useful when the subject is illuminated by a window etc. Also, there are no rules in art, you are free to follow your heart.

Not the answer you're looking for? Browse other questions tagged lighting portrait eyes or ask your own question.

26
In portrait photography, what is a “catchlight”?
13
Is there a difference between a large, far light source, and a small, close one?
12
What are the effects of umbrella size?
5
Profile Silhouettes and Rim Lights: How to Do it Right?
4
These photos were taken to show the different effects of light, but what's actually different?
10
How do I compare a continuous light panel's brightness vs. flash through a softbox?
1
How to use fixed power flash (strobes) units?
17
How to photograph sparkly objects?
1
What are the different types of light brackets?
5
How do I avoid getting different sized pupils when shading half of the model's face?