How to photograph sparkly objects?

I've been having the hardest time photographing objects that are encrusted in rhinestones and capturing their sparkle.

I've looked at various other answers on this site, but I'm still left wanting a truly "sparkly" picture. I've tried:

No matter what I do, I get more diffuse light (which is good for giving the overall appearance of the object), but very little sparkle. I understand that sparkle is small, bright points of light shining back at the camera, from the mirrored surface of the rhinestone facets, but somehow it never seems enough when captured by the camera.

Perhaps the real question is: how do you show sparkle on a low dynamic-range display? How do you capture it and if it's not easy to capture, is there a way to convince your eye to see something as sparkly?

Here's an example of a shot that I've been trying to make more sparkly: 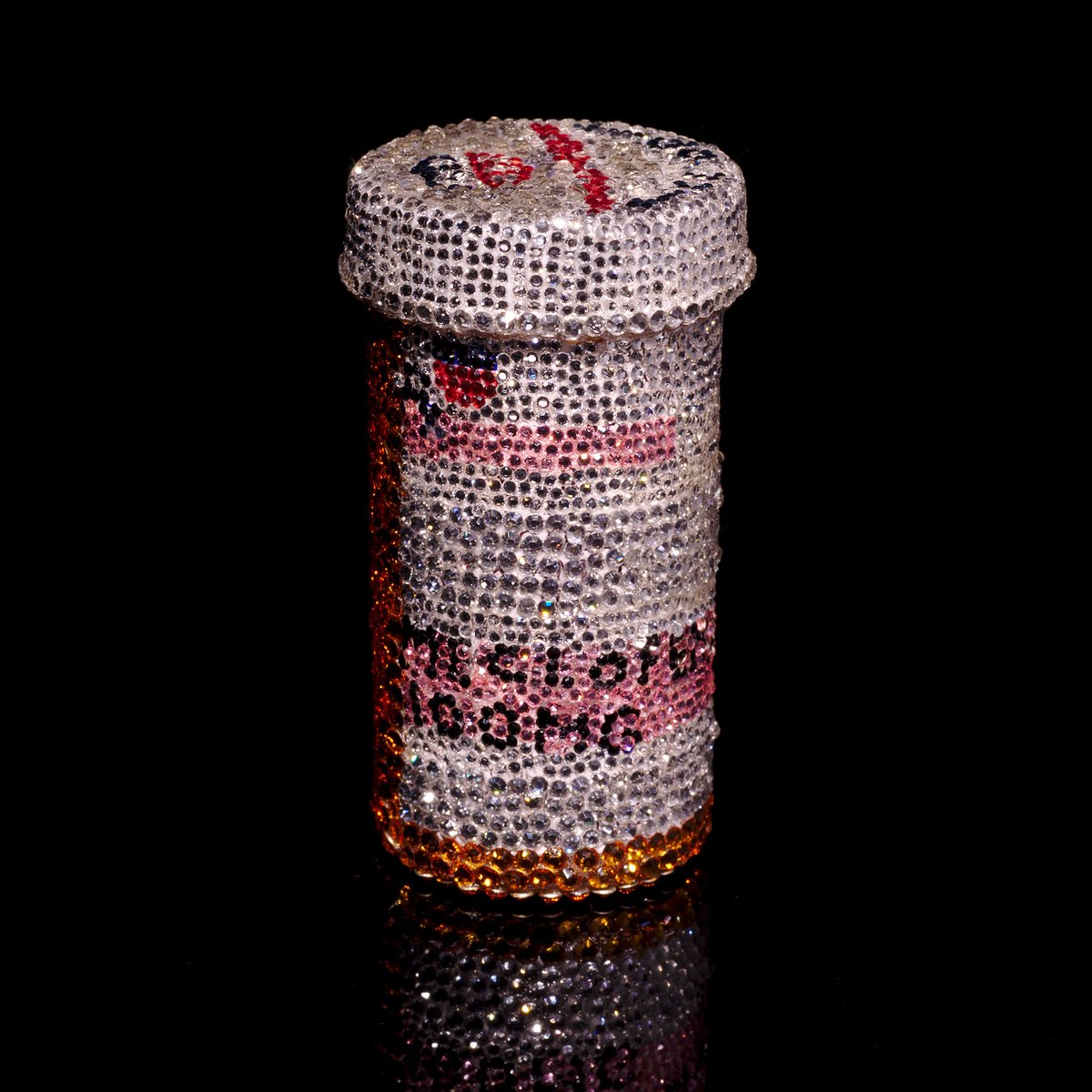 (artwork by Judith Klausner, photo by myself)

The above photo was lit by a single halogen bulb above the camera and a flash pointed directly at it off to the right and above the camera. It was taken within a diffusion box with the front entirely open and black velvet on the left / back side, and black acrylic underneath it all. 90mm manual prime macro lens on a D600 at F16 with a 1.3" exposure.

First of all, it's important to realize that, when you photograph a reflective object, you're actually photographing the surrounding scenery as it reflects off the object. This means that it's not enough to just set the object in a lightbox and maybe point some spot lights at it, at least unless you want to make the reflections rather simple and dull.

Instead, what you want, to give the reflections contrast and "sparkle" (not actual sparkle, defined as small spots bright enough to produce visible flaring in the photo, but just the appearance of glitter) is to surround the object with high-contrast scenery that produces the appropriate look when reflected off the object. (Of course, you usually need to leave some neutral background behind the object, but this need not be a large area, especially if you use a long lens.) This is as much an art as science, but here are a few things to try:

As for actual sparkles, these are formed when a small fraction of the facets in the object reflect something so bright that it saturates the camera (or the eye) and creates flares. If your object has enough small facets, just pointing a single bright light source at it will indeed produce sparkles. If not, you may need to use multiple small point lights (such as LEDs, halogen lights or small mirror reflectors pointed at the object) to obtain more sparkles.

One trick you can use is to fix the object and the camera in place, and then move the point lights around until you get nice sparkles from each of them. For a more natural-looking result, you may also want to preferentially place the sparkle sources in "natural" locations, such as in the lighter parts of the surroundings or near the main light source.

Also note that the appearance of the sparkles will strongly depend on your camera and lens. For pretty "starburst" sparkles, you'll probably want to use a narrow aperture and/or a cross-screen ("star") filter. This page from SLR Lounge shows some nice examples of the effect of aperture on sparkles in photos: 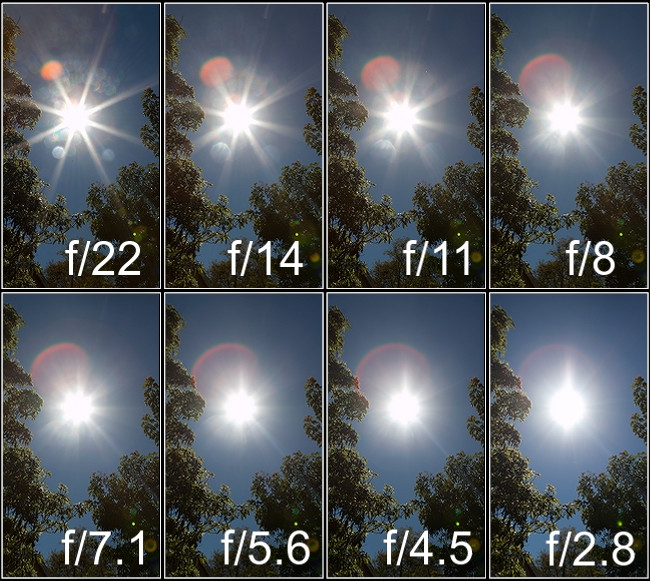 (Image from SLR Lounge, used under the CC-By-ND 3.0 license.)

Finally, note that dynamic range is very important here. The notable thing about sparkles is that they're much brighter than the rest of the object. You can't really reproduce the true intensity of the sparkles on screen (or on paper), even if your camera could record it in the first place, so you have to find ways to give the impression of brightness without the actual brightness.

Starbursts are one way of achieving this; so is the use of a dark reflective surface, as you've done, as it effectively gives the viewer two pictures of the object, taken with different exposures, that the brain can combine to reconstruct more of the dynamic range you'd see if you were looking at the object directly.

Ps. I wrote most of the above before you posted your example photo. Having seen it, my specific suggestions would be to:

I've been working on solving the same issue. I have 3 cameras and discovered (believe it or not) that my simple iPhone camera did the best job. I make jewelry with lots of sparkle and iridescence in it, and had trouble reproducing the sparkle until I tried the iPhone.

I had to experiment a bit with lighting, but it didn't involve a lot of different experiments. I tried daylight, incandescent, and then different backgrounds. When I placed the pendant on a light background, I got the worst results, but when I tried a solid color (red, black or medium gray), I got the best results.

I also tried shining a little flashlight on the pendant while photographing it (as suggested in a great answer above) and that was good too.

For those who are not super familiar with taking macro shots with an iphone: Once you have the item showing on your screen, touch the area of the screen that you want the camera to focus on, then click the pic. Super simple, love it.

Why do diamonds lose their fire in photographs? I want to photograph the rainbow colors (red, orange, yellow, green, blue, indigo, violet) which are refracted out of a drop of water in the sunlight. There are two requirements for getting the fire in a photograph: One, having enough megapixels to catch the color in a tiny spot at a distance, and Two, having a lens that is small enough across the front surface to fit into the span of a single refracted color. The reason diamonds look white, without the flash of color is the white point-source of light is split up into bands of color coming out of the diamond, and the lenses of fancy cameras are so large as to catch all of those colors across the front surface (at a close distance) and they re-focus all of those colors back to a single (group of bayer) pixel(s) which convert the colors back into a white spot. This is like having two prisms, one to refract the white light into colors (the diamond), and another which re-merges the colors back into white light (the lens). Unless your lens is small enough to fall into a single band of color (like a cell phone lens), it will re-merge the colors coming out of the single point of the diamond. We can sometimes see the color in the bokeh, if we unfocus the subject diamond; but then we can't see the facets clearly.

Not the answer you're looking for? Browse other questions tagged lighting product-photography jewelry or ask your own question.

1
How to Take a Photo of a Shining Object
26
How to photograph frost and snow sparkling?
13
What are the key things to think about when photographing jewelry?
8
What's the actual physics of diffusion filters?
6
How to set up a diamond for photography?
4
What should I consider when getting a camera for product photography?

4
Does the diameter of openings on photographic lighting grids affect brightness?
20
How can I photograph a reflective convex cylindrical trophy without reflections?
13
How to meter to clear subject details with a strongly backlit scene, as Elena Shumilova does?
1
How to get more clarity and less shadow when photographing jewelry?
5
How do I recreate this type of photograph - watches reflected in water
5
Shadowless Product Photography with illuminated bottom?
3
How do I photograph jewelry while being worn?
1
Cross-polarization with multiple lights, multiple cameras on large objects in 360
2
Get correct focus on low light with modelling light