What are the different kind of light modifiers and their uses?

Particularly with an emphasis on studio setups and portraits, what are the different kind of light modifiers (softboxes, umbrellas, etc) and what are they used for?

For bonus points, what kinds of household items, if any, can be easily substituted (if even on a small scale)?

EDIT: So, apparently this was broader than I realize (I knew I was casting a wide net, but I think I underestimated the knowledge and gumption of our community). I wouldn't hold it against anybody to just hit some major ones.

Wow, this is an extremely broad question, as there are dozens of light modifiers, but I'll cover the most important ones for strobe lights.

Generally speaking, light modifiers are all about controlling light. Whatever you decide to do with, you want to keep a reign on it. As such, we can split modifiers into two main groups: soft and hard modifiers.

Modifiers that soften light generally work by diffusing it - spreading it out over a large surface so that light rays are scattered. They are used anywhere you want to reduce shadows and make things look smoother. Their number one use is for key lights in people photography.

The most popular of these modifiers are umbrellas and softboxes.

Umbrellas come in all shapes and sizes, from tiny ones to ones over 3 meters across, and are easily the most popular modifier you will find. Their main advantages are their small size, low price and versatility - you can shoot with a folded reflective umbrella for a very specific light quality. Their biggest disadvantage is a lack of control they give over light spills.

There is really no home-brew solution for umbrellas. They are extremely cheap (< $10), which is about as much as a real umbrella you would have to hack up costs.

Softboxes are what most people think of when they think of studio photography, so they make a good impression if someone's coming to pose for you. Using additional modifiers, like a grid, flag or filter on top of your softbox can give you even more control.

The key in softboxes is diffusion, you don't need to literally make a softbox, you can throw a bedsheet over a broomstick supported by two chairs and you'll make yourself an excellent, soft light source. You can literally make a soft box by lining a cardboard box with aluminum foil and pulling a sheet over it, but the comedic effect while shooting portraits might be a bit too much.

Hard light is the default with strobes - that's what we get when we fire off a speedlite or on-camera flash. A small point of light that brings out imperfections and coarse textures. Shoot it from the side and it'll make a child look like they have awful skin. Still, it's extremely useful to have controlled beams of light (think: rimlights/hairlights) and it's absolutely critical in product photography.

There are four basic types of hard modifiers:

As far as DIY solutions, Strobist has a huge DIY section, but be warned: a lot of the store-bought stuff is a lot sturdier and gives better results than the DIY equivalents. You can fake a snoot on a speedlight using a cardboard tube painted black on the inside, but past that... just get the chinese knock-off. Again, instead of recreating these modifiers in a home setting, look at what they do with the light and try to emulate that. A single soft light source as a key, a big piece of white paper as a reflector will give you very nice results. You can always cut up the paper, replace part of it with aluminium foil, put a flag between your model's eyes and the light source, etc. The possibilities are endless.

Remember, light is just light, most of these modifiers can be (and are!) mixed and matched: grids on snoots, diffusion material on beauty dishes, grids on softboxes (these are almost always cloth), silver backs for shoot through umbrellas, etc. There are also tons of different names for everything I've listed above, I just used the ones I'm most common with.

Three critical components of studio work that I didn't cover as they aren't strictly light modifiers, but are worth talking over: flags, scrimms and bounces.

That should cover it, I'll update if anything else comes to mind.

When discussing the effects of various modifiers, I find this cheat sheet from DIYPhotography to be extremely helpful, as it provides a visual language for the various options. 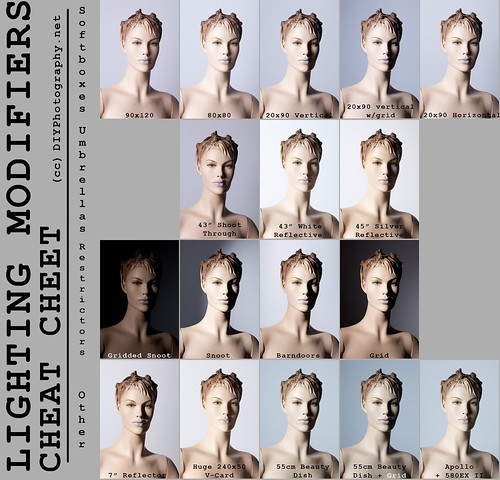 Wow, big question... Here's the parts that I know (or think I know grin) anyways:

Now... A lot of these kinds of things can be made at home for very little. I have a lengthy tutorial on doing a some of these for a speedlight, but those won't translate up to studio strobes, they're quite a different beast when it comes to heat and power, it's better to buy the gear there. Other people have done light diffusion using things like tupperware, paper, roasting pans, and more. The DIY Photography site has tons of articles on this sort of thing, it's a gold mine of info (and you'll trip across my tutorial there which was flattering to me).

So, that's my basic knowledge of the stuff. I'm sure much more detail can be added and there are a few that I didn't cover because I haven't used them. These are the mods that I personally have (for studio strobes and speedlights) and use, so my info is just my observations on them.

26
In portrait photography, what is a "catchlight"?
4
What are the possible artificial light "sources"?