How can I automatically correct aerial perspective in landscape photographs?

Because different wavelengths of light are scattered differently in air (there are actually two distinct types of scattering involved) light on the red end of the spectrum is scattered far more than light on the blue end, so things in the distance appear blue and somewhat washed out — aerial perspective.

I have a large number of photos. I know the distance to the subject in every photo. It is large enough that their is some aerial perspective, which they would look better without. I want to correct it automatically based on the distance involved. I don't want to correct them by hand.

Yes, I know these would depend on all sorts of factors to get exact just like the color of the sky does, but I'm sure someone has studied reasonable averages for middle of the day photos.

The above is what I am really after, but if nobody can answer that, the simple version is this: If I know the distance D in a photo to a subject, what percentages would I use to mix the subject photographed close up and the sky to the get the same aerial perspective effect. This really isn't the same, but if it is the best I can get, I will take it.

Answer to the question OK, I haven't worked out all the details yet but this might make for a quick cheap answer. I am still interested in a real answer if anybody know one.

Then assume the effect is linear in the amount of air (by mass, i.e. use the density of air at sea level to figure how much air you are seeing something through at distance D)

Then you can assume your object has been averaged with that much average sky photo, so subtract off that much sky spectrum and renormalize to make up for the amount of stuff you subtracted off.

Here is an average blue sky color spectrum from wikipedia. 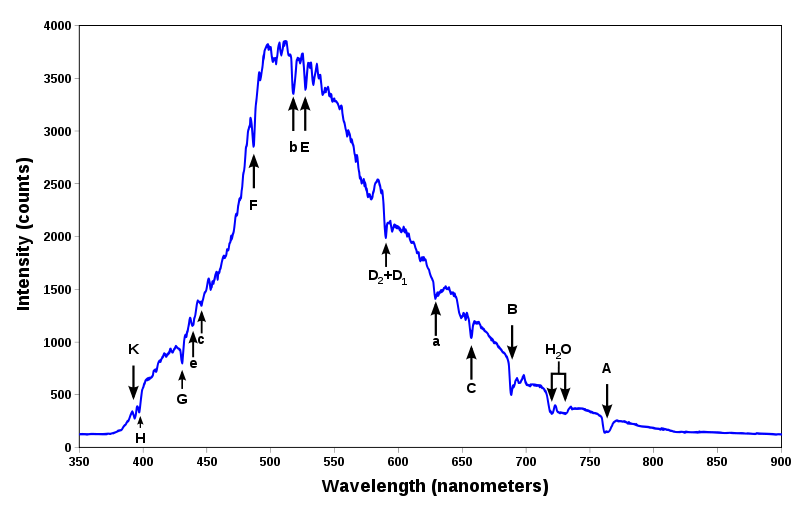 P.S. It might be interesting to apply this "undoing aerial perspective" to rainbow pictures to see what you get, since rainbows are obviously typically more blue and washed out than they should be due to aerial perspective. Not sure what distance to use off the cuff since they are an accumulated effect over a bunch of rain (i.e. not at fixed distance) but probably estimating half the distance from yourself to the edge of the storm would be a good start.

There has been work on image processing of this sort. The typical terminology would be something like "Blind haze removal", where "blind" would refer to the processor having no special information about the image, just the pixels.

There is an example and link to the relevant scientific paper on this Github project. It uses Matlab ( a mathematics software package ! ). I'm not aware of a specific general plug-in for any graphics application, although there may be one. Be cautious with those as most will probably be based on quite simplistic approaches which are not generally effective.

If you want to correct the image by haze or mist, you should read this thread at Rational painting forum :

You should forget wavelengths and extravagances such as Mie scattering and Rayleigh scattering, because the law governing the artist model is more basic : exponential

The formula was derived from Beer-Lambert-Koschmeider equation You should use RGB[0,255] color notations, gamma-corrected I'm a painter and use it extensively, is very easy to use when you grasp the variables, I built an excel worksheet that make the job for me ...

1) Set the Visual Range (D) from observer where the constrast decays to 2% 2) Set the RGB "true" (local) color for the object to project into the mist 3) Set the distance (d) where you want to put the object in the mist 4) Set the Gamma correction factor (i.e. 2.4) 5) Apply formulae explained in attached files

The rest of the explanation you could seen it in those files, the last one is a test showing how it works in a real case 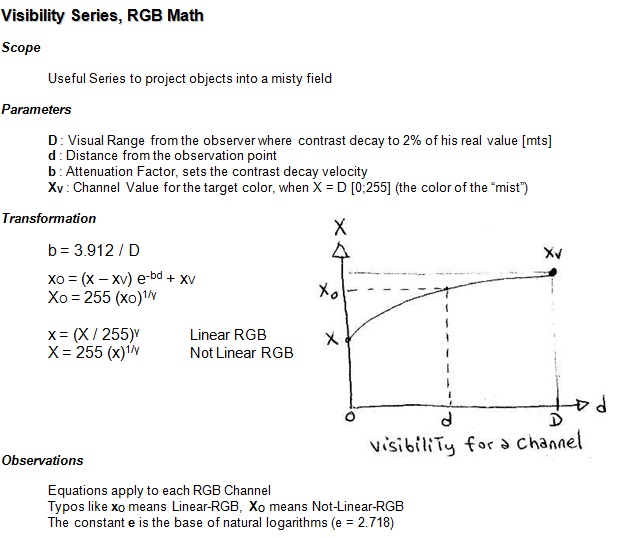 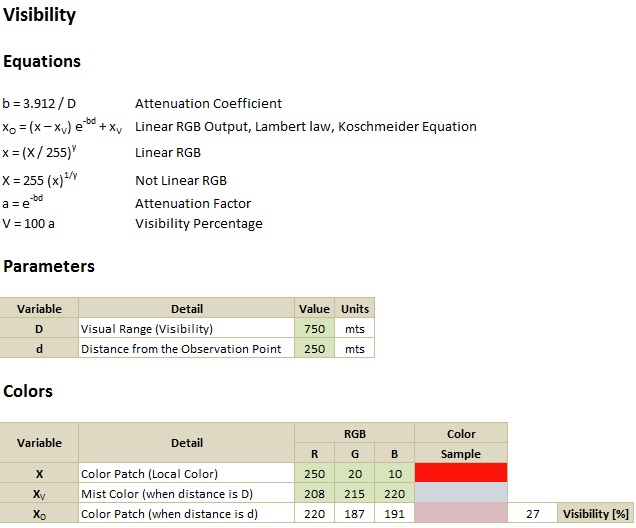 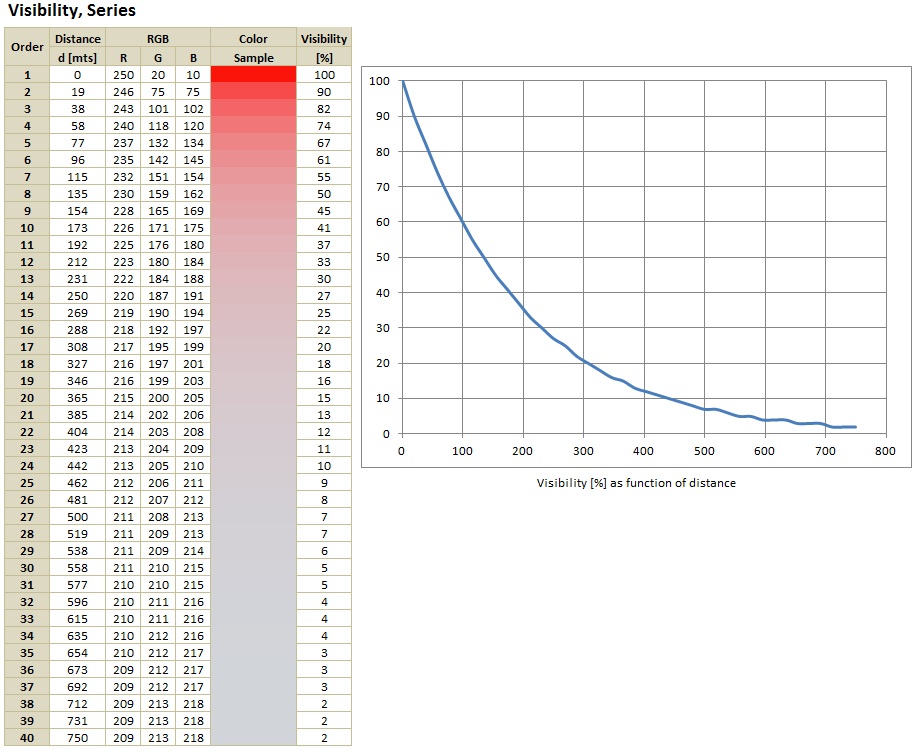 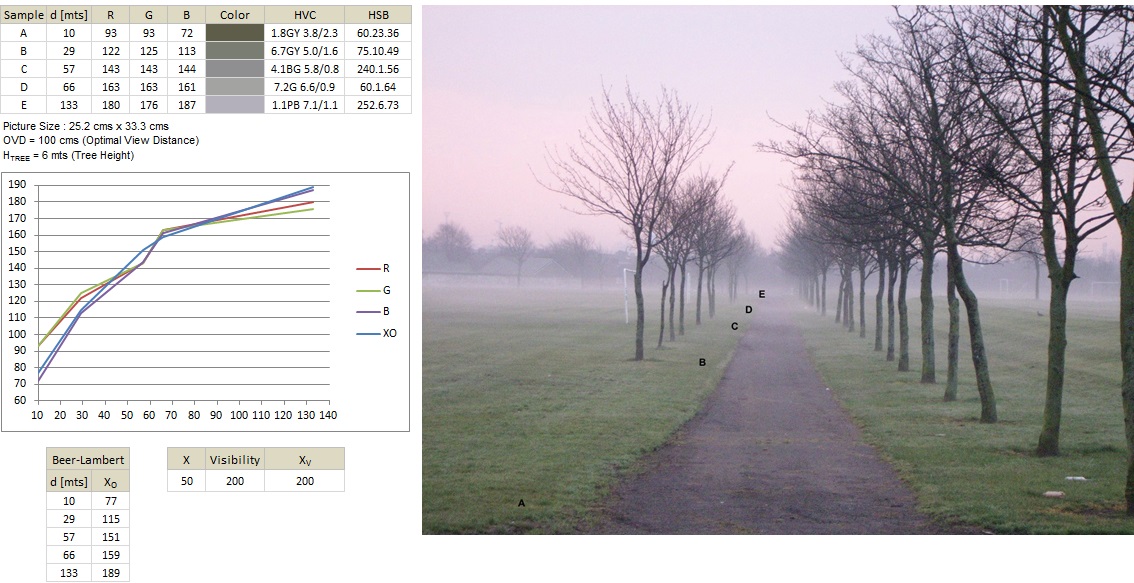 Not the answer you're looking for? Browse other questions tagged color landscape contrast or ask your own question.

66
How to get the best results for landscape and stars photographs?
9
How to deal with large exposure shifts during time lapse?
3
Can I recover my aurora photographs?
20
Do photographers see ambiguity in the color of the blue/black (gold/white) dress?
5
How can I maintain brightness in a landscape without overexposing the sky?
43
Why don't cameras offer more than 3 colour channels? (Or do they?)
3
Automatic identification of lucky images for landscape photography
2
How do I color correct a scan of a transparency with false colors?
2
Can an RGB channel be shifted to increase color gamut into the violet range?