How do I color correct a scan of a transparency with false colors?

I traveled to the company that took this image originally. It came from a small 2" transparency. There are a handful of them, all of which have green and pink hues. I am hoping to fix the colors. 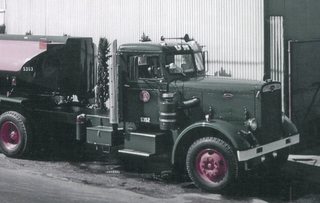 The original subject was blue and orange, which can be seen in a framed print. 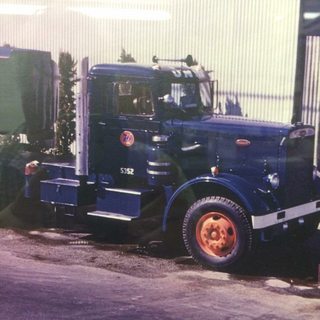 Does anyone have any suggestions about how to color correct this image?

Thanks for comments everyone. Additional info to address questions raised in comments: The two images I post come from a common negative. The blue and white version is a large framed print, owned by the company that took the photo in 1957. While I was at the company that took this image, looking at their archives, I stumbled across small transparencies of the same image, which had turned pink. The version I seek to fix, is a scan of either a transparency or a print-I don't know, it comes from a third party source who traded images with the original company.

I am certain this color change effect was not intentional. To show you, here is another example from the same archives, one is a small slide showing close to the true color, and a the second image is clearly a slide/transparency which has shifted pink. Note that all of these were taken in the 1950s. 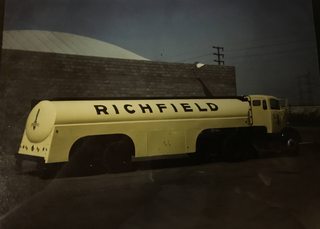 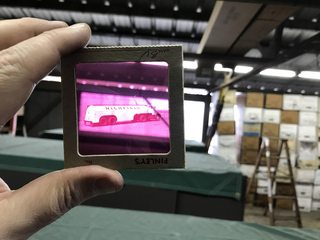 Thank you everyone. I may have to go back to Commerce and see if I can sort through decades of negatives to try to find the original negative, (though I don't know if it has aged, or the transparencies did) OR, possibly talk them into letting me take the framed photo off the wall (the print with good colors), scan it, and have it reframed.

The problem here goes beyond a color shift. There just isn't any useful color information in left image

The original color film had cyan, magenta, and yellow dyes. It appears that the cyan and yellow have almost entirely faded, leaving just the magenta — the pink hue.

I'm guessing that the first sample scan has had green adjusted to be more gray as an attempt to neutralize the shift (making it look very much like an intentional effect.) But maybe it's just like that.

If you crank the saturation up like crazy you can see: 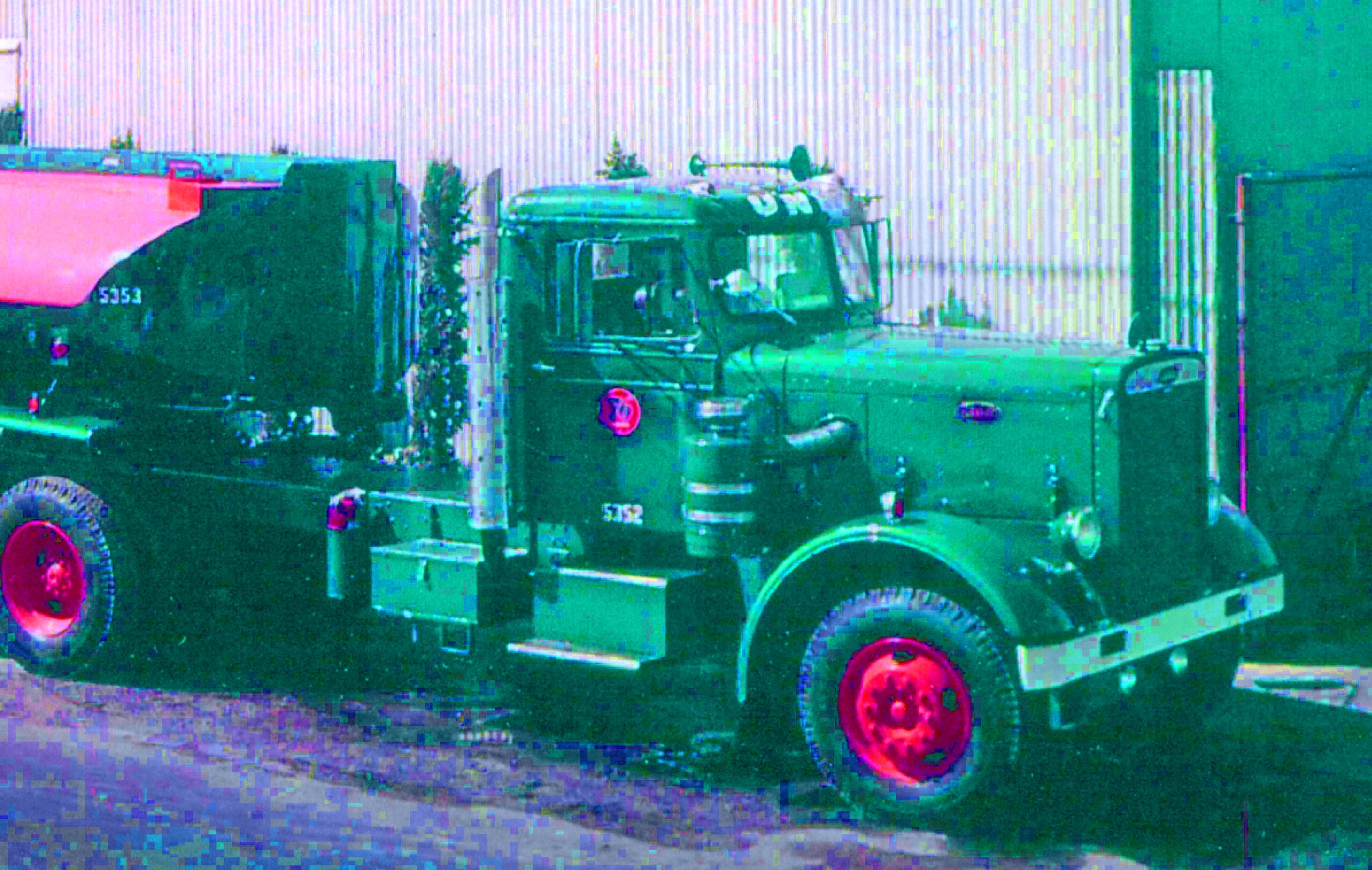 But the point is: there's no useful, real color information in this file. Crucially, note that in the reference, the truck exterior, truck interior, shrub behind, and building to the right all have different hues. That has been lost.

With lesser amounts of fading, one can correct easily with the Color Balance tool in Gimp (or other software like Photoshop). But here, there's not not enough distinct information for that to work. It just ends up re-casting the mostly-gray overall image.

I don't think there are any fixes to this image file, really. That leaves these options:

Not the answer you're looking for? Browse other questions tagged film color restoration or ask your own question.

6
How can I avoid or correct the "inverse Ageratum effect" in digital photography?
7
Is this blue tint because of the film or the process?
2
Horrible quality of prints developed from film
1
Can anyone reproduce the white/gold vs. blue/black dress's binary perception effect with a totally different subject?
5
What can be done about sloppy cut negatives?
1
What's the secret to this pastel, beautifully blurred photo?
10
Why are the color spaces we have access to incomplete?
2
How to correct colors when scanning bleached Polaroids?
3
Why is the color mask of this 135 film dark blue-green?
6
What's the point of scanning family photos at a higher resolution for later enlargement other than restoration?