I have a Sony a57. What are the best suitable lenses for Street Photography compatible with this camera.

It all depend on your shooting style. So technically there is not one best lens option for any type of photography.

So the following suggestions will be based on my preferences. I would prefer a lens with a equivalent on about 50mm which is what is called the standard focal length, and since a57 is a crop censor camera (with 1.5x crop factor), I would suggest a 35mm lens, which is equivalent to 52.5mm on a 35mm full frame camera.

Note that this would be a Prime lens, which mean a lens without any zoom, which I would prefer because of size to be a little bit more discrete, which is kinda preferred in street photography.

So the Sony DT 35mm F1.8 SAM is a lens i would suggest you looking into.

The classic street photographer uses a prime lens for street shooting. Generally, the most popular lens is the equivalent of a 35mm in full frame or approximately 24mm for cropped sensor (producing a 36mm equivalent), but this is not a rule, it is just what purists believe is the best alternative.

Personally, I have no problem with a zoom. I personally prefer something in the range of either 24 or 28 on the short end to 70 or 100 on the long end (I know of some shooters who will even use a 70-200 2.8 to isolate subjects). I prefer a zoom with a 2.8 constant for those moments when I want to open the lens up for the subject I am shooting. I have no problem in the right situation to ask a subject for their picture and they will actually pose or I will ask them to pose, moving them around a bit for lighting purposes.

The best lens depends upon your shooting style. Do not get hung up with elitists who believe that all street photography must be captured with a fixed prime on a Leica or Leica style body (although something can be said for small cameras which are not as intimidating to the average subject).

Also, do not be afraid to look like a tourist in places where there is a lot of tourism. I live in a destination resort area and people who live and visit there are use to other people taking photos.

Best, as others have noted, varies with the user.

For an APSC camera I very strongly recommend a zoom with a minimum focal length of around 17 or 18mm and a top end of as much as you can afford at the quality level desired. ie 17-55mm is an excellent start, but 17-100+mm will not go astray, and I find an 18-250mm very useful. Details, reasons and examples below ...

Street photography usually does not emphasise utter lens performance or adherence to rules - contents and inter-relationships usually predominate over absolute crispness of focus, spot on exposure of rule-matching framing. So while having the best that Carl-Zeiss can make would be very nice, a kit lens may not be too bad a start.
Starting with your 17-55mm kit lens, equivalent to a full frame 26 - 83 mm will probably be a good initial choice.

I mostly use an 18-250mm f/3.5-6.3 on an APSC body = full frame 27mm- 375mm. The top end gets used less often than the 18mm, and most photos would be in the 18-100 (27-150 equivalent) range. Very few people will recommend a 17 or 18mm lens and it is often cited for producing purposeful distortion, but I find it superb for super closeup 'fly on the wall' photos and for getting a good width of scene in restricted situations and when you need to act rapidly. With experience you can 'shoot from the hip' while walking through a crowd of people, or raise the camera slightly, and stand right in amongst a group of people - as invisible or visible as you wish to be. Sure - people see a tourist with a biggish camera, but you are not obviously an "in the face" photographer. Too too close and you get perspective distortion. Back off a small way and it becomes acceptable.

EXAMPLES of why a 17mm minimum focal length (with an APSC sensor) is desirable:

Note that the two portrait type shots below would not be considered "street photography" by most but help make the point. See link for many more examples.

The examples in this album were all taken at 18mm focal length using an APSC camera - in most cases a Sony A77 or A700. In many but not all cases I have added rectangles which show what you would see if a 28mm lens had been used from the same camera position. In the examples where I have not included a 28mm crop rectangle you will have a good idea of the effect after having seen numerous other pictures with the rectangles included.

Here is an example set of 4 photos, all taken at 18mm and with 28mm crop rectangles shown. (18mm and 28mm on an APSC corresponds to about 27mm and 42mm on a full frame 35mm sensor.) A a prime 35mm lens would cover less area again than the 28mm and a 50mm even less again.

In the alleyway shot, top right, from the position used, a 28mm lens would have vastly reduced the framing options. With even a 17-55mm zoom you could choose from the framing shown down to an area about half the side length (1/4 the area) of the red rectangles.

In the photo of the man on the tricycle, from the position used, the difference between 18mm and 28mm is vast. The 28mm cropping is too tight for even a shot focusing exclusively on the tricycle.

In some cases "foot zoom" will allow you to increase image coverage but this is often not possible when spontaneity or rapid action are required. In the group portrait at top left, you'd need much longer arms :-). 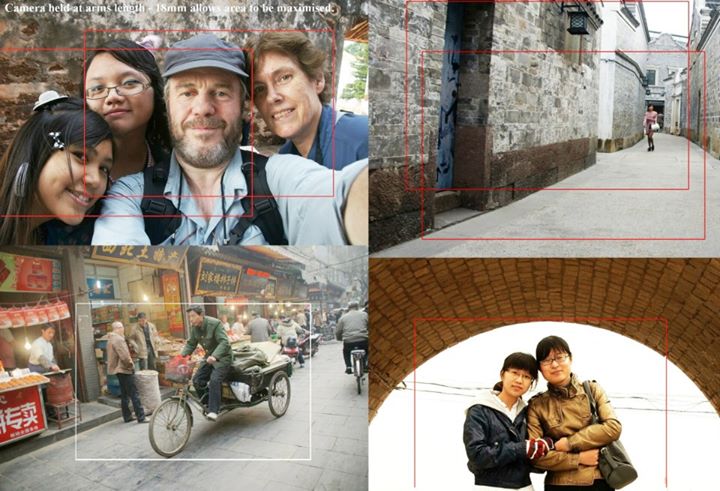 See also my different but relevant answer to Any reason to buy stock lens for Sony Alpha if I already have good Minolta Maxxum lenses?

How long have you owned this camera?

The best lens to start off would be the 18-55 kit lens which comes along with the camera. For street photography during daylight, this is a good option without spending any more on equipment.

Features such as "auto portrait framing" etc. can also be tried out using the kit lens during street photography.

For candid street photography, a longer focal length 75-300 etc. would be helpful.

If you are just starting off, worrying about the equipment in the beginning would only limit your creativity.

Not the answer you're looking for? Browse other questions tagged lens equipment-recommendation sony street-photography or ask your own question.

7
Any reason to buy stock lens for Sony Alpha if I already have good Minolta Maxxum lenses?

8
What specifics does a street style/detailed photography camera + lens need to have?
7
Any reason to buy stock lens for Sony Alpha if I already have good Minolta Maxxum lenses?
3
What gear for Sony off-camera flash sync with TTL?
2
Do I need a light stand mount specific for Sony shoe?
14
Would the 40mm pancake or 50mm prime be better for street photography with a Canon APS-C camera?
11
What is a good focal length for street photography?
1
What are some tips for using a macro lens for non-macro photography?
0
Underwater Housing for Sony A7s for surfing photography?