What specifics does a street style/detailed photography camera + lens need to have?

I have about 1000£ to spend on a new camera and lens. I will be doing Street style photography and portraits. What does a camera for this use case to have?

What lens / how many mm is best for portraits and what lens is best for full body and blurry back ground?

The first choice is what what type of camera you want. It used to be that a DSLR was your only option for the flexibility of interchangeable lenses. That is no longer the case, as there is a growing crop of "mirrorless" cameras with these features.

We've got a number of questions covering this from several different angles, and I've chosen a number of them which I think make good starting reading:

This is particularly relevant because the more-compact and more discreet mirrorless cameras are often especially appealing for street photography.

You might also want to give a bit of consideration to cameras like the Canon G1 X or Sony DSC RX100, which have a larger sensor and a decent, non-interchangeable lens. These may fit your needs at considerably less than your price point.

I don't think we have a really good question about narrowing down brands of mirrorless cameras, but if you've decided that you really do want a DSLR — and that's not a bad choice! — we have some great answers comparing brands in a relatively unbiased, non-partisan way:

because the "next tier" brands offer some unique advantages that might fit your needs and style.

And related to all that, if you do choose a camera with interchangeable lenses, it's valuable to center your decision around that, as different systems will give you different options. See:

for some great stuff on that. Traditionally for street photography, a 35mm equivalent focal length (around 24mm on a non-full-frame DSLR) is common, or else 50mm equivalent. If you're really focusing on portraits, you might want something a little longer, but that depends on your style. From your description of how you're planning to work, I'd strongly consider that you think about finding one prime lens that you really love — don't worry about covering all the options. (Reading: A great blog post from photographer Kirk Tuck on that topic, and one from Mike Johnston on prime lenses and also a few from Mike's site on the less-extreme idea of a two-lens kit.)

I know that's a lot to read and not nearly as simple as a "buy this; it's in your price range" recommendation (if you really want that, I'll point you back to Mike Johnston and his tongue-in-cheek-but serious Letter to George), but I think the links above will be really helpful and make you better equipped to make your decision.

What to buy is an immensely personal issue. I don't actually have much hope that you'll buy the camera "Ferrari equivalent" that I'm suggesting - but knowing what is available will give you better perspective.

Added: You could buy what looks to be a pristine condition used
D700 and a Nikkor f/1.8 50mm on ebay UK for GBP1200 all up - see towards end.
That exceeds your budget by GBP 200, and carries the risk of a used camera, AND buys you something akin to a Ferrari in automotive terms.

The D700 has been the second to top low noise low light 35mm camera in the world for about 4 years (the newer larger twice as costly D3s was about a stop better). Even now the very top cameras are just starting to exceed its capabilities. By the time you are finished you will have bought several more lenses - but a single lens will do what you want to start, and adding a cheap kit zoom will add some flexibility.

Why a 50mm lens to start with? See "lens choice" below.

What I'd buy on your budget will draw derisive comments from some. But it IS what I'd buy in your position if at all possible. The most camera per $ yet made if you can get it at that price.

I'd buy a Nikon D700 - probably a used one to meet that budget - but prices are falling with the D800's arrival. "Only" [tm] 12 megapixels. Have a look at these D700 samples and see if that 12 mp is going to bother you. Look at the results in the lowest of lighting conditions.

Usually the lens is a vital component of a system. And it is here too. BUT any sensible lens that meets you requirements with respect to focal length range will work "well enough" on a D700 to make you ecstatic both initially and for a while".

These by FDPReview - one of the very top camera information websites available - according to me (whatever) and a very large number of other people. D700 review.

Many many other reviews .

The 550d is sure to be a fine camera in its class.
It has features that the D700 lacks - such as video capability. But there is ! no comparison to the capabilities of a D700 if you are interested in taking real world photos.

The D700 is amongst the top handful of 35mm low light photo taking systems ever made.
You will never regret owning one.

Personal.
I mentioned 50mm as a starting point because 50mm was for many decades THE standard full frame lens if you had a fixed lens "rangefinder" camera. The lens / film size combination approximates the human eye in perspective. Some photographers will happily take eg a D700 and a 50 mm f/1.8 or "faster" lens and happily go out for a day's street photography. I find it too limiting but it's great when you want large aperture and shallow depth of field.

You can buy a 50 mm f/1.8 Nikkor used in very good condition on ebay UK for GBP65 - and sometimes probably for rather less.

A manufacturer's 50mm prime lens is almost always the lowest cost lens they sell BUT because it is easy to make and has been being made in one form or other for decades (literally) the value for money is superb and the performance is as good as that of zooms costing many times the price. ie quality per $ a Rokkor 50mm is hard to beat and it is a very usable lens in a street and interview situation. Yes, you WILL need "foot zoom" to use it in every situation. But it will do most of what you most want to do.

Maybe you want to buy a very cheap used DSLR first to get a feel for what can be done. Even a many years old one with say about 5 or 6 megapixels and APSC sensor will produce results that are amazing compared to any "point & shoot". Megapixels are nice BUT other things matter more in most cases.

~ The wonderful world of 50mm prime lenses - that's what the page is called ! :-).
An excellent "why a beginner wants to use a 50mm prime lens" page.

~ Rediscovering the 50mm prime lens - this is an advertisng page for a course but summarises the idea.

50mm, f/1.8, 1/45s no flash, tungsten-fluro mix etc as per next image. Object here is to demonstrate field of view and grouping with 50mm lens on APSC and effect on facial perspectives etc. This is handheld at 800 ISO - obviously with this camera in this light a 'quality' photo would need a tripod or additional (mood spoiling) lighting. 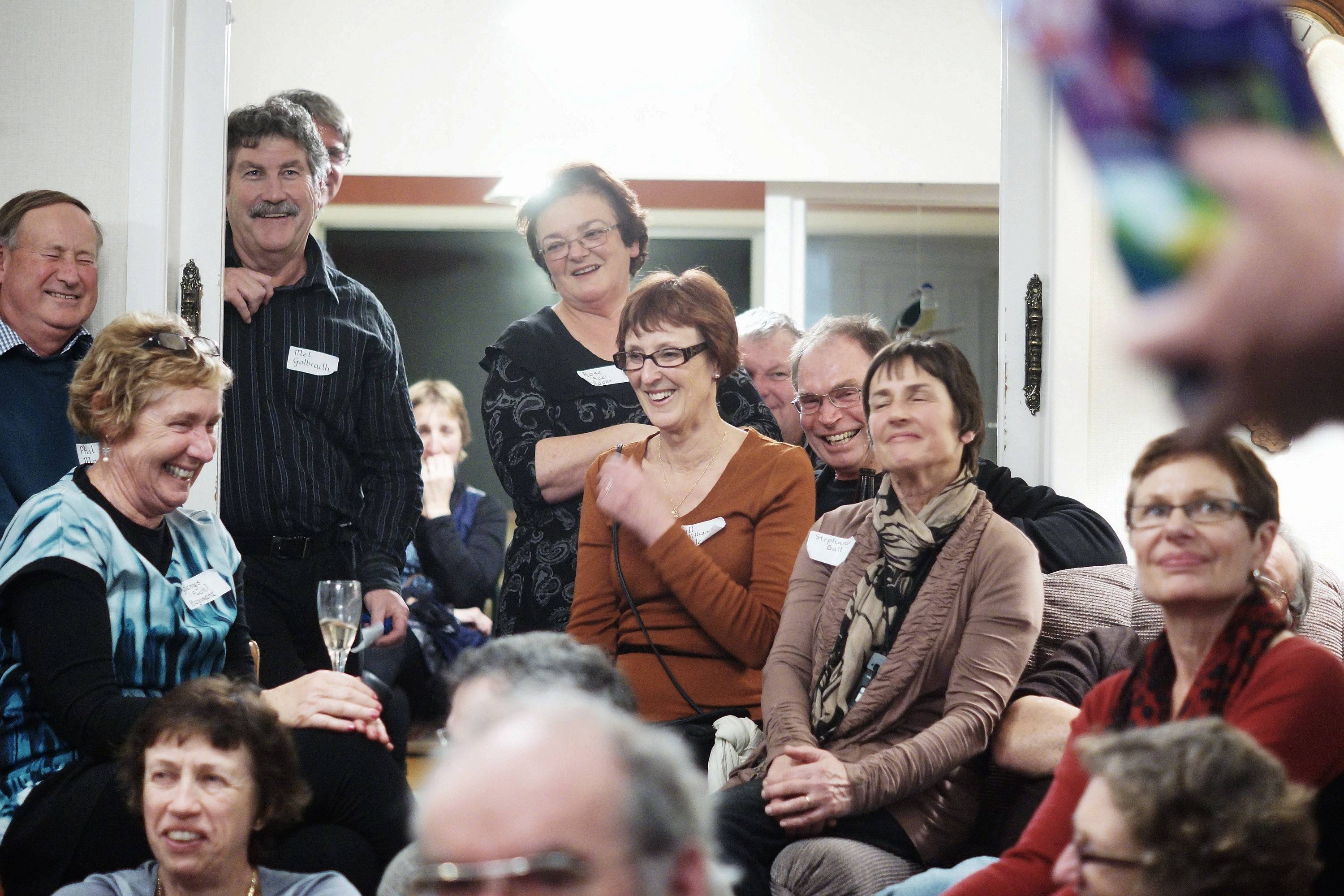 A number of photo sample accompany his rhapsodising. He says -

~ Prime lenses - and why you really need to get your paws on one. He says:

Image: 50mm f/1.8 lens. 1/45s.
APSC 1.5:1 crop sensor so 75mm equivalent. Tungsten/fluro lighting mix, no flash. Manual white balance.
Note depth of field from large aperture.
Main aim here is to demonstrate acceptability or not, as the user may judge, for portraiture at this sort of range 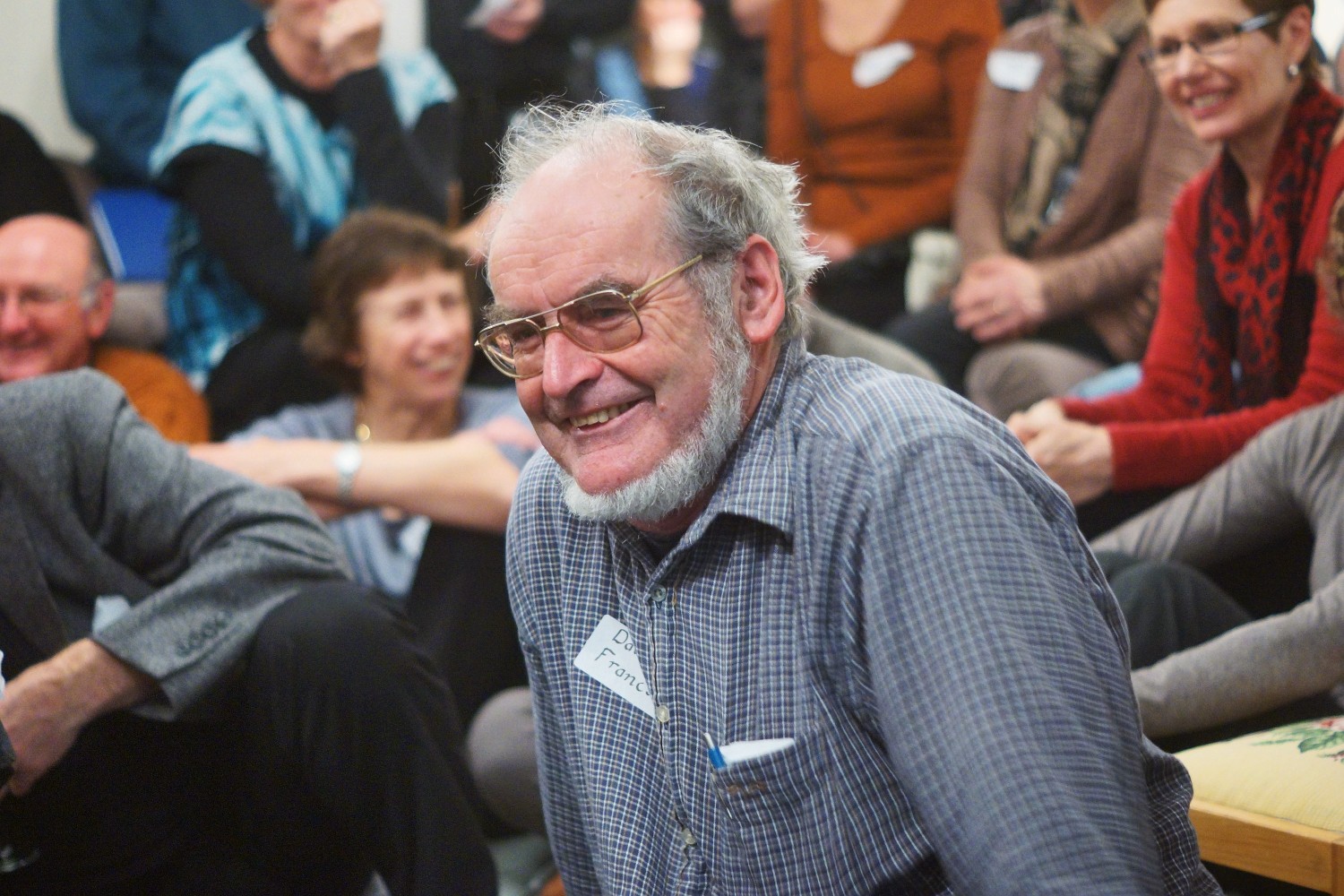 Response to depth of field query:

And think a canon 600d might be my answer.. the lens you get with it is a 18-135IS. Would you say that this lens can be used to street style (blurry background?)

Small depth of field (leading to "blur backgrounds") is enhanced with large aperture (small f number), longer focal length and closeness to subject compared to background. You will be able to achieve this effect to a reasonable extent with the 18-135 kit lens but a lens with larger maximum aperture will do this in a wider range of circumstances.

As can be seen below, even at f/8, shallow depth of field can be achieved if other conditions are met.

The photo below was taken with a fixed f/8 mirror lens, 500mm focal length on an APSC camera (750mm equivalent on full frame) with the bird at about minimum focusing distance of about 5 metres. Even at f/8 the long focal length and short distance (relatively) to subject result in a very shallow depth of field - probably under 2 inches in this photo.

The "donut" shapes in the out of focus area are caused by the "mirror" lens optics. The depth of field would be the same for a conventional lens of the same focal length. 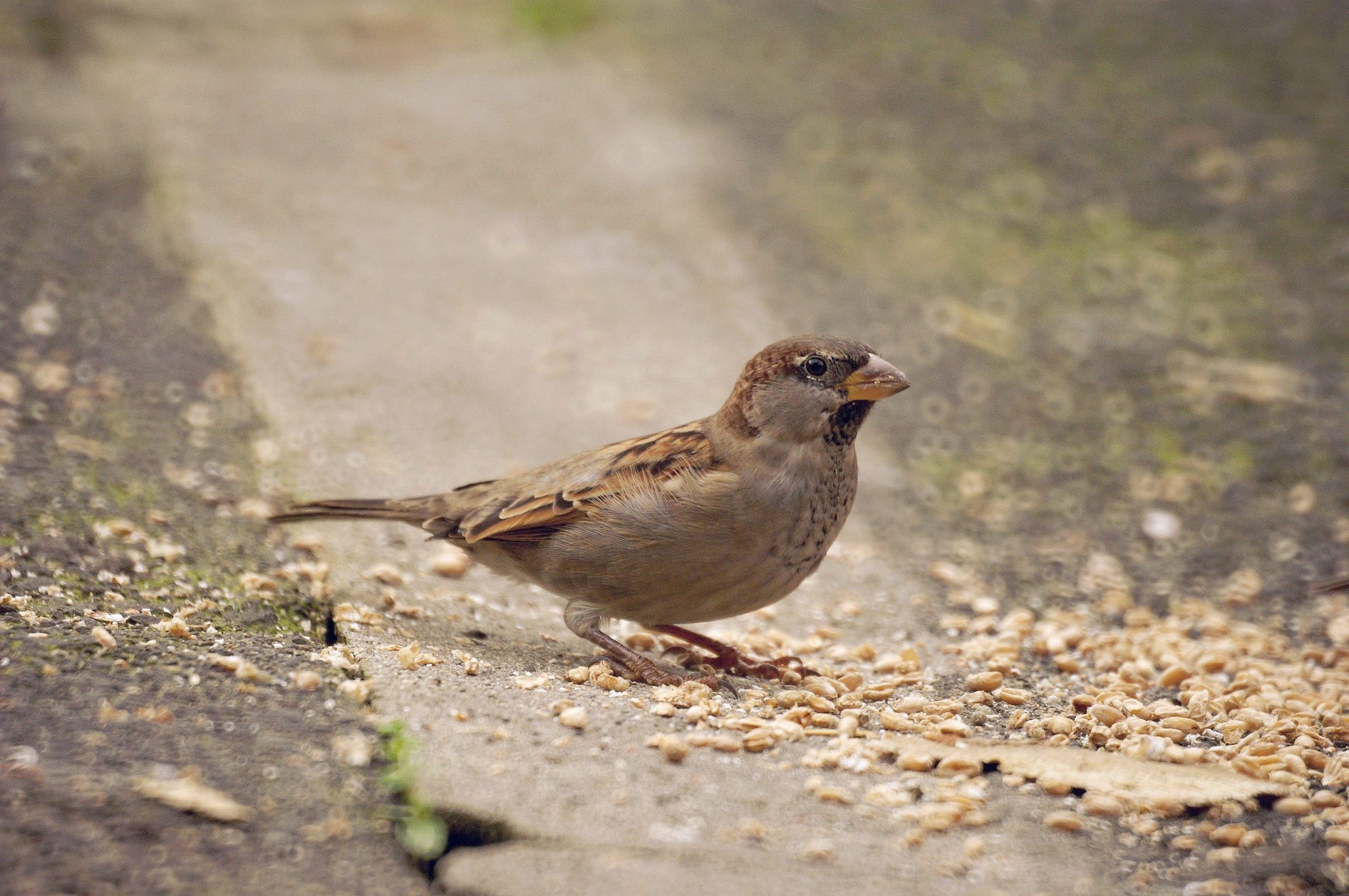 I'd go for something like the Canon 550D with the kit lens (for wide shots), plus a macro lens, and normal lens.

The 550D is lightweight and easy to use. I've picked Canon based on their fine 60mm macro lens, which doesn't have an equal at the price on any other system. Macro means it focusses really close, so you can shoot objects as small as 2cm. It will also take razor sharp portraits.

The 50mm lens is included for low light work, subject isolation (shots with a blurry background) and because it's exceptional value for the price.

The difference between Nikon and Canon is mainly ergonomics. I'd recommend you to stop buy your local photo / electronics shop and try to use both brands. I have friends that swear to Nikon, but I feel the same for Canon, due to the ergonomics. It might also be an idea to get the same brand as people you know. That way you can borrow lenses and other equipment of each other.

It's always an option to rent a camera + a few lenses before you buy, to figure out what you prefer.

You might want to try lenses around 24mm-50mm (and probably primes) with a cropped camera with your budget.

Not the answer you're looking for? Browse other questions tagged lens equipment-recommendation camera-recommendation street-photography or ask your own question.

83
How much do lens lineups vary across DSLR platforms?
69
Is there any significant difference between Nikon and Canon?
32
How do Micro 4/3s cameras compare with DSLR cameras?
33
What do Pentax and Sigma DSLRs offer that differs from Canon and Nikon?
11
Are mirror-less cameras good enough to buy instead of a DSLR for home/amateur use?
18
Is gallery quality possible with a mirrorless camera?

2
What are the best lens options for Street photography for Sony alpha mount
14
Would the 40mm pancake or 50mm prime be better for street photography with a Canon APS-C camera?
0
What lens will get the whole body in the picture for street fashion photography?
2
Is the Canon EF-S 24mm 2.8 Pancake Lens good for full body portraits?
1
What are some tips for using a macro lens for non-macro photography?
0
How do I choose a prime lens to get blurred backgrounds for full-body street photography shots?