I’m really new to shooting film and made a really dumb mistake. I tried to load my film into my camera but must have done it wrong because the counter stopped at 12 even though the roll had 36 exposures.

I then opened the back of my camera in my dark bathroom to try and unload and reload it but it won’t re-roll past a certain point.

Is it possible to save this roll of film? I know that a bunch of it is exposed so that’ll be unusable, but is there anyway to fix this?! 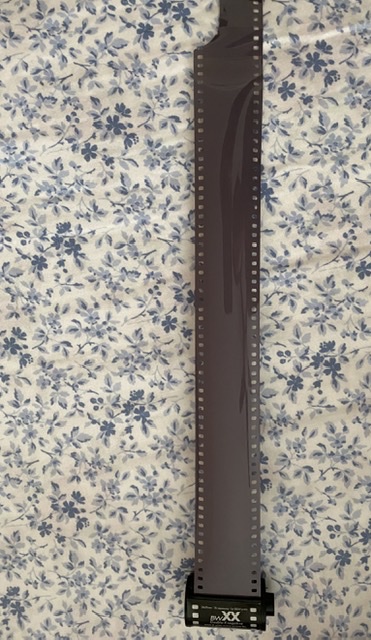 It appears ( possibly, it is hard to tell ) to me that the leader is no longer smooth and has been hand cut.

Sometimes I have film loaded in my camera of an ASA that is not right for the light that I find myself wanting to photograph in, so I rewind it back just enough to leave the leader out of the cassette.

I may want to develop what I have shot on the roll before I shoot the rest of the roll, so in the darkroom I pull out enough to get what I shot and cut it off for development. I then cut the curve in the leader, ( Create a new leader on the film remaining in the cassette ) to match the factory leader so I can load the remainder in the camera. This means the number of shots on the roll is no longer what the factory label says, so I use tape and a marker to indicate approximately how many shots are in the cassette.

The only film that will be savable will be any that is still in the cassette, if there is any. You will need to go into a darkroom, ( Completely dark, not a closet with a sliver of light coming from under the door. BLACK, complete darkness ) and see if you can pull any film out of the cassette. If you can, then rewind it back in and you can shoot what is left. If you can't pull any out, then there is no more in the cassette.

Not the answer you're looking for? Browse other questions tagged film exposure or ask your own question.

19
How do I unwind a roll of film?
2
Sheet film development Vs Roll film development
8
How to tell if a roll of film has been exposed?
1
Does film (get a chance to) degrade before sale?
3
Poorly scanned or poorly shot film roll?
1
I accidentially exposed a bulk film roll from a bulk film loader. Are there chances of recovering parts of that bulk film?
2
Did I ruin my film when I opened my Canon Sure-shot telemax film camera?
2
Did my Nikon FM2n let me advance through the end of the roll of film?