I recently did some tests with the Pentax Astrotracer1 system. To do so, I shot Orion (which was in a SSW direction and around 30° above the horizon on that night) and its surroundings at 180s exposure with a 16mm f/2.0 and a zoom lens at 12mm f/4.0.

The results were surprising: 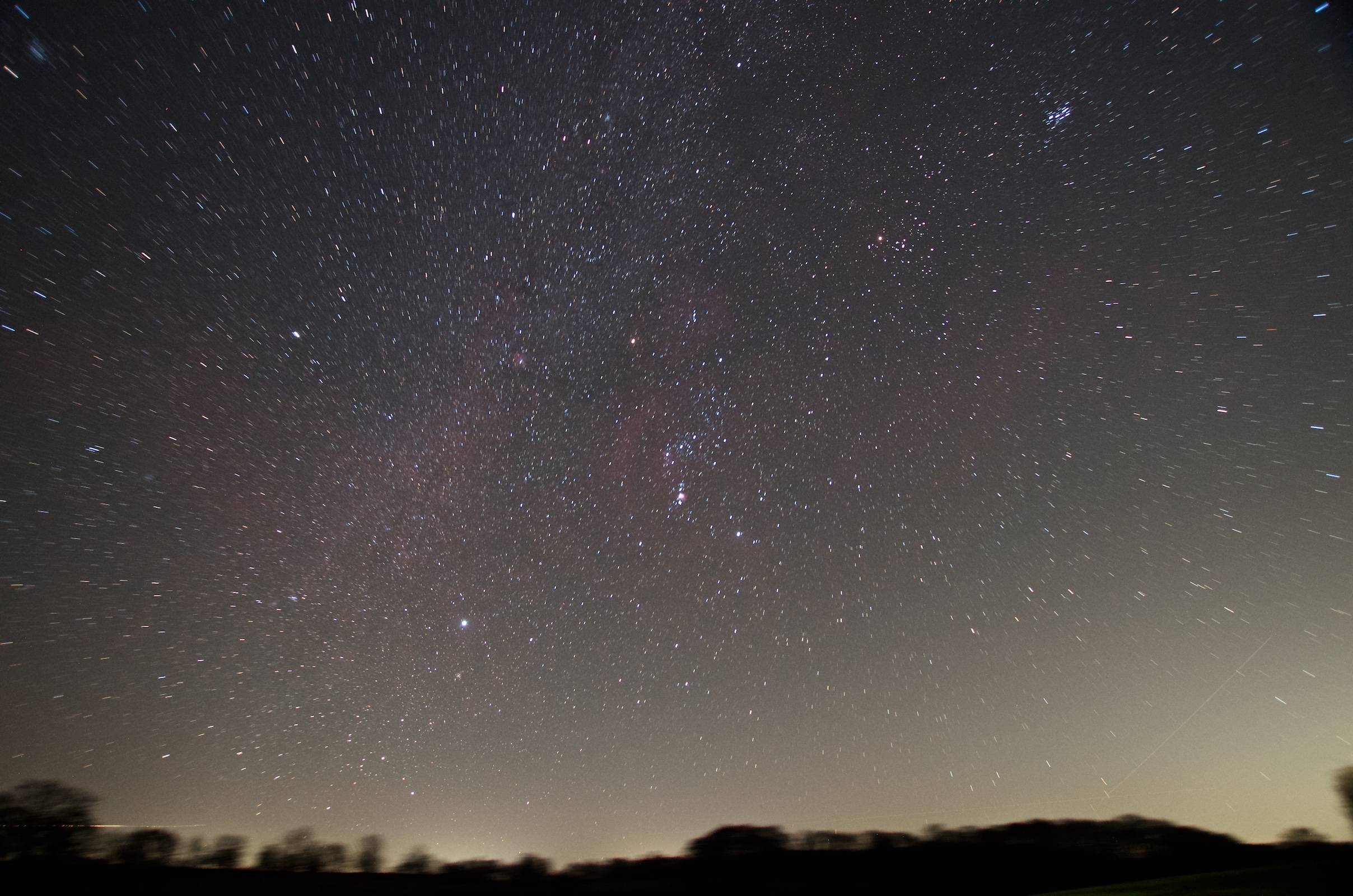 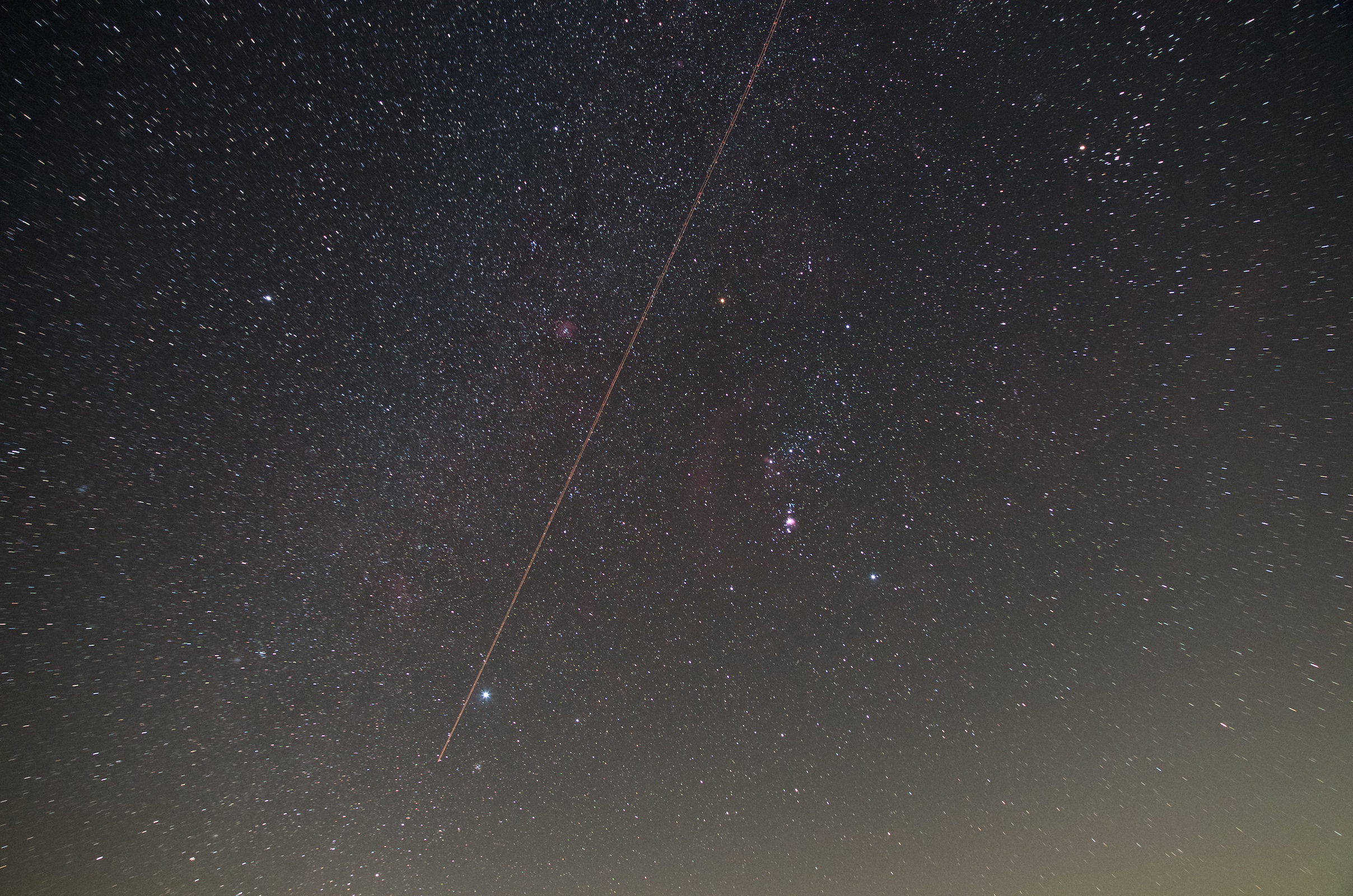 Both lenses I used during testing showed stars being drawn out to linear streaks on the edges of the image, seeming to radiate almost (but not exactly) from the image center. In the bottom right corner of the first image, some star trails seem to radiate from a different point.

I wonder if that's a lens error showing up, since the constellation of Orion itself was tracked fairly well. If the tracking system assumed a wrong position or sky direction, I would have expected all stars across the field to show similar trails. Also, from using longer lenses, I know that the Astrotracer system itself works well on my camera.

Can anyone help me identify the reason for those star trails?

1 For those unfamiliar with it: The system uses the movable sensor in Pentax cameras to track the apparent motion of stars during long exposures. The control input for it comes from a combined three-axis GPS and magnetic compass unit, so that the camera can calculate the required motion from its position on the earth, the time and the viewing direction and elevation.

If you have streaks while using a tracker, your first assumption should be an alignment error. A close second would be to verify that you don't have a rate error (i.e., you're tracking sidereal while shooting stars, not lunar or solar rates). 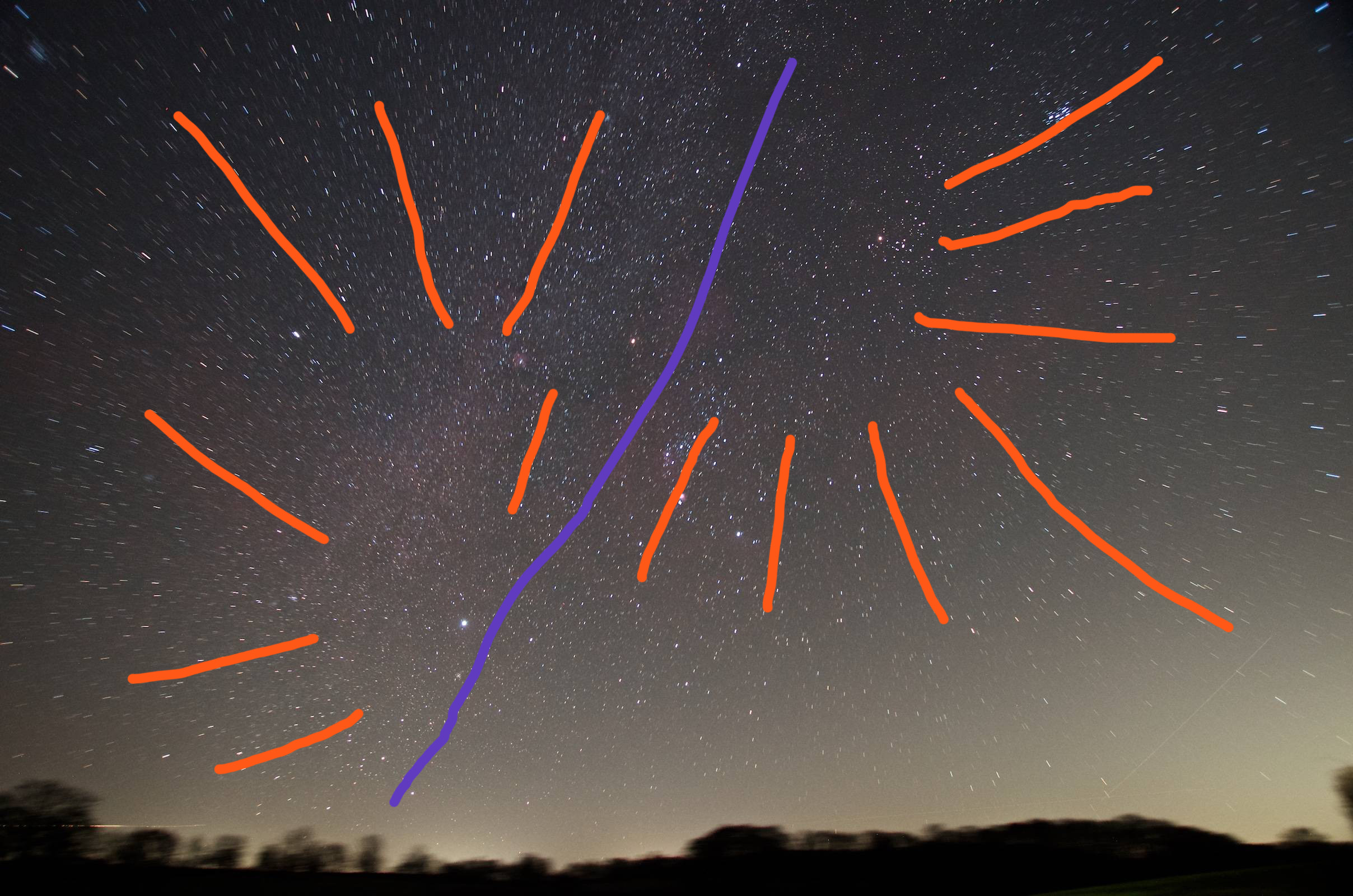 If a conventional tracker is not correctly polar aligned, or if it has some errors in its precise GPS location and attitude/orientation, then over an exposure such as your 3-minute exposure, you will get streaks.

The magnitude of the streaks depends on how much alignment error, and where in the sky you point the camera. If you are only one or two degrees off the North Celestial Pole (NCP), and you're also aimed north towards Polaris, you probably won't see streaks over a 3 minute exposure. But aimed toward the celestial equator, where stars appear to be moving fastest, you'll notice streaks.

One major factor in astrotracer accuracy was the angle and direction the cameras pointed. We found that the astrotracer performed the best when pointed at Polaris with decreasing accuracy the closer the camera came to being pointed due East or due West. We also found that angling the camera upward reduced accuracy the closer it came to a 45-degree pitch with accuracy at zero and 90 degrees being basically the same. So a 45-degree camera pitch to the East or West will likely deliver the poorest results where as a zero- or 90-degree pitch to either the North, South, or Zenith will likely deliver the best results.

Based on this, and because you're aiming near the celestial equator (Orion straddles the celestial equator), you're definitely asking the Astrotracer to work near its limits. From what I've read, perhaps you could try to improve your calibration procedure (such as be slower and more deliberate when rolling the camera to calibrate the compass sensors and/or GPS)?

This is kind of a parallax problem, and you cannot avoid it with a lens that tries to project a flat rectilinear image from a spherical view as you have with space. Maybe a fisheye lens help, but I am not sure of this.

When you point a wide angle lens towards east or west and then simulate the earth's rotation by moving it upward or downward, what happens then with the sides? They will move similarly up and down. But since the stars in those polar regions (i.e. N and S) do not move the same distance as those near the ecliptic (i.e. W or E), you'll get the streaks when you try to follow the stars there. In other words, the stars move at different speeds over your wide field of view, and you cannot follow them all at the same rotation speed of your camera.

To get the desired results with your wide angle lens, try taking multiple short-timed shots and then stacking them with software specially made for this purpose.

Not the answer you're looking for? Browse other questions tagged troubleshooting astrophotography pentax ultra-wide or ask your own question.

2
In 2019, do any OSS/IBIS implementations offer some degree of subject tracking?