Why do photos look best without any sharpening?

Maybe it's a subjective question, but most of the time my photos look best when I leave the Sharpening slider of Lightroom in a value close or equal to zero.

Which are the benefits of digital sharpening?

It would be awesome to see some examples where added sharpening has made a significant, positive difference in the final photo.

A lot of that depends on the camera, the exposure, the subject matter, and the size of the image.

Most modern digital cameras deliberately blur the image somewhat when you take a picture. There is an anti-aliasing filter over the sensor to prevent moiré when the subject contains small, regular details. While the AA filter does solve one problem, it introduces another. (Which is why the high-end medium format digital cameras/backs -- and Leica, in the M-series -- choose to forgo the AA filter.) Some AA filters are more aggressive than others, resulting in softer images -- sometimes to the point where the softness is visible when the image is sized to fit a monitor. That's not nearly as big a problem now as it was in the sub-10MP days.

The exposure can make a difference as well. If your image contains a lot of noise (relatively speaking) then the noise will be exaggerated by the sharpening -- it's just "detail" as far as the sharpening algorithm is concerned. In a very noisy image, you can run a noise-reduction filter/routine over the image to make it look pristine, then the sharpening filter just comes along and recovers all of that valuable noise detail for you.

Some subjects benefit a lot more from sharpening than others, and that can be true both across different images and within a single image. For instance, you probably want people's hair, eyes and so on to be pretty darned sharp-looking, but unless you are documenting dermatological conditions, you probably don't want their skin to be anywhere near as sharp. You can have the most perfect model with the smoothest porcelain skin and impeccable makeup in front of the camera, and the sharpening filter will give you a picture of someone who took a face full of birdshot (at a distance) in a tragic hunting accident. (Everybody's skin is textured and has hair in the most surprising places. If you do a lot of portraiture, you'll find yourself -- or your lab -- spending a lot of time fixing skin problems in the "keepers".) On the other hand, if you are trying to recreate Ansel Adams' Aspens, New Mexico, you'll want every twig, every detail in the bark, and every vein in the leaves to stand out. Clearly, these are two different classes of images with two different sharpening requirements.

Finally, there's the image size to consider. If you're looking at an image on-screen (and that's where it's going to live), then the kind of sharpening that would be appropriate for a large print (with a lot of local microcontrast) is going to scale down as noise, especially with the simplistic on-the-fly scaling that occurs when a large, multi-megapixel image is forced to be displayed at a much smaller size. On the other hand, if you sharpen according to what looks good on a 1920x1080 monitor at 100% and use that to make a 13x19" print, you'll probably be very disappointed in the result (even if the same file looked really nice when you printed a 4x6). The image will look like an enlargement of something smaller rather than something that was meant to be big all along, and you won't be able to quite put your finger on why.

While there are no real universals in sharpening, it's probably best to restrict the initial sharpening to be just enough to overcome what the AA filter did when you took the picture. Save the final sharpening for the end product, and make it appropriate to the output medium, whether that's a small JPEG on a web page or a huge gallery print. Take some time to learn what works for screen and for prints at various sizes, and try to understand that if you are working for print, you need to take what's on your monitor with a grain of salt -- at least until we get really nice 300 pixels-per-inch monitors to work with.

Sharpening of digital images is made necessary by two things that degrade the image:

1) the anti-alias filter, to prevent aliasing it filters out high frequency information, but that degrades the image sharpness.
2) the Bayer matrix, this is a scheme to recover pixel level colours from a 3x3 matrix which also degrades image sharpness.

This degrading of image sharpness is quite significant so it is normal to try to reverse the degradation somewhat by applying sharpening. And herein lies the problem. The precise amount (and manner) of sharpening is a subjective process and when too much is applied the image acquires an artificial look with thin white/black/grey lines or halos around edges.

A good way to see this is to use a tool like QuickMTF to analyse the edge sharpness of a five degree slanted edge.

The first image below shows the edge sharpness of an image with very little sharpening applied. Here the edge blur is 2.57 pixel.

The second image has moderate sharpening applied and the edge blur has decreased to a very respectable value of 1.64 pixel. Now the shape of the curve indicates very little 'ringing' which means there will be no sharpening artifacts visible.

The third image has had excessive sharpening applied which has reduced the edge blur to 1.56 pixel. You will see considerable 'ringing' in the graph indicating the over sharpening. So while the image is sharper there will be visible sharpening artifacts.

How much sharpening you want must be balanced with how much artifacts you are prepared to tolerate and this is your subjective choice. 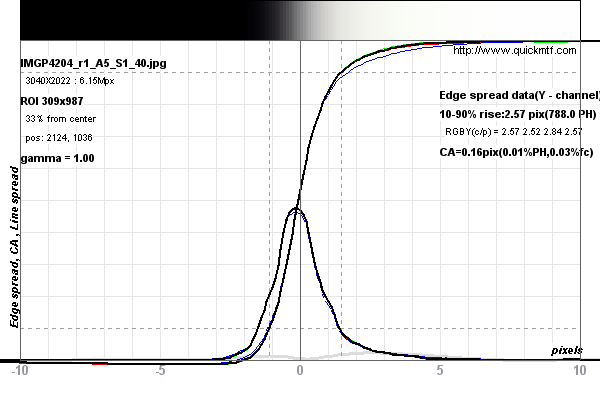 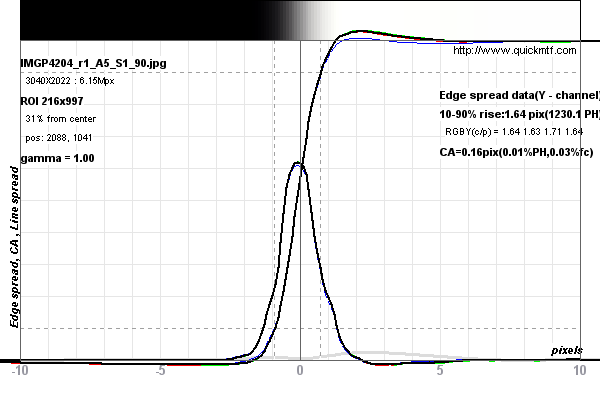 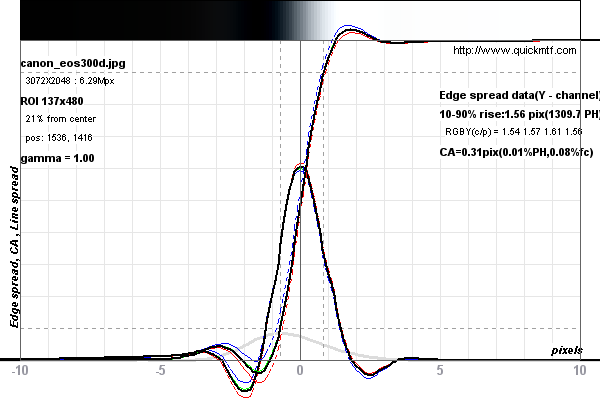 First of all, everyone has their own tastes, and if you are used to unsharpened photos, they will look best. Oversharpening can make a photo look fake, which might be what you are seeing. Also, if you zoom in really close, it creates rainbow effects. However, an appropriate level of sharpening will usually improve the image. The appropriate level depends on what your final goal of the image is. A billboard will be sharpened differently than a photo for the photo of the week competition, for instance.

This is an example I shot:

I think sharpening clearly made an improvement here, and it is not the only case where I am noticing this. I apply sharpening in LR to almost all of my pictures (shot in RAW).

Not the answer you're looking for? Browse other questions tagged digital photo-editing sharpness sharpening or ask your own question.

13
Recommended start point for sharpening RAW Images
1
Why are images with my Nikon D7000 and 70-200mm lens soft?

31
Can anyone recommend a good open-source photo management platforms for power users?
23
Why should my last post-processing step be sharpening?
10
Why do my photos look like they're painted?
1
Is there any different process of sharpening in different genres of photography or not?
3
Why do photos look blurry in Aperture but sharp in Mac OS X Finder?
2
Why it is said that sharpening is always needed in digital pictures?
7
Why the trend of faded vintage photography?
2
What do I need to change to prevent this denim looking grain/noise in my product photos?