Why is my camera drawing labyrinths on my photos?

On the photos where the lens flare is present, my Nikon D7000 is drawing strange labyrinth-looking artifacts. Here's an example.

The first image is a screenshot of a little part of the original photo zoomed 2:1 in Lightroom.

The second image is the same photo with Lightroom's contrast, clarity and sharpening set to the maximum to make the labyrinth pattern more visible. 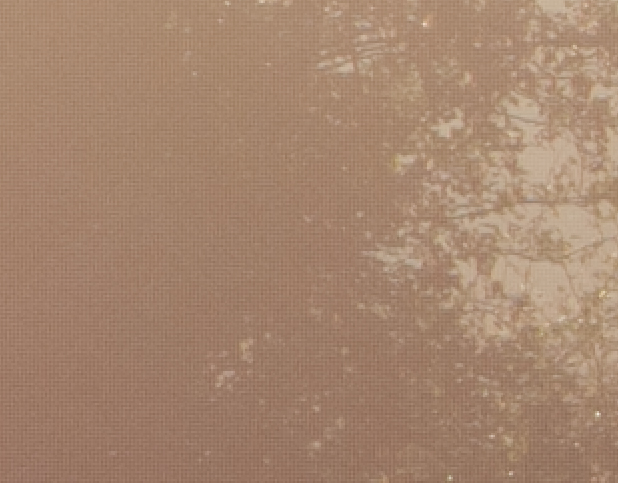 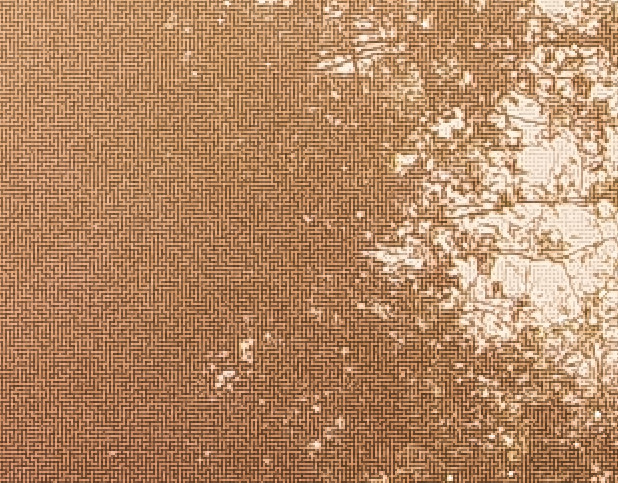 This affects only some of the photos presenting lens flare. Here, for instance, the lens flare is present and light conditions are very close to the first photo, but there is no labyrinth pattern, only usual noise (screenshot of a part of a photo at 1:1 with contrast, clarity and sharpening set to the maximum): 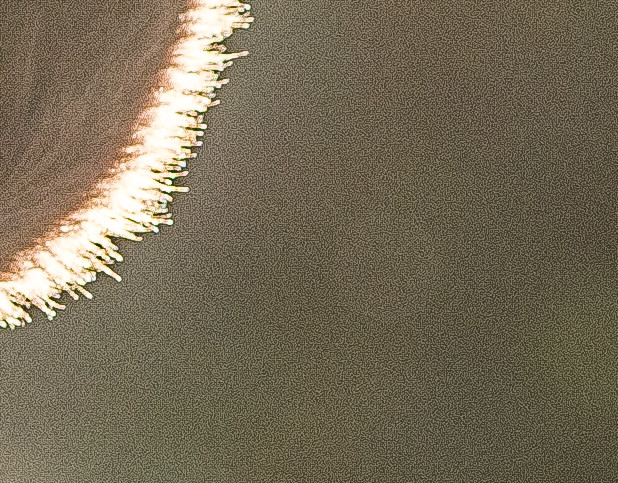 What is that? How do I avoid it?

Anything you are viewing on the screen is not raw data. Raw image data are linear monochrome luminance values and nothing else. Anything that shows more than one color is the result of the application you are using to view the image translating the raw luminance values into gamma corrected light curves and demosaicing applied to create interpolated colors and reducing it to 8-bits to be sent to your 8-bit monitor.

If you view the same raw data using an application that uses different demosaicing and gamma correction algorithms you will see different patterns which may be more or less regular than those you got with whatever application you were using to view them above.

The patterns you see in the first image are also present in the second. They're just not as widespread or as uniform. Look carefully at the transition area between the very light and very dark area near the upper left. They're there. Your first image just has much more area where there are medium tonal values that are all the same hue and are being pushed up (brighter pixels) or down (the darker pixels) by the processing algorithm. 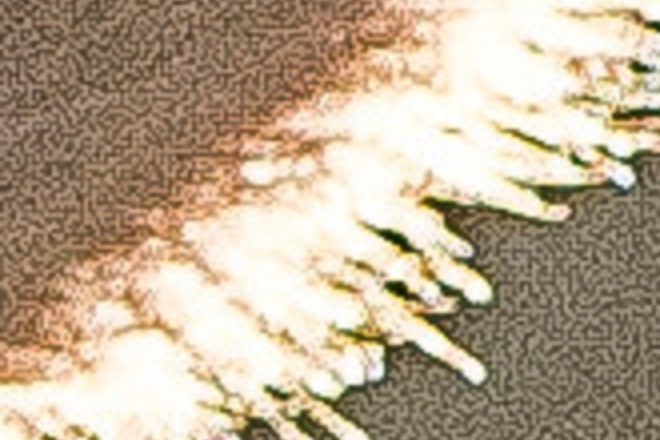 A 4x magnified crop of your second image 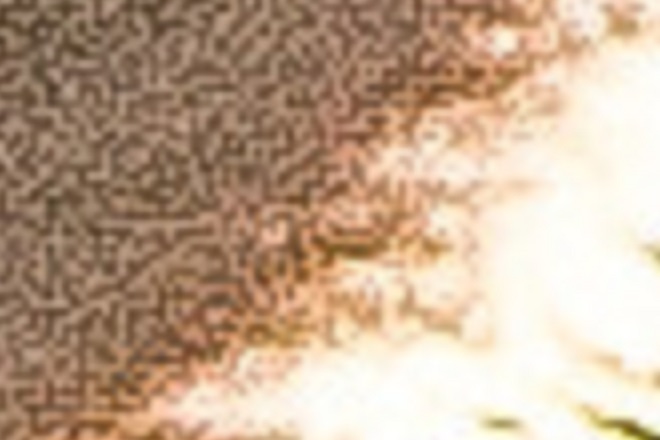 An 8X magnified crop of an area near the top center of the above crop. Notice the 'stairstep' patterns along the diagonal area of contrast?

When you increase contrast you make the light response curve steeper and minor differences in brightness in the midtones are amplified. In effect you are forcing all pixels to be very dark or very light with not much in between.

It's just a guess, but my hunch is the dark lines in the first image are those pixels most influenced by blue filtered pixels and the lighter lines are those pixels most influenced by red and green filtered pixels. Keep in mind that all three color values for each pixel are usually interpolated during demosaicing. This is because some of the entire visible spectrum gets through all three different colored filters of a Bayer mask.¹ Some of the green filtered pixels between two blue colored pixels are being pulled darker. Most of the green pixels are being pulled with the reds towards lighter. That would explain why the lighter colored lines are usually two pixels wide and the darker lines are single pixel width.

When almost all of the light in a given area is near the same color (in terms of chroma) the only thing the demosaicing algorithm has to differentiate one pixel from the next is brightness. The veiling flare caused by the sun makes the brightness from one pixel to the next more uniform than would otherwise be the case. This might explain the phenomenon of longer straight lines of darker and lighter pixels rather than a more random distribution as seen on most of the second photo.

¹ Not only that, but also because the "red", "green", and "blue" filters we use in our Bayer masks are not the same colors as the 'Red', 'Green', and 'Blue' colors emitted by our RGB displays. Red, in particular, is nowhere near the same. Our Bayer masks tend to be centered on about 590-600nm (an orange-yellow color) that is closer to what our retinas' "red" L-cones are most sensitive to (around 565nm that is a yellow-lime-green color) than the 640-645nm our displays emit for the red channel.

The maze artifacts are from the demosaicing alrgorithm.

And the discussion of DCB here: https://rawpedia.rawtherapee.com/Demosaicing

Related What are the pros and cons of different Bayer demosaicing algorithms?

To confirm ben rudgers' analysis, I took the NEF file you supplied and ran it through RawTherapee.

Here's an enlargement of a similar crop with no adjustments and the default "amaze" demosaicing algorithm: 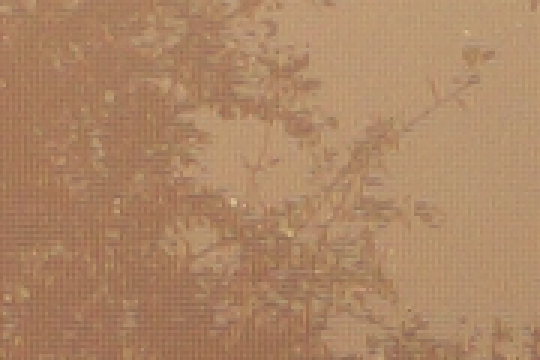 Here's the same with "DCB" algorithm: 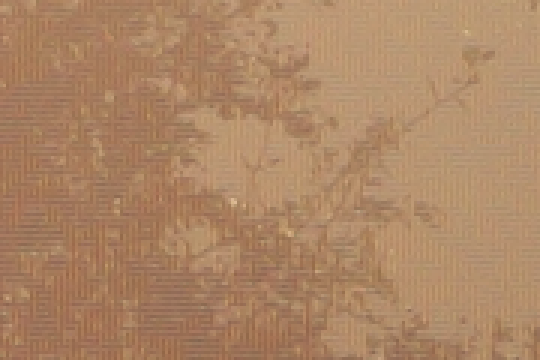 And here's the same with the "VNG4" algorithm, which is known to be resistant to green-crosstalk, but a little less sharp overall: 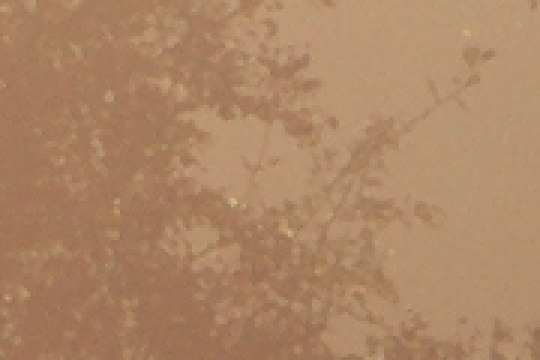 The problem area is pretty much ideal for bringing out this issue: the values in the red and blue channels are very different (blue is nearly zero, red is similar to green), there are patches of low detail (the artifacts are more apparent without actual detail covering them up), and this part of the photo is near a corner, where the light is reaching the sensor at a lower angle, making the crosstalk more likely to occur.

Not the answer you're looking for? Browse other questions tagged nikon noise nikon-d7000 darktable or ask your own question.

5
Where are these maze-like noise patterns coming from in this tit photo?
56
Why are Red, Green, and Blue the primary colors of light?
26
What are the pros and cons of different Bayer demosaicing algorithms?
19
RAW files store 3 colors per pixel, or only one?
1
What is the maze-like pattern in a magnified full-size review of my image?

6
Red Haze across right and top of photo
1
What is the source of excessive noise in images from my D7000?
5
What ISO should I use on my Nikon D5200 to avoid visible noise in 4×6 prints?
8
Photostacking - Why does this technique fail for my astrophotos?
0
D800 suffering excessive noise at low ISOs
6
Long exposures create red noisy glow.. but only with one of my lenses. Why?
7
Is this long-exposure artifact a sensor defect or light leak?
4
Will a Nikon D810 give me more fine detail than a D610 for macro enlarged shots?
11
What is this grid-like pattern on the sky in photos?