How do I set hyperfocal distance meter on a Pentax 50mm lens, if I want bokeh?

I have just bought my first DSLR, a second-hand Pentax K-x. I also bought a prime lens (SMC Pentax 50/f1.7) and now I am struggling with the following basic question:

How do I set the hyperfocal distance meter properly when I actually want to shoot at f/1.7-2.2 and achieve out of focus blur/bokeh?

How should the ring be set? I read some articles in the internet and watched some lessons on youtube but I still do not understand why the red diamond is positioned at f/4. 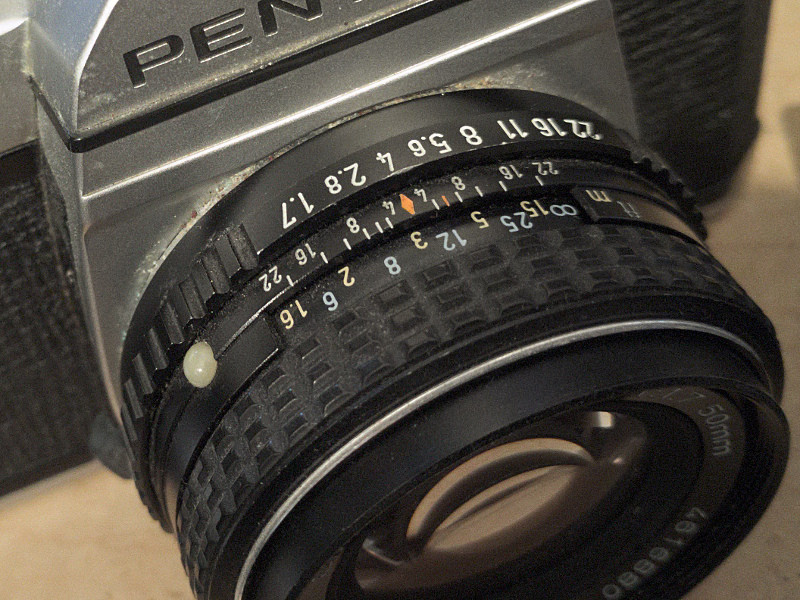 The hyperfocal method is a way of insuring that everything in the background appears to be in focus in the final image as it is displayed. If you want your photo to demonstrate background bokeh then the last thing you want to do is shoot with the aperture set narrow enough that the subject distance is within the hyperfocal distance.

The concept of hyperfocal distance is based upon the illusion of depth of field. There is only one true focus distance. But things on either side of that distance appear to our eyes to be in focus when the blur they demonstrate is too small for our eyes to see it as blur. As the aperture is set to a more narrow setting the depth of field increases. When we have set the aperture so that the depth of field extends from the subject distance behind it to infinity we are using the hyperfocal distance. This is the opposite of blurring the background to get bokeh.

In order to get background bokeh you need to set the aperture wide enough (lower f-number) and use a subject distance short enough that the background is well behind the limits of the depth of field given by the choice of focal length and aperture (as well as display size and viewing distance which also affect the perceived depth of field).

For more on how to read and use the Depth of Field scales on older lenses, please see: What are "Depth of field and focus scales"?

The red diamond is not positioned at f/4. The DOF at apertures larger than f/4 is so shallow that the range cannot be easily placed on the lens scale. If you want to shoot with the lens near wide open (f/1.7-2.2) the DOF is so shallow that you probably shouldn't be overly concerned with hyperfocal distance.

With an older, manual-focus film-era lens like that, because the focal length is fixed, the rings can be used, kind of like a slide rule, to set hyperfocal distance.

The red diamond is simply there to show what aperture the lens is set to. In this case, with this image, the lens is set to f/4. And the DoF scale is only marked down to f/4, so if you're using an aperture larger than f/4, the DoF scale is useless. This actually makes sense, because hyperfocal distance is setting your focus distance and your aperture to get the maximum possible depth of field--this is the very opposite goal of attempting to get background blur/bokeh. So, if you're setting the lens to f/1.7, hyperfocus doesn't matter. Just focus the lens as accurately as you can.

If, however, you're taking a landscape shot and you want to have as much of the scene be acceptably sharp, then, if you were shooting with this lens on a 35mm film camera, and you wanted to set the aperture to f/16, then you'd set the infinity on the focus ring opposite the "16" on the DoF scale on the left, and whatever distance on the focus ring was opposite the 16 on the right, would show you the closest distance of your DoF (i.e., the distance from which everything to infinity would be in focus).

But the key to this is that these numbers were all calculated for 35mm film in the film era when most folks could agree on what "acceptably sharp" meant. Today, when you can blow any image up to 400% in post, there's a bit more disagreement. And you're using APS-C digital. So that DoF scale may or may not work for you and how you define "acceptably sharp".

This lens barrel also features a depth of field scale. Again the red diamond is the index point. To the left and to the right of the red diamond are duplicated f/number (aperture) markings. These remain stationary as you focus however the distance digits move as you focus. The scale is used to help you predict the span of depth of field that will result from using a specific f/number. The span is: distance opposite the left duplicate f/number to the right duplicate f/number. This is the span of DOF should you use that f/number focused at the distance adjacent to the red index diamond. Caution: DOF is a subjective.

As an example, you are focused on an object 3 meters (10 feet) distance. Opposite the 16 on both sizes of the index are 6 feet (3 meters) and 20 feet (9 meters). This scale is telling you that the depth of field span is 3 meters to 9 meters provide you set the camera’s aperture to f/16.

To set the camera to the hyperfocal distance for any given aperture (f/number), note the DOF scale. Set the ∞ symbol opposite the f/number on the left side of the scale. As an example, you chose to use f/16. Adjust the focus to align the ∞ symbol with the left 16 of the DOF scale. You are now set to the hyperfocal distance provided you set the camera to f/16. The distance focused upon is 17 feet (5 ¼ meters). The DOF is 8 ½ feet (2.6 meters) to infinity ∞.

This may be a very important point as to using this camera and lens: Are you quite sure that the camera in the picture is a (Digital) DSLR. It looks like the K-Series film Pentaxes, does not look like the digital Pentax also named and labelled K-x, and the Pentax film SLR's reached their height of development with the Pentax KX, an outstanding film manual Single Lens Reflex (SLR)camera. But note the difference between nomenclature: Pentax KX and Pentax K-x.

The lens, a Pentax f1.7, is reputedly superior to the Pentax f1.4. The difference between the two maximum apertures is trivial. (I have these cameras.) I must ask the question: have you used the camera and does it take film or does it take a digital SD Card?

If it is a picture of the actual camera you have, then your question is important but the answer is simple. The lens is set for an f4 aperture, and the bokeh, circle of confusion, background blurring is maximized at that aperture. (Let's forget about the wider f1.7 for a moment.)

As to your question, just about everyone else's answers pertain well to it. I just can't see how that camera can be used without film, and believe me, I feel a little older right now.

43
What is "Hyperfocal Distance"?
8
Why did manufacturers stop including DOF scales on lenses?
8
What are "Depth of field and focus scales"?
0
What is the depth of field if the the focus distance is set to infinity?