I'm looking into camera lenses and have seen two referenced as what certain bloggers use to take a certain kind of light-filled "perfectly overexposed" strong-bokeh picture that I am partial to, like this:

My question is, if I'm going to be shooting at a large aperture (let's say f/2.8) on either lens, is there a noticeable difference between what the resulting images will be? Is it ultimately a question of just prime vs. zoom lens? 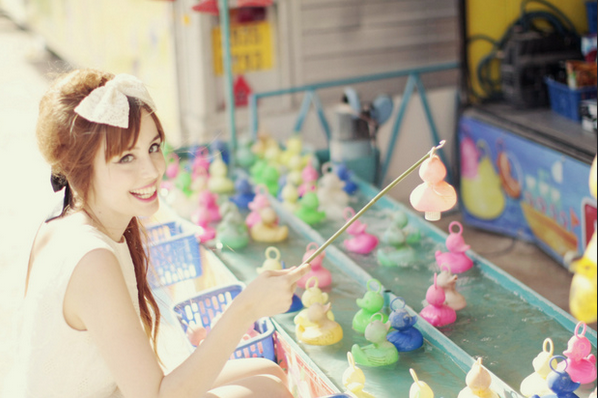 Here's another image that I like that was taken on a Leica Summilux 50mm f/1.4 that's far too expensive, but can give you another idea of the look I like. Not quite as sunny, but still the vivid yet light-filled/faint look I like, for reference. Like in the kind of angelic glow around the skin and the saturation of the parakeet. 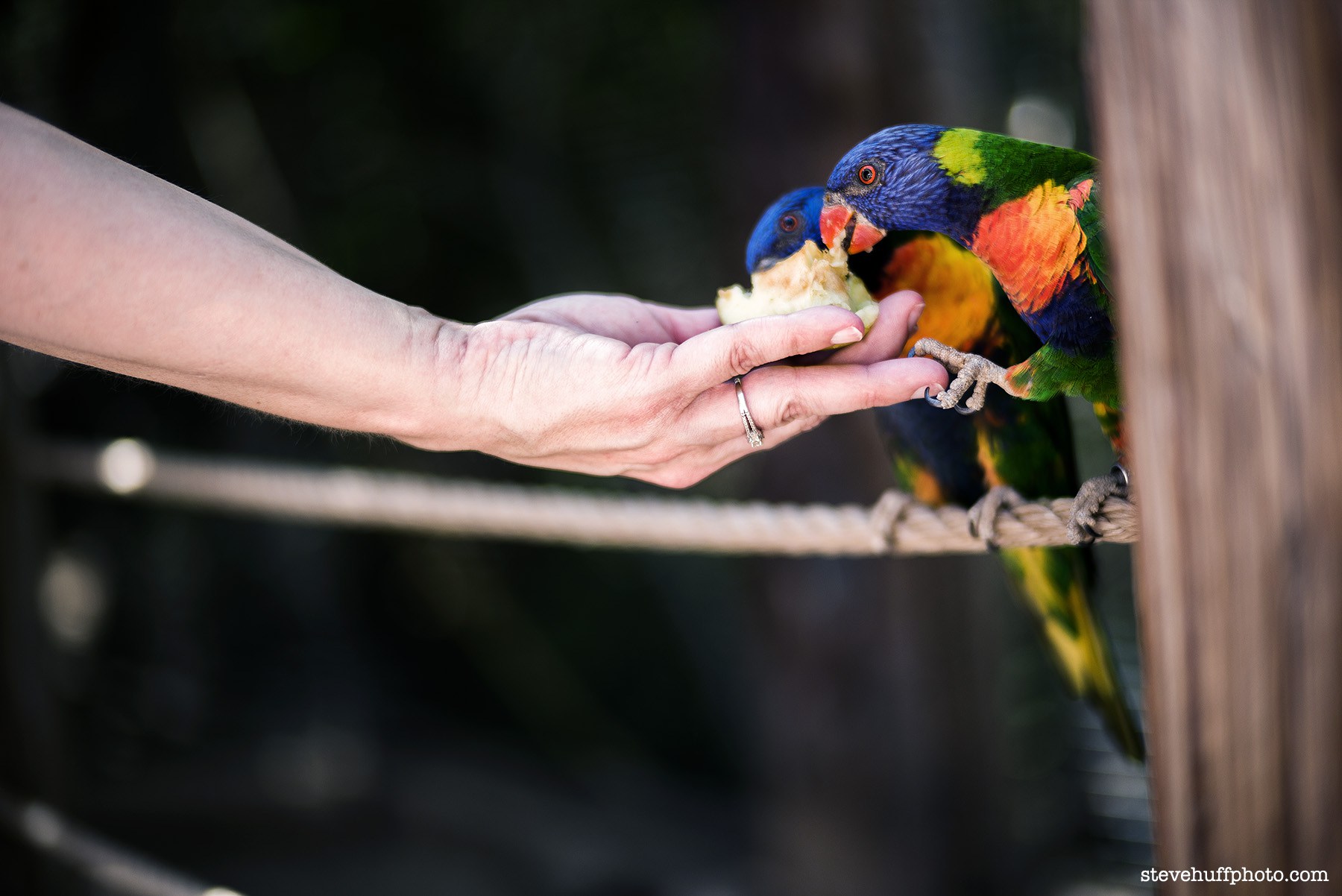 The dreamy effect in the first is caused by overexposure of many of the highlights including a lot of the subject's skin, an intentional (at least let's hope it is intentional!) color cast, and a center of focus past where we should expect it to be. The focus is centered somewhere between the model's knees and the foremost green and blue ducks in the nearest water channel. Or maybe it just looks that way because the fine details are overexposed out of everything else anywhere close to the subject distance. The depth of field is not exactly extremely shallow in this one.

The second image is exposed to make the skin tones look realistic, the color is very neutral and natural in terms of temperature, and the focus is squarely centered on the eye of the nearest bird which is also almost the same distance of the ring on the human's hand. The only thing I can see that is remotely "dreamy" about it is the very shallow depth of field.

The one thing I see in common between these two images is that both use color to go a long way towards setting the mood. But the mood each sets is totally different to my eyes.

In the context of the endless possibilities regarding color afforded by raw digital images how does the color mood you wish to create relate to lens choice? The answer is it pretty much doesn't.

Back when color temperature/white balance choices were limited by available films and standard filter colors a "warm" or "cool" lens could have a real effect on the final image with which you wound up. But color casts caused by lenses, as well as differences in contrast (within the reasonable limits of the lens' ability to resist veiling flare) are easily correctable in post and you can now make photos taken with any lens you choose look any way you wish in terms of color and contrast.

The lenses you mention have excellent reputations and price tags to match, but you can shoot photos in that same light-filled, low depth of field style with less expensive lenses. For example, Canon makes the EF 35mm f/2 that obviously has an even larger max aperture (and therefore blurrier foreground and background) than the EF 16-35 f/2.8, but the price is $600 instead of $1500.

Consider your first example. There's lots of light on the woman's back and on the background behind her. She's facing away from the light, but there's still plenty of light on her face, so there must be something outside the scene that's providing light. That could be a flash, but more likely it's a reflector or just a big light-colored wall that's bouncing some of that bright light back at her. The photographer made sure that her face was properly exposed, which let everything in direct sunlight be somewhat overexposed, and the aperture was selected to provide the desired amount of blur in the background. You can take that shot with a built-like-a-tank L lens that's outstanding in every way (weatherproof, too!), or you can take that shot with a more affordable lens that's still very good optically. But here's the thing: just using the L lens won't make your photos look like the example. The lighting is what's really important in getting that bright look that you're after.

if I'm going to be shooting at a large aperture (let's say f/2.8) on either lens, is there a noticeable difference between what the resulting images will be?

Well, you're talking about two different lenses with different apertures and focal lengths, so yes, there's going to be a noticeable difference between them. Longer focal length means narrower angle of view. Let's say you take a photo with each lens where the subject fills the frame. The shot with the wider lens (i.e. shorter focal length) will include more of the background.

Is it ultimately a question of just prime vs. zoom lens?

Prime lenses are simpler, with fewer elements, so they tend to be sharper and less expensive than zooms, and they tend to have larger apertures. But the differences you seem to be concerned with have more to do with focal length and aperture than anything else.

Zoom vs. prime is entirely meaningless.

It's ultimately a question of absolute aperture (aka exit pupil) in mm. Divide focal length by wide-open f-stop. Bigger numbers are dreamier.

And yeah, longer lenses mean dreamier defocusier backgrounds. But that 200/2 is probably out of your price range :-)

You should also consider looking at some of the new Sigma "Art" series lenses. They have been comparing very well against Canon's lenses (the Sigma 24mm F1.4 Art took the 2015 TIPA award for "Best Expert DSLR Prime Lens" and the 35mm F1.4 Art won the same award for 2013) and their pricing is downright reasonable compared to Canon's L lenses

I have a 18-35mm F1.8 Art from Sigma and it is an outstanding lens if you're shooting with a crop sensor body

Not the answer you're looking for? Browse other questions tagged photo-editing depth-of-field camera-settings camera-recommendation bokeh or ask your own question.

15
Would a prime be redundant with a fast zoom?
13
Other than speed and weight, what advantages might a prime lens have over a zoom at the same focal length?

9
Does a 35mm prime lens show the same bokeh as a 50mm prime lens on a cropped sensor?
11
Are there written guides or rules of thumb for setting color saturation, clarity, vibrance, etc. in post-processing (or in general)?
2
Is 24mm F/1.8 Prime lens blur bokeh is good (not distorted face) for portraits
1
Getting this radiant but soft glow, without losing color intensity or looking overexposed?
1
Sharpness and bokeh comparison of Nikon 50mm f/1.2, f/1.4G and f/1.8G
1
How do I set hyperfocal distance meter on a Pentax 50mm lens, if I want bokeh?
10
Should engagement photos all be edited with the same style?
1
Which lens should i choose for bokeh while video streaming?