How to restore as much detail as possible to a scanned image of an inkjet-printed page?

I have a photograph printed with an inkjet printer on a piece of paper. Unfortunately, I do not have access to the original file. Here's a small sample of what I'm stuck with: 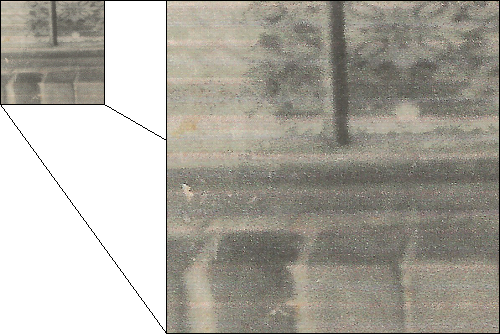 Is there any way to make this image look less like a printed sheet of paper and more like an actual photograph? The horizontal bands from the printhead and the halftoning are quite obvious.

If possible, I'd prefer solutions that involve free software.

You have several problems:

The last will be hard to fix, since there is no easy way to distinguish the artifacts from real image data.

However, there are ways to deal with the first two problems. What I've found works best when trying to capture halftone images is to start by scanning at very high resolution. You want each of the pixels to be either the ink color or the paper color, not some blend of in-between like your eyes perceive the image. Put another way, you want to resolve each of the halftone dots with a decent number of pixels.

You then filter the very high res image down to a size where the halftone dots can't be resolved anymore. Now you have a true gray scale image. Start by making the darkest point black and the lightest white. Then you can apply a little non-linear mapping to make more detail in the dark areas visible, for example.

For example, here is the highest resolution scan you've given us: 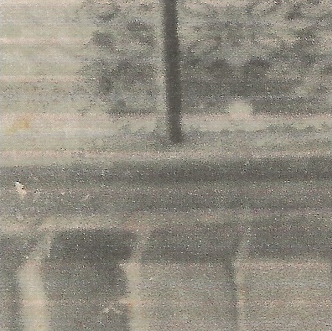 And here it is with the whites white and the blacks black:

That is probably too extreme due to this snippet being taken in isolation. The black and white levels should be set from the whole picture globally.

Here is after some non-linear brightness curve adjustment:

Try combining the image scanned horizontally and vertically. Align the images as close as possible and print the composite to minimize the scanning artifacts. Even if you have only one image as the original, there will be some improvement as no scanner and printer is perfectly aligned both in the scan and the cross-scan directions.

Not the answer you're looking for? Browse other questions tagged printing scanning restoration or ask your own question.

15
Online Printing API?
4
How can one image be printed in multiple sizes without losing content?
2
What are these artifacts I see in print?
2
How can I get an image image printed so it retains the detail I see zooming in on screen?
8
What printing solution will best provide me with high quality, archival prints with a consistent workflow?
1
How do I ensure that the colours printed more closely align with Relative Intent in Lightroom?