This was made by the East German incarnation of Carl Zeiss in the 70s. The plastic part to the right is the M42 to E-mount adapter.

I'm wondering what the lever in the center of the first image does. It seems to have 3 positions but doesn't have any visible effect. 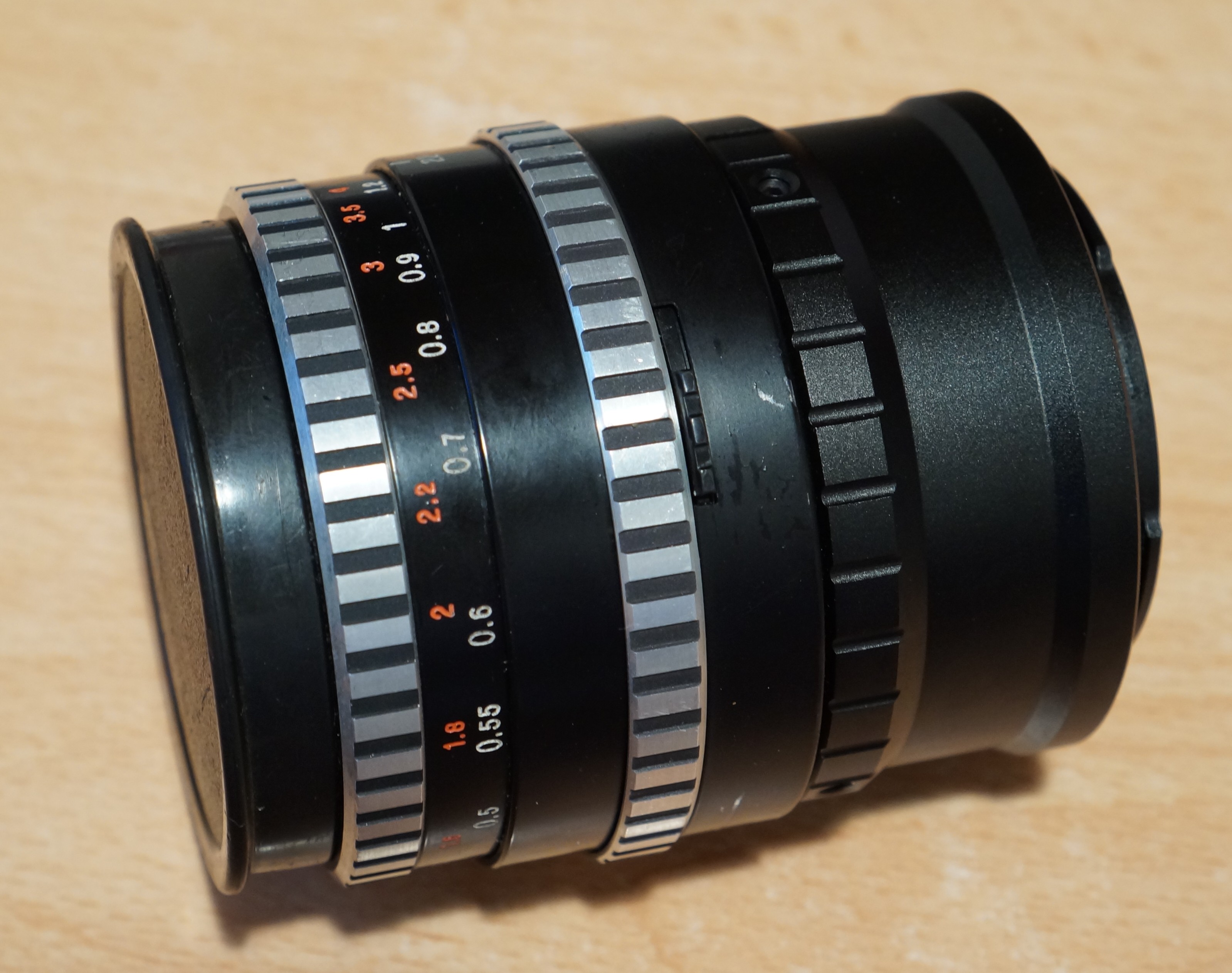 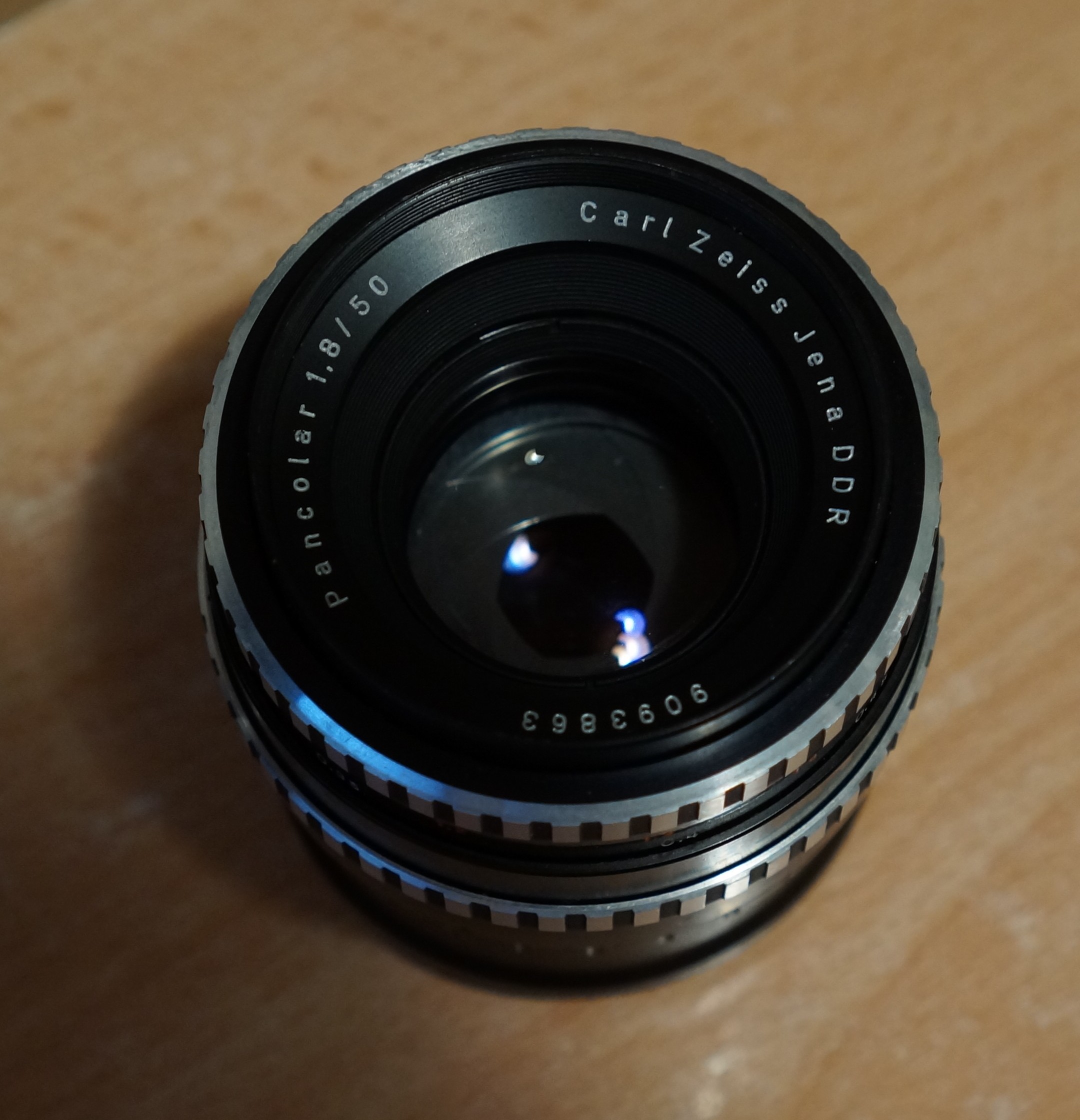 This is the first, "zebra" version, optically the same design as Pancolar 2.0/50. The aperture control switch ("tumbler") should have 2 positions, "A" is counter-clockwise when looking at the front element, "M" is clockwise when looking at the front element - not 3 positions. The rear part of the lens should have an actuator pin that, when pressed, makes the aperture to stop down. Take the lens out of the adapter, remove the lens cap, play with the switch, the pin, and the aperture ring, and you will see how it works. In "A" position the aperture is not closed until the pin is pressed, and should immediately return to open when the pin is released. In "M" position the pin does nothing, the aperture is opened/closed following the aperture ring position. Your adapter may be fixing the pin in a pressed position (not enabling auto-aperture feature), and in this case the position of the tumbler does not matter.

This isn't a definative answer, but a speculation and something for you to check that's too long for a comment.

I'd be surprised if the lever had a visible effect. Try turning the focus and f-stop rings at the different positions and see if there is a difference in feel or motion range.

I have a pre-war Carl Zeiss Jena 50mm lens that has a separate ring that works with the f-stop setting. This ring is spring-loaded so that you could pull it to one end of the lens (can't remember which way), then let it settle back into a specific slot, of which there was one per f-stop. This became the hard stop for the maximum f-stop you could set the f-stop ring too.

Cameras at the time didn't have wide-open f-stop preview like we take for granted today. You set the hard stop ring to the f-stop you wanted to use, rotated the f-stop ring to full open to focus, then rotated it back against the stop you set to take the picture. This way you didn't have to take the camera from your eye between focusing and setting the desired f-stop.

By the 1970s, most cameras had auto stop-down, but technology in the DDR was largely a snapshot from 1945. It is therefore reasonably conceivable that this lens had to work with cameras that did not have automatic full f-stop preview.

Given your lens is old and made by sortof the same manufacturer, this might be a similar mechanism in a different form. (The reason I say "sortof" the same manufacturer is that Carl Zeiss Jena was a mere shadow of its former self during the East Germany days, since Jena was in East Germany. Lenses made those days weren't the same legendary optics this company produced before the war.)

I have this lens also and indeed the switch is controlling the blade pin. Did not see this until i removed my eos m42 adapter. PS. love this lens on my 5d4 https://flic.kr/p/23n6pCY

Not the answer you're looking for? Browse other questions tagged lens old-lenses zeiss m42 or ask your own question.

13
What should I do to switch my gear from Sony to Canon?
5
Focus shift when stopping down on Zeiss Primes?
17
Which prime lens for Pentax APS-C?
6
How can I use Pentax lenses on a Lumix FZ18?
5
Which is the best version of Helios 44 series 58mm f/2 M42 mount lens
1
Why do I see focus less accurately in my DSLR's viewfinder and screen with old lenses?
2
How do I get the best sharpness from a Zeiss Jena Pancolar MC lens?
3
Is there any way of dealing with or reducing lens vignetting with a wide angle?
3
Has anyone had consistent success in using M42 lenses via adapter on the 5D MkIV?