I have a good number of colour negatives that I've shot over the years. My university also used to have a machine to process colour paper, although that was thrown out. As a result, any photos I wish to print from these negs need to be printed in black and white, however, I have heard from members of our photo faculty that regular paper does not respond well to the colour of the film-stock.

My question here has two parts:

Setting aside the filtration that you will need to do to try to get the color casts of the color negative into the image... lets look at the density of the negatives - how much light shines through them and how clear they are.

So that I get relatively consistent data sheets, I'm comparing Superia 200 with Neopan 100 - both made by Fuji.

The color film has a dye density that varies with wavelength of light (the colors in the film itself), but you can get an idea of what the density range of the film is: 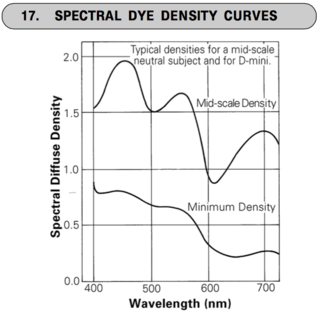 The density of the film is going to be mostly something between 0.5 and 2.0. There is nothing that is at 0.0 (clear). And its also not a nice curve by any stretch of the mind. This isn't a problem for color paper - its designed for the dyes at specific densities and wavelengths.

There is also the density curve of each color: 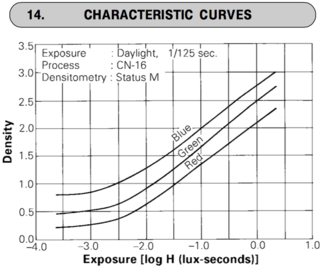 Note there that the density for each color is different, and has a different toe shape.

On the other hand, black and white film is a bit more sensible. 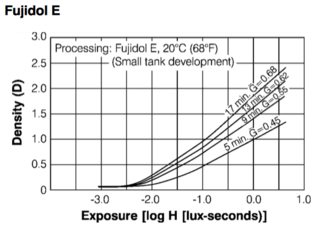 You will not get the same range on the paper from color negatives as you would on black and white negatives. The information just isn't there.

Next, one of the big gotchas is that the filter to correct for the orange cast to the negatives is very close to the safelight color. This makes it hard to get that information into the paper.

Overall, you are going to end up with a rather flat print with little contrast when printing to black and white paper.

Reading some old forum posts on photo.net such as Printing of color negatives to B&W paper? and Panchromatic paper? (the paper you are after was known as Panalure - discontinued in 2003) there isn't much interest in making the paper and the general consensus is to just scan and print from there.

You can try with various modern papers and various filter packs to see what works best for your negatives. Remember that the wet darkroom is where the interpretation of the negative is done. What works for one person with a paper and a given negative may or may not work for you. You are likely going to spend a (un?)reasonable bit of time trying to get your prints done that way.

Now days, I'd scan it, do the interpretation in photoshop and print on an appropriate printer.

At this writing, color paper is still very much in production and very easy to get. Kodak only produces it in rolls, but Fuji and a few other brands still produce it in sheets.

If you're planning to make prints in a darkroom, you should be aware that almost everything about color is different from black-and-white. You will not be able to process color paper using B&W chemistry in a darkroom without the proper equipment, nor will you be able to load color paper into a machine that makes B&W prints and have it work.

There are plenty of places that make prints from negatives. This may actually be a better alternative, because there's a much wider variety of paper available in roll form. This should continue to be the case for quite some time, as the better digital printing equipment exposes paper and doesn't deposit ink on it. If you need more control over what gets printed than those services offer, scan the negatives and process them digitally.

I am not aware of any currently available panchromatic paper, but the retailer has stellar customer service and is just a call away. If at all available, these papers will most likely have special requirements for darkroom illumination.

I remember that decades ago some labs used ordinary very high contrast B&W paper to print from color negatives. The results were not stellar, but if you have a darkroom, you can try it to see if the quality works for you.

The best option is to scan the negatives and process digitally.

Not the answer you're looking for? Browse other questions tagged film printing paper darkroom or ask your own question.

6
How to read a film color response chart?

5
What is a cost-effective inkjet paper for good IQ but without archival requirements?
9
What double-sided ink jet paper is best for printing fine-art photo books at home?
6
How to choose the kind of paper for an inkjet print?
3
Paper for Pigment vs Dye Inks?
8
How can I make my own coatings for handmade paper for inkjet printing?
2
How do I print with an Epson SC P800 onto real Hahnemuehle watercolour paper (un-primed for inkjet)?
1
Omega D2 enlarger - Is it really for 4x5 negatives?
1
Are materials for printing from color negatives in darkroom still available in 2019?
1
Consistent black horizontal lines on colour negatives