Would a 85mm lens have allowed me to blur the background better in this photo of a DJ in action?

This is the picture I took: 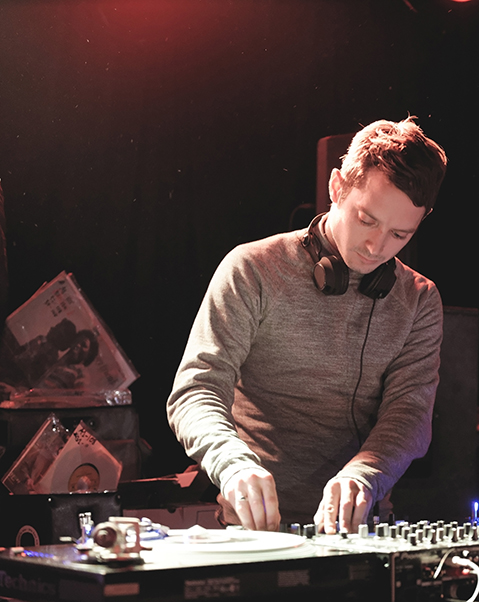 I will be happy to know as many issues and suggestions you have on the photo but my main question is this: Notice the background is not blurred enough, not to be fully blurred but still some more blurring that makes the background less distracting. So do I need a 85mm lens to achieve this? or I should be able to do it with this lens too and need more practice? or is it just that with this distance of me and him and he and the back, it is not just possible?

Okay, so, really, two aspects here. First, would an 85mm lens let you blur the background more? Probably, because the framing for a longer focal length decreases the apparent depth of field, and because there are reasonably-priced and readily available 85mm prime lenses with wide apertures and generally nice technical image quality . But it's not a particularly magic number — any long, fast lens will give you that kind of result. If you want more of that than you can get with your current lens, and you can't get closer for the framing you want, any lens that's a longer focal length and the same or wider max aperture will do.

But, second (and unstated): are you sure that that's what you really want? Getting rid of "distractions" is an easy way to get straightforward, obvious results (and therefore win Internet photo competitions), but isn't necessarily automatically better. In this particular case, I think the records in the background add significantly to the context of the image and would be much more distracting were they out of focus.

In fact, I wish for more sharpness in the turntable in the foreground left — I want more depth of field, not less. The whatever-it-is behind the DJ's head is a bit unfortunate, but I'd solve that by moving slightly, or by removing it digitally, or just not worrying about it. (A little more blur wouldn't remove it anyway — what you need is lighting separation, and in this situation that's probably not under your control.)

If I were to be concerned about anything technical in this image overall, my main concern would be the blown-out details on the DJ, probably due to poor lighting. His hands are particularly unfortunate here, since they are naturally a center of attention — I'd go so far as to say that for me, they are the main part of what the image is about, so it hurts to have them looking so... compromised. Unfortunately, this is a really tough situation — and a different lens won't really help that aspect (85mm or otherwise).

Although going with a longer lens would give the illusion of a shallower depth of field, it doesn't actually change in a situation like the one you propose.

I created ƒ/Calc to help photographers work out the answers to problems of this sort. As far as I'm aware, it is the only photographer's calculator that incorporates several different calculators into a single app, and ties the outputs of one calculator to the inputs of all the others, where that makes sense. This means you can move from tab to tab in the app, exploring the consequences of a change, without copy-pasting values between them. This removes a lot of the work that makes photographers give up on answering a question before they've found the answer.

Here's how it works in this particular case:

Now, all of that having been said, the illusion that is behind the myth that started this question is still in play. It has to do with background compression, which appears to magnify the background. This increases the background's apparent blur, just as if you'd blown up the background digitally. This means you get the effect of less depth of field, even though DoF hasn't actually changed.

I don't think the difference between 62mm and 85mm is enough to give you the effect you want, though. I think you'll get a lot more value out of going to a wider aperture.

You could go snag an old 85/2 off of eBay, for example, which would knock about 0.4m off the DoF when wide open. Be careful: manual focus will slow you way down on a shot like this, because you have very little DoF to work with and not a lot of light to make the judgement call with. If you switch to a newer autofocus 85/1.8, you cut DoF to about 0.09m wide open, and can let the camera figure out the focus distance. There is also an ƒ/1.4 lens in Nikon's current lineup which will cut DoF down to 0.071m for about twice the cost.

You have my blessing to buy all of these lenses. :)

Personally, the background is great. Mostly bare but a couple mood-setting items. Just paint out the stick coming out of his shoulder. Perhaps intensify the red-black wash effect.

The problem with the photo isn't the background at all, but the foreground. The arm and hand is brighter and higher contrast then the face. So make that the focus of the composition. But you can't see anything intetesting there.

To get that exact shot, with the same perspective and framing but with shallower depth of field, your only option is to use a wider aperture.

Since you took it at maximum aperture on that lens, you'd need a different lens whose zoom range covers 62mm with a wider aperture.

Alternatively a wider lens (e.g. 50 or 55mm prime, f1.8 or f1.4) and crop the image in post processing. You could probably find a prime with better bokeh and wider max aperture.

Not the answer you're looking for? Browse other questions tagged lens technique bokeh or ask your own question.

2
How do I make my photos look like these soft, yet sharp and colorful examples (using Lightroom)?