I'm using a Canon T2i and I was sitting in the audience taking some photos for my friends. (I'm not the wedding photographer).

I took this shot with the 50mm f/1.8 at 1.8 and at 100 ISO. No flash, Spot metered on the brides face.
I take all of my photos 2/3 steps underexposed, so after putting this in Lightroom, I noticed a lot of grain. Is this grain normal for the T2i and will a better sensor yield better results? 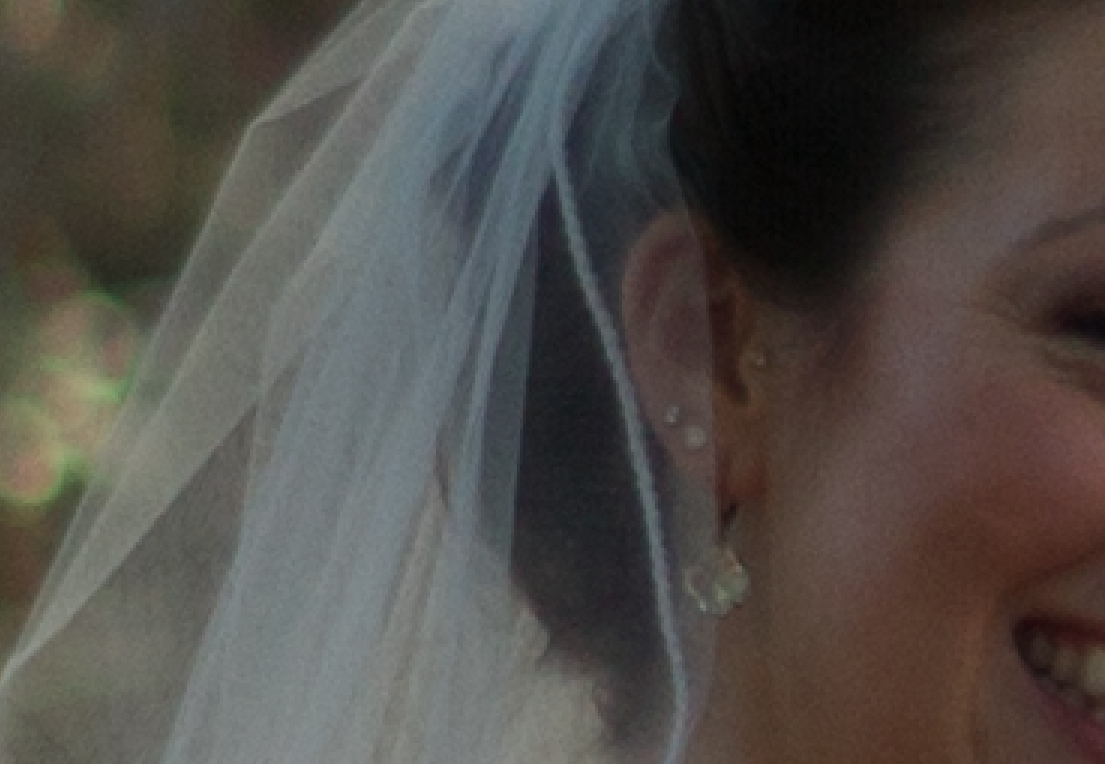 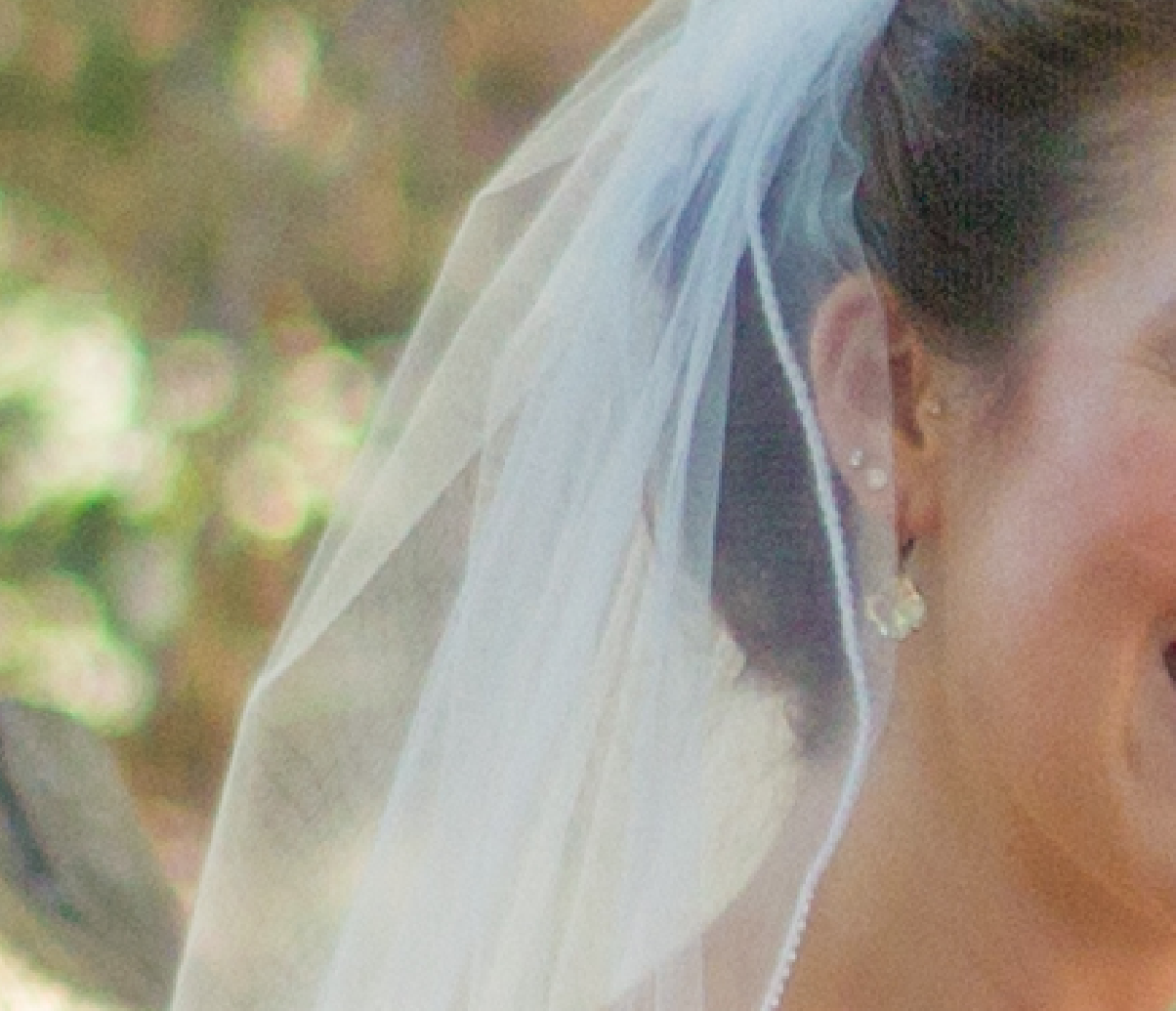 Is this normal for a T2i. I know I'm extremely zoomed in and everything will have grain in it no matter the camera, but will this be better on a better camera? or will the sensor pick up and fake the same amount of grain?

Here's another full sized pic that you can very noticeably see the grain in the image. http://i.imgur.com/hYwiO04.jpg This picture was taken on a 30 second exposure. I turned up the vibrance a bit and even upped the luminosity to get rid of some of the grain, but even not zoomed in, you can see it.

I just always notice real photographer's pictures seem to turn out much more clear. Any tips?

Noise is caused by not having enough light hit the sensor.

So what can you do? 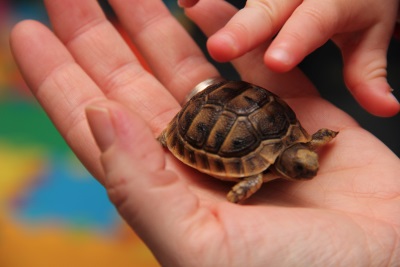 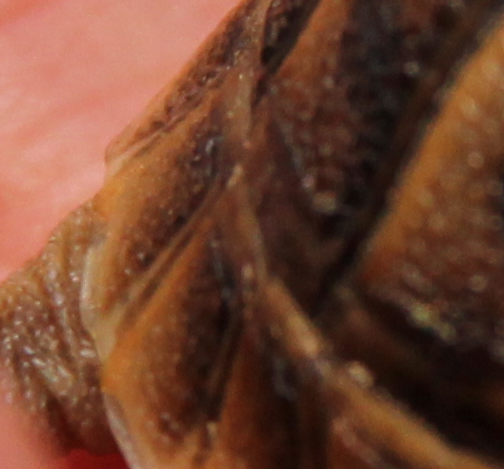 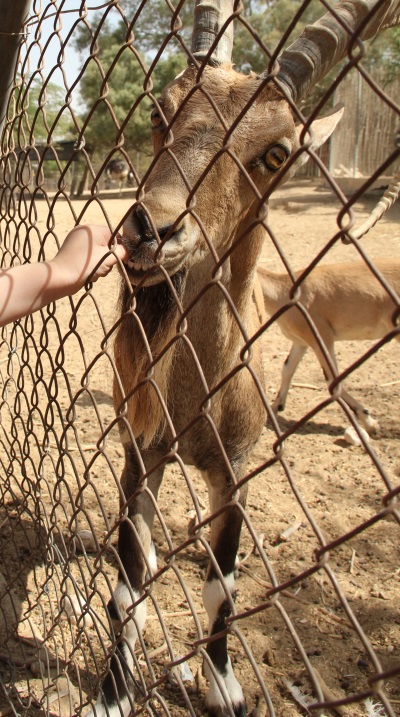 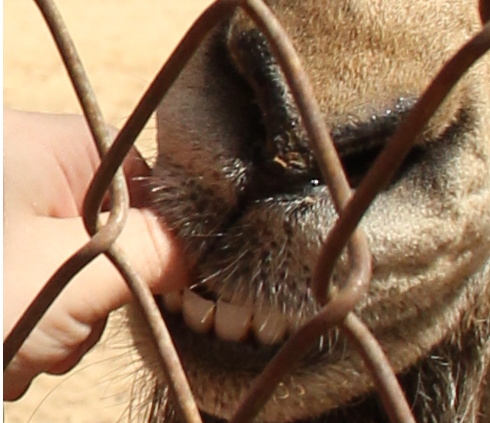 Most of the noise appears to be a result of the underexposure. Did you shoot RAW or JPEG? The underexposure hurts in the dark parts because it is falling outside the dynamic range of your sensor and if you aren't shooting RAW that will be greatly compounded. Some underexposure is nice for highlight prevention, but if you go too far, you are going to sacrifice a lot in the shadows, particularly with a camera with a relatively small (comparatively) dynamic range.

A lot of the distortion looks like aberrations from the lens as opposed to noise too. (I mainly only see noise in the dark parts that got too underexposed and were boosted too far back up.) Better optics are generally the reason that professional images look so much better. Photos on my old xTi look far better when I slap on my 24-70 f/2.8 II. Sure they look better on the 5D Mark iii, but the optics make a huge difference.

Did you shoot raw? If you did, then you have greater control over both colour and luminance noise reduction as well as sharpening. It looks as if you've lifted the exposure on a JPEG which doesn't have quite the same latitude (technically 64x less for 14-bit raw) for modification as a raw file does.

Underexposing is not ideal in most cases unless there is a significant reason for you to restore highlights and maximise dynamic range, such as landscapes. Wedding photos often benefit from a "bright, sunny disposition", and using normal or slightly brighter exposure (say +0.3EV) can produce nice results, both technically and visually.

I've tried both underexposing and overexposing but now I don't do either. I simply shoot the correct exposure and adjust in post. ETTR is not really possible in high dynamic range scenes anyway. The only time I ignore the meter in the camera is when it is off and the subject is too dark or bright due to some other factor in the scene.

Unlike raw-capable digital cinema cameras, I know Canon DSLRs do not show us the raw histogram but rather the histogram based on the tone curved, final JPEG, which makes it hard to guess when highlights are really clipping. With a raw histogram, you know exactly where the exposure lies on the sensor.

Looks like you original image taken was heavily as under exposured. Bumping up shadows showed not only grain also vertical banding which is typical for many Canon sensors.

Not the answer you're looking for? Browse other questions tagged canon canon-550d or ask your own question.

32
Is it worth to upgrade from Canon 50mm f/1.8 to Canon 50mm f/1.4 on 550d?
5
Is Canon T2i and kit lens good for shooting (2D) artwork?
11
What options do I have for a normal and fast prime lens for a Canon APS-C camera?
3
This doesn't seem very sharp…is this normal?
2
Is Canon 550D the same model as Rebel T2i?
0
Which Canon T2i bundle is better to get?
5
What factors should I consider to decide if it's worth upgrading to a “pro” level DSLR?
3
Canon 550d viewfinder exposure information issue after firmware update
1
Grain and noise: will full frame solve this?