Overexposed shots on a sunny day with Auto settings?

I have had a Nikon D90 for two and a half years now, and I have been very pleased with my purchase. Due to many many jobs and chores lately, I hadn't used it, until today. It's a sunny day today and when I actually got out of my house and took a few show in Auto settings (yes, I know auto is not the answer to everything and manual shooting could be a quick-fix to my problem, but that would NOT resolve an issue). Every single shot was way over exposed. Without the sun being in the frame, no blue could be found in the sky, just white! Too much white in the picture; all over the picture. Even walls of my home would be too bright.

Tried resetting to factory settings using the two-button combination, but did nothing. Tried lowering my ISO, still nothing! I took a look at the histograms and the peak is pushed all the way to the right of the range.

The last time I used my camera, was a few weeks ago, when I photographed the sun, WITH solar filters, so the actual light reaching my sensor was minimal. It was a sequence of shots ranging exposures from 1/4000 to 1/2000. No long exposures or anything. Just that! Could that have harmed my brightness sensor or whatever may be causing this 'burning' in the photos now?

Here is one of the photos I took earlier and since I have taken many photos of this place under the same lighting conditions before, I can clearly say no other time was such bright, but now!! I'm terrified!

Any ideas? What can be done now? 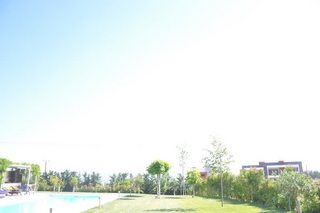 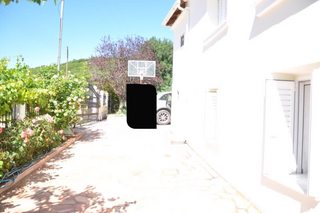 Before you get too panicky, there are a couple of things to keep in mind. The first is, as suggested already, you may have missed a setting (exposure compensation). That may not be the problem, though, since you're only experiencing the problem in very bright conditions.

That brings us to the second: to an extent, the camera is supposed to do this in Auto. You said that 1/4000 and f/4.5 at an ISO of 200 gave a good exposure in manual mode. That's really, really bright—about a full stop brighter than "sunny 16" would predict. It may (just may) be bright enough to push the camera's exposure program into its beach/snow territory, where the camera assumes that the only way there can be this much light coming in is if the scene is far lighter than average. That's the sort of thing that happens if the foreground is largely either white beach sand or snow, and the camera is actually designed to overexpose under very bright conditions to compensate (otherwise a picture taken in a snowy or white-sand setting would tend to be significantly underexposed).

As long as the camera is exposing properly under other conditions, it's probably doing what Nikon intended. If you can keep the "sunny 16" rule in mind (the shutter speed should be about 1/ISO at f/16 in clear midday conditions), you'll have a sanity check on the values the camera reports, and will know either to use exposure compensation or alternate metering to get the shot.

I don't know how D90s GUI (Graphical User Interface) looks like. But In by D5100 you can change the Exposure compensation from -5 to +5. Maybe you have changed it.

If it isn't that What lens do you have? Try change with other lenses.

It is probably something wrong between the lens and the camera. But I believe it is the settings.

Not the answer you're looking for? Browse other questions tagged nikon nikon-d90 sunlight brightness overexposure or ask your own question.

9
Group shots on a bright sunny day?
19
ND Filter not Dense enough - How do I get long exposures in very bright situations, where my ND filter isn't enough?
5
How can I make sun beams more visible in post-processing?
1
Nikon D5200 overexposed shots in "auto" modes
0
Capturing vibrant colors on a bright, sunny day
22
Canon geometric overexposed quadrilateral shapes in all of my images
1
My sensors are not working after shooting at sunset sun
1
Slow Shutter Speed on Aperture Mode
3
How could I have capture better the lighting for this photo