What kind of lens is used in this picture of Earth?

The photos in an answer to this question show the Earth as very small as seen from the moon. I suspect that the lens used doesn't reflect how our eyes would see the Earth from the moon. Is there a way by looking or measuring a picture to determine what type of lens is used? 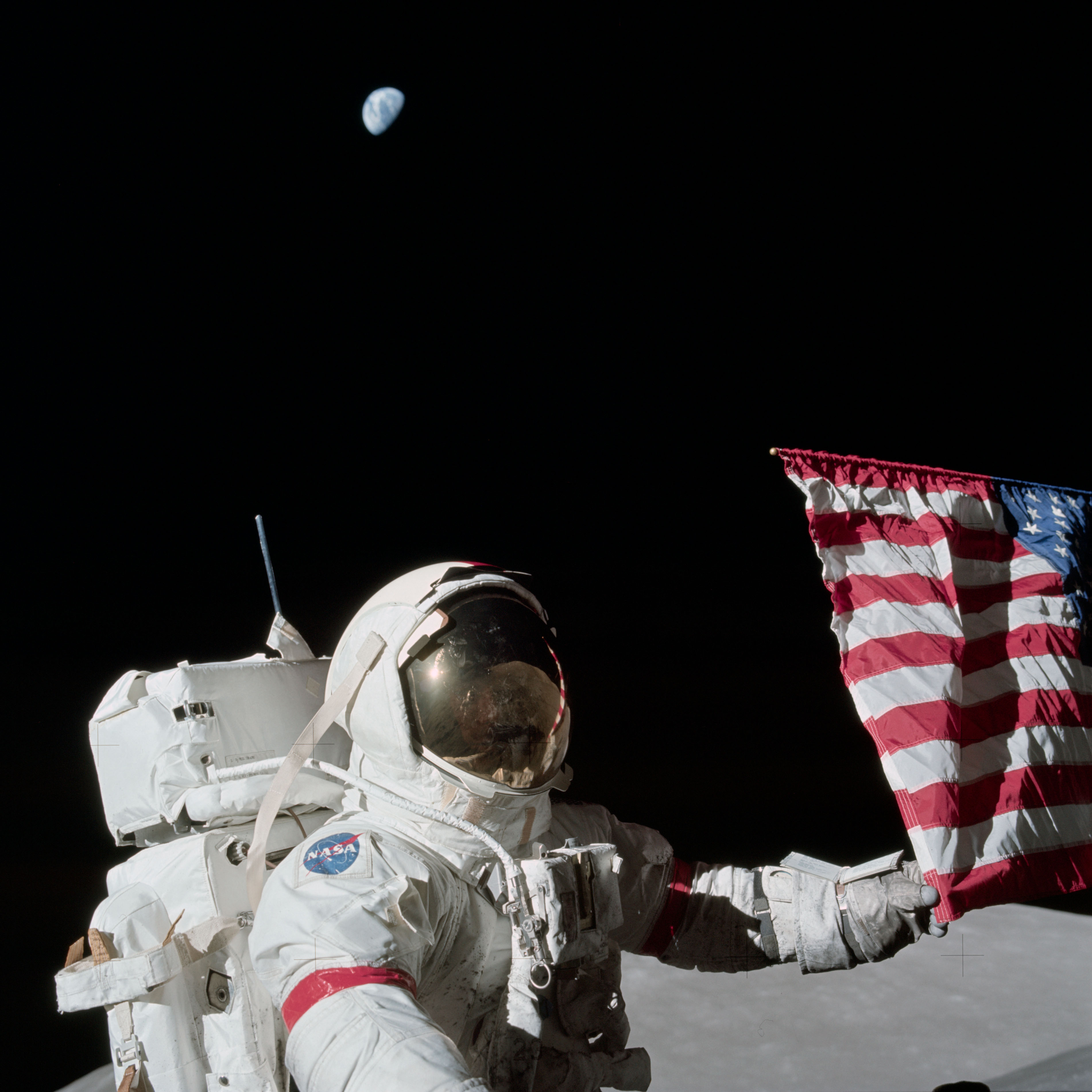 Your question is actually three questions. The first is simple and factual to answer; the second is based on possibly faulty assumptions; and the third has been asked before here.

Answering your first question, "What kind of lens is used in this picture of Earth?", from an answer to a different question about the moon missions,

Five more flights landed on the Moon after Apollo 11. On all, the photographic equipment and films were similar to that taken on the first landing. On Apollo 15, the 250mm telescopic lens was added to the Hasselblad lunar surface complement.

Regarding the second issue in your question, you said,

I suspect that the lens used doesn't reflect how our eyes would see the Earth from the moon.

I'm not quite sure what you mean by "doesn't reflect how our eyes would see the Earth from the moon". If perhaps you mean apparent size of the Earth, then you need to understand angle and field of view.

Regarding your third issue/question,

Is there a way by looking or measuring a picture to determine what type of lens is used?

Assuming you're talking inspect only the image elements (and not metadata such as EXIF data embedded in a digital image's file), you need to know a few things:

Using this information, you can probably deduce the focal length of the lens used to take the image. The more information you know, and the higher the quality of that information, the better your guess can be to determine the lens's focal length.

Related: What is the formula for percent of frame filled at a specific distance and focal length?

You are making this way too complicated.

Although saying the Earth looks four times larger than the Moon sounds like the Earth should be huge in the sky when viewed from the surface of the Moon, two degrees is still a very thin slice of the 180 degrees from one horizon to the other when standing on the mostly bare surface of the Moon, particularly in the really flat parts of the Moon where all but the last of the Apollo missions landed.

We don't really see with our eyes, either. We see with our brains. Our brains contextualize everything we look at. Even when looking at the Moon from the surface of the Earth, the Moon looks much larger when viewed low on a horizon that contains objects that our brain uses to interpret what we are looking at than it looks when high over head in a clear sky.

When we add cameras and lenses into the mix we must always include the effect of perspective when comparing sizes of objects in the foreground and objects far in the background.

If we take a photo of the moon with a wide angle cell phone camera lens close enough to another human to make them as large as the astronaut in your example photo, the Moon would appear to be almost as small as a single dot. On the other hand, if we use a very long lens and take a picture of the Moon behind a human a mile or so away, the Moon will look HUGE compared to the human.

Why is this? Because when we back up from five feet to five thousand feet we need to increase the magnification our lens provides by a factor of 1,000 to keep the human the same size. But if we back up from 250,000 miles to 250,001 miles from the Moon, we haven't affected the angular size of the Moon in the sky near as much as we have changed the angular size of our human friend that is now 1,000X smaller when 1,000X as far away. The moon would only be 1.000004X further at 250,001 miles than it was at 250,000 miles. If we increase our lens' magnification by 1,000X, the Moon will look 999.996X larger through the higher magnification lens when we are 5,280 feet further from the moon than when we are 5,280 feet closer with the wide angle lens!

In the case of the example photos, the lens used was a 60mm lens projecting an image onto a 70mm wide piece of film that used a 56x56 mm square for the image. With a diagonal of 79 millimeters, the 70mm film format has a "crop" factor of about 0.54X. In other words, the 60mm lens used on the Apollo Hasselblad 500 EL for the EVAs on the surface of the moon gave a similar angle of view to a 33mm lens on a 35mm film camera. If we crop a 35mm film negative to a square, though, the diagonal shrinks to about 34mm, which gives the 500 EL used on the Moon a diagonal right at 2.33 times what our 24x24 mm negative would have. So a 60mm lens on a 70mm Hasselblad 500 EL has about the same field of view as a 26mm lens would give on a square crop of a 35mm negative.

Looking and measuring alone would be difficult, a lot of the images as we know them were cropped by NASA, some were also edited to remove Reseau Crosses.

If you know which mission it is from then you can find out as the cameras and their use on the Apollo missions was documented in detail and is publicly available - for example: Apollo 11 Image Library

87
What is "angle of view" in photography?
12
What is the formula for percent of frame filled at a specific distance and focal length?
7
Can we measure size of an object using EXIF data from a photo?
3
How do I find the focal length when stitching images made with an unknown lens in Hugin?

29
What is the effect of a scratched lens?
14
Could my lens be damaged after being used as burning glass?
2
Does the higher price lens always reflect better quality regardless of it being 3rd party or not?
3
What type of wide-angled lens is the best option for photographing rooms in a hotel?
3
What is the useful range of apertures for lenses?
0
Is this attempt to make lens measurements and focal lengths more intuitive correct?
1
Is this vignetting from my zoom lens or something else?
1
What lens do I need to shoot this
1
What does make a vintage lens not sharp and can we fix it?