What is the effect of a scratched lens?

I have a lens with a small but significant looking scratch near the center. But I don't see any difference in the photos. Where does the imperfection show up? How important is it to get the piece of glass replaced? (It's a Panasonic 14-45mm micro 4/3 lens).

lens equipment-damage
Share
Improve this question
edited May 26 '11 at 18:38

Most of the time, the scratch will show up as a small and perhaps even unnoticeable amount of softening in the image. (It will largely be "outvoted" by the vast majority of the light, which is being focused properly.) In high contrast situations, though, or when the light is striking the lens directly, there may be a significant mount of flare washing out the image and reducing overall contrast.

The scratch will probably also make the lens element more fragile, so it will likely to be easier to crack that lens element if the lens is dropped or given a good bump -- that depends on the type of glass.

Fixing it isn't a critical emergency unless it interferes with the kinds of pictures you want to take, but if you plan to keep the lens for a long time, it would be a good idea to get it repaired at some point.

Not as much as you'd think:

Depends on the damage, and the aperture. That's the reason I stopped using UV filters; I'd rather get the best IQ possible and risk damage which can be ignored or fixed if required. Damage to your lens might affect the resale value; by the same token, as a buyer you could pick up a bargain.

Lens work surprisingly well with dirty or scratched front element. Here is a very good article about it, someone deliberately ruined a lens to test this effect. 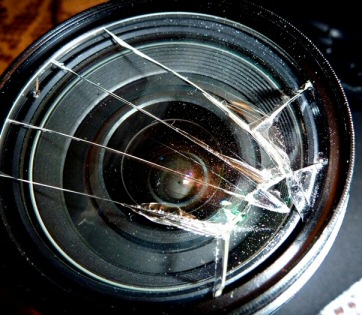 Probably you'll see problems with lens flare, but the biggest disadvantage is the resale value, it will be more difficult to sell a scratched lens.

One point that hasn't been made is that it's pretty inexpensive to fix the front element of a lens, usually in the realm of $200. It's not a huge concern in general, but it if you are serious, it's worth getting fixed.

A lens can take a surprisingly large amount of damage to it before it will greatly degrade an image. In the event that a favorite irreplaceable filter has gotten a small conchoidal fracture at the edge or a scratch in it, blacken that area with a fine-pointed sharpie pen, removing (rubbing away) any excess ink outside of the scratch or fracture, and this will minimize any contrast-loss that you might get from when it is illuminated by bright light. I always keep a fine-pointed sharpie and a larger black magic-marker in my camera bag. The latter for blackening cyclone-fence wiring or other metal-grids that I might have to shoot through. Blacking any small section of fence or enclosure wire that I have to shoot around/through makes it nearly completely disappear.

Not the answer you're looking for? Browse other questions tagged lens equipment-damage or ask your own question.

26
Is it safe to change the lens on my new DSLR?
1
How to prevent lens cap from being put on backwards?
0
What is the cause of these round spots on my photograph?
3
How will tiny scratches on rear element affect image quality?
2
What is cause of spots in image taken with dusty Nikkor AF-S DX 18-200mm ED VR II?

14
Could my lens be damaged after being used as burning glass?
44
What does the number of elements and groups in a lens mean?
3
Are these ghost light spots and vertical grain indication that my scratched polarizer is ruined?
1
Could a filter damage the curved front element of the Canon EF 100mm f/2.8 Macro USM?
9
Why are objects far away inverted through a lens but not through the viewfinder?
7
Lens with small scratches on the front element - how do they affect IQ?
3
How to clean shattered UV filter glass from Lens?
1
Do those photos show clear evidence of a dirty or damaged lens?
4
What kind of lens is used in this picture of Earth?
6
Does a large scratch in an ND filter affect image quality?