Is there a specific term for a tripod on wheels with handbrake in handle?

A while back, I used a tripod which was on wheels, but had a handbrake built into the handle which made it quick and painless to unlock, move, relock the tripod into place. Additionally, for video recording there was no bump in the video when unlocking\relocking the wheels.

Does anyone know what term is used to market tripod dollies with this feature or a similar one?

Such a heavy duty tripod is typically referred to as a camera pedestal.

The wheels can be rotated for turns or locked in a parallel position to track in a straight line across the studio floor. Further, they can be set and locked to trace a circle around a distant centre of rotation. They can be unlocked but control of three independent, freely revolving wheel makes smooth operation a challenge. As you mentioned, holding a shot when live, is easier if you frame, lock to hold the shot, unlock to reframe. It had to be done smoothly and the friction locks could be adjusted to accommodate this easily.

(We television camera operators would have contests to see who could negotiate an obstacle course in the studio made with folding chairs and lighting stands. Points deducted for poor framing, less than smooth movement, and slow timing, etc.)

Some had housings for use in a studio context and some were able to collapse for easier transport for field locations and used minus the trucks in a fixed position.

likely you are describing a Camera Dolly.

The pedestal tripod is used in TV production, you can touch the wheel to guide the camera or raise and lower it. A tripod with a hand crank might be a better buy for photography.

Those are intended to hold Teleprompters as well as a heavy camera and box lens. They offer precise crab and steer control from a central steering ring, and can be raised and lowered smoothly.

There are less expensive solutions, which mount to a tripod of your choice:

Now all you need is a tripod with a gear-driven crank that allows you to elevate the camera above the level that the telescoping legs allow. 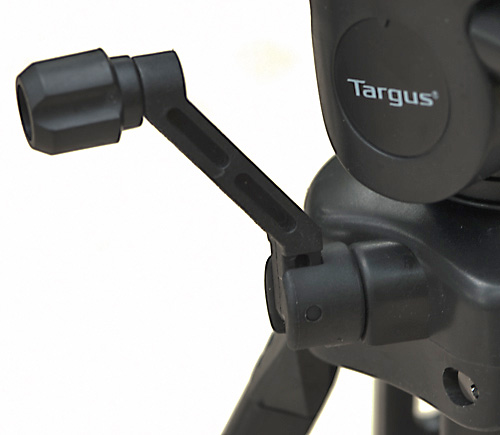 Not the answer you're looking for? Browse other questions tagged equipment-recommendation terminology tripod or ask your own question.

8
Which tripod can handle a lens that weighs more than 2 pounds?
7
Do they make a single-leg stabilizer, similar to a tripod but with only one leg?
3
Why doesn't my tripod ball head fit properly on the legs any more?
13
How can I prevent blurred images when using a tripod?
4
Is there a term for “not portrait” photos?
6
What features should I (as a beginner) look for in cameras to photograph esp. cities, landscapes, and night shots?
0
Quick release adapter with handle bar
2
Are there any cheap camera options for making timelapse videos?