I recently sold a Canon 70-200 f2.8 II IS on eBay. The seller requested a return claiming that the lens sufferes from astigmatism. Specifically that focus is faulty at apertures larger than 5.6. They sent me the following screenshot from diagnostics they performed using Reikan Focal software (please excuse the quality). 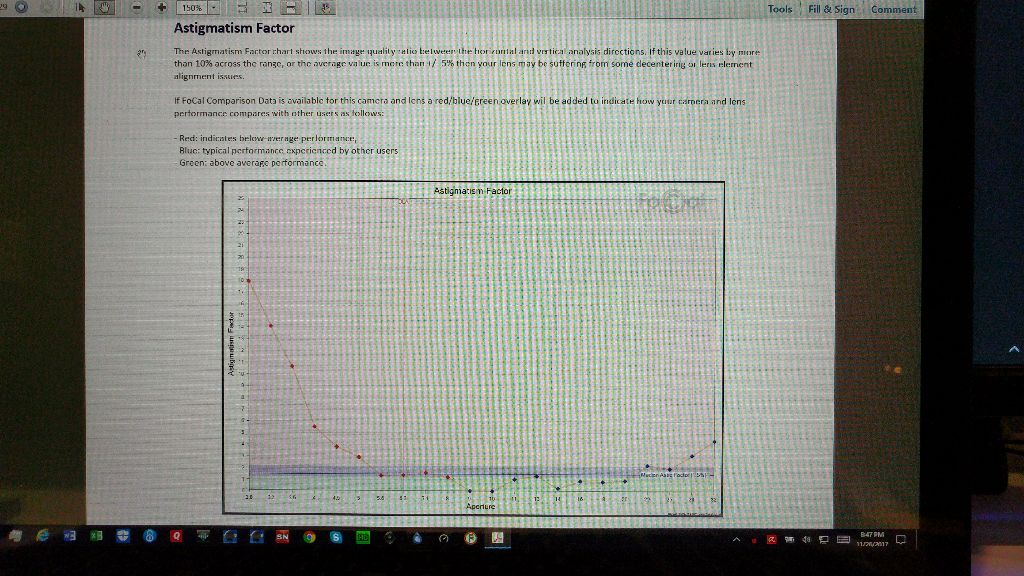 I had never noticed any faults with this lens in my own usage. Are these numbers unusual for this lens? If so, is there anyway of correcting these problems with calibration?

That looks fairly out of range to me. If you'll notice, the green area at the bottom of the chart is above average performance, the blue area is what most users of FoCal have reported for that lens, and the red areas are below average.

If you only had a couple of flyers just barely in the red area that would be one thing. But the amount on the chart below f/5.6 is fairly significant and gets progressively worse as the aperture is opened up. If the test was done properly, it does indicate an alignment issue with the lens.

On the other hand, if the camera and test chart were not properly aligned before the FoCal test was performed, the graph could be the result of a bit of tilt between the camera and chart, rather than because of a misaligned lens element.

Keep in mind that lens alignment issues can be the result of hard bumps. Even if the lens did not have the issue when it left your location, it could very well have been knocked out of alignment by the time your buyer received it. Roger Cicala at lensrentals.com has blogged about such issues in the past. He ought to know. His company probably ships about as many lenses per year as anyone.

I've had my EF 70-200mm f/2.8 L IS II since late summer of 2010. In 2013 it fell about 2 feet onto the ground in a grass covered field. The lens hood absorbed the brunt of the impact. After that I eventually started noticing a slight bit of tilt towards the left when shooting at wider apertures. One had to look at images very critically to see it. In 2016 it took an even harder fall with the main impact coming laterally to the side of the lens and the tilt got more severe in the same direction. With some images it was fairly obvious at normal display sizes that something wasn't right. I had a bona-fide 70-200mm f/2.8 tilt/shift lens stuck with full swing to the left! I tried shooting around it for a while but finally broke down and sent it to Canon Professional Services this past summer. When I got it back it was working like new again. With my Gold level CPS membership dues already paid for the year it cost me about $285 (including about $50 one-way shipping & insurance to Canon) for the repair. If you send a lens in for repair to Canon be very specific about what the problem is, include some sample images that demonstrate the problem, and include some sample images using another lens on the same camera body that don't show the same problem.

I don't know about this particular lens, but here's what I'd suggest: tell the buyer that you believe it to be in good working condition within reasonable specifications, but that if they don't agree, you need an unbiased third-party opinion. Have the buyer send it in to Canon for service and offer to take it back if it comes back as needing adjustment — but also make it clear that it's on the buyer if it comes back with a note saying that it's within tolerances.

Also, no help now, but in the future, make sure to hedge your promises in descriptions, and make clear that you're giving a good-faith non-technical assessment of what the condition appears to be but are selling as-is with no returns.

Not the answer you're looking for? Browse other questions tagged lens canon autofocus or ask your own question.