I am imaging a lot of old negatives.

You can invert the tone curve in lightroom and get a usable image, but having done so the sliders do not work as expected, some backwards, some just wacky.

You can also invert the tone curve in a DNG Camera Profile (if shooting the negatives raw), and it appears to do the same thing; specifically the sliders do not work properly.

You can invert the tone curve in Photoshop, and thus commit to a TIFF (or JPG) image for further editing, which does then allow the lightroom (or photoshop) editing controls to work as normal. Photoshop is also pretty good at removing color cast if you have neutral tones to sample with curves. THere is a lot of information along these lines in prior answers (e.g. starting here).

My question though is whether it is possible to keep the raw image and edit in Lightroom, but make the controls work "correctly", effectively to invert it transparently, as though one took it to photoshop and did the inversion, but somehow got it back as a raw. More specifically, can it be done somehow in the camera profile?

Inverting the tone curve in the profile does not achieve this (the sliders are still backwards). Could one somehow map all the colors to their inverses (perhaps even then correcting for color casts in some way)? You cannot do that in the editor, as it limits the distance you can drag a color, you cannot go to the opposite side of the wheel, but I do not know if one could manually (i.e. with a program) produce such an opposite profile?

I tried taking an image of a color chart, inverting that, and taking a photo of it to build a profile - the profile will not build (interestingly the Adobe editor opens this inverse image and MOSTLY corrects it to the right colors for display, inverting it itself; but it will not proceed with a profile).

Is there some manual way to build such a profile? Or would I be back to the same place as inverting the tone curve, that the sliders still do not work correctly, even if the profile resulted in a positive image?

I know this is a bit late, but I just stumbled across your question. With the recent updates to Lightroom, you can now build a profile to invert negatives and in many cases no further processing will be needed. But even with a film inversion profile, the sliders are still reversed. I do not think this will ever change because Adobe have explained that profiles are actually applied at the end of the image processing pipeline within Lightroom/Camera Raw. Even so, I have found that it is easy to adapt to the reversed sliders and the benefits of having RAW negatives color corrected in Lightroom is worth the inconvenience of working with reversed sliders.

I have written a detailed guide to creating film inversion profiles for Lightroom. https://www.cuchara.photography/blog/2018/5/one-click-inversion-of-color-film-negatives-in-lightroom

Here's an example before-and-after of an image inverted using a profile in Lightroom with no other adjustments. 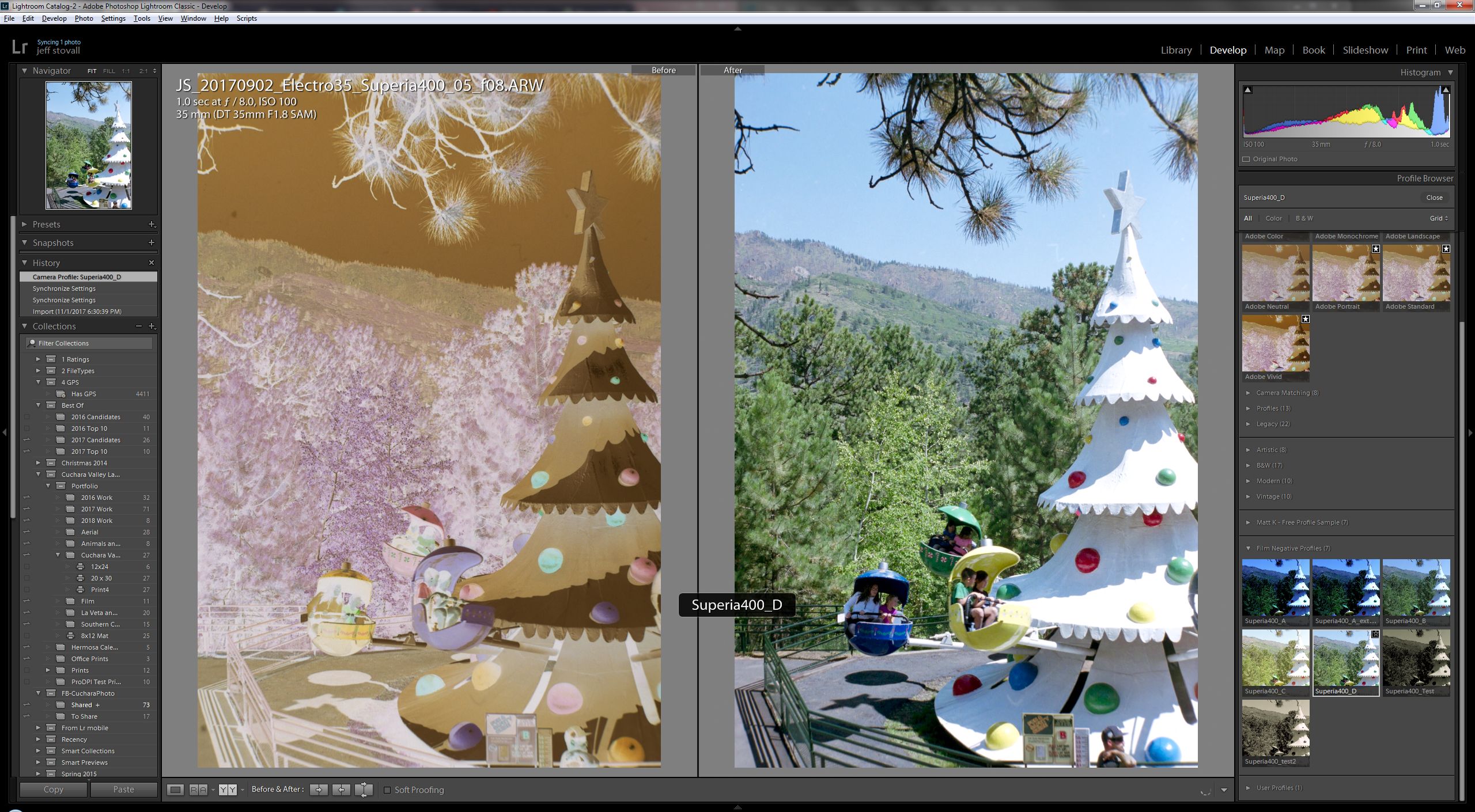 I've tried to find a solution for this in the past, and what I learned is that, no, there's nothing a user can do to achieve the result you're looking for. The functionality of the sliders is hard-coded to work with positive images.

It does seem like an unnecessary limitation, but we have to remember that LR is intended for use with digital images, so there is no need to support negative, from Adobe's point of view.

Not the answer you're looking for? Browse other questions tagged lightroom negative or ask your own question.

3
Is there any good method to invert a negative image (duplicated with a digital camera) in Lightroom?

6
Why do JPEGs only look right when exported from Lightroom in sRGB color space?
3
Is there any good method to invert a negative image (duplicated with a digital camera) in Lightroom?
4
How to invert color negative "scan" via DSLR without clipping the red channel?
2
Contrast order of operations in Lightroom?
2
How to handle the tone curve (linear/medium/high contrast) and the other development settings?
5
Why do colors in Photoshop look different from Lightroom?
2
What is the difference between Photoshop RGB Curve and Lightroom RGB Tone Curve?
5
Which camera profile to use with SpyderCheckr in Lightroom/Adobe Camera Raw for most accurate colors?