I'm trying to record a water droplet on a glass slide from the side and underneath angles simultaneously. How can this be achieved?

I'm trying to record water droplet impacts with a high speed camera. I would like to record the impact from the side and below (through the glass slide that the droplet hits). Due to lab constraints, only one camera is available. In my current setup detailed in the photo below, the glass slide intersects the image with a mirror stationed just below. However, due to the shallow depth of field and differences in path length, I've been unable to have both views in focus.

The goal is somewhat hard to explain so I've provided some crude drawings to explain the situation. The top half is what my original setup was and the bottom is what I want to see in the photo/video: 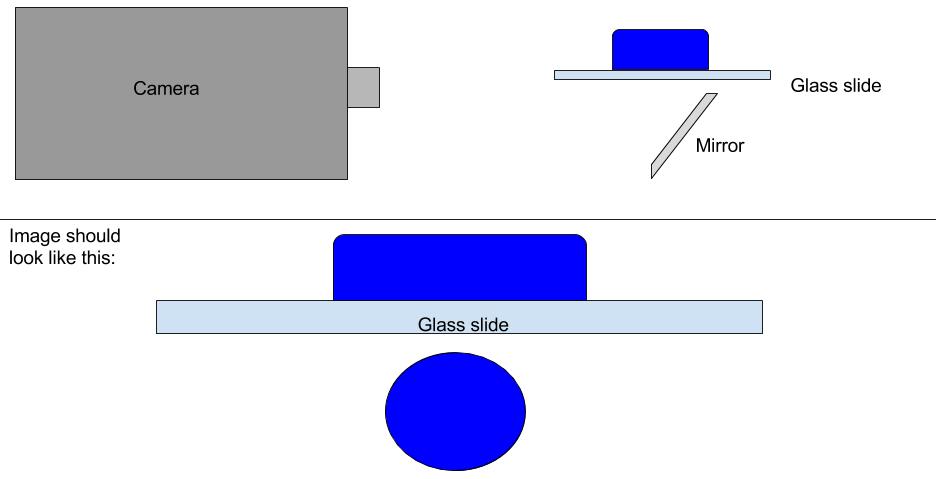 I understand this is fairly ambitious, any help is appreciated. Thanks.

The first is to use more mirrors such that the path lengths are much more similar, while hopefully not increasing the total by very much. Here's a sketch based on yours. The up and down parts of the extra path in the top beam are each half the lenth of the extra path distance in the bottom beam.

The second idea involves using a diverging lens in front of the camera lens for the mirror path only. In microscopy this is referred to as a Barlow lens (note that the term is used slightly differently when applied to telescopes).

This would need to be a weak negative lens, ideally an achromat but a meniscus lens might be enough. It would need to be mounted square to the optic axis quite near the existing lens and aligned in three dimensions, with a reasonable amount of travel in the focus direction. You may need to have the lens cut down to clear the path to the other image.

A "split field filter" (link to a Cokin product but I suggest a google search) would seem like a good idea, but I can only see +1 to +3, which are probably too strong. This is a little like a manufactured version of what I describe, but without all the adjustment. Also the filtered bit would have to go in the shorter path. The lack of translation along the optic axis means that tyou have little control over the distance ratio that's in focus.

A tilt-shift (or just tilt) lens is designed to do things like this. By introducing a slight angle between the lens and the camera the magnification and focus plane change across the image. The effect on the magnification may be tolerably small or calibrated away. This adjustment is normally built into the lens. I've seen various projects to add tilt to an existing lens, they all at as extension tubes as well, reducing the maximum focal distance.

These lenses are expensive, and because the effect is continuous you may struggle to get enough depth of focus within a given half-image

And there is always one more way take 2 shots ;)

I think you may be at the limit of diminishing returns. Short of getting a custom-ground meniscus lens to compensate for the different optical paths, the solution looks complex (read a few light-losing surfaces).

The way out of this box will be to use two cameras and synchronize the views electronically, after the shooting session. That will give you more flexibility for choosing optimal viewing and lighting angles for detail rendition. I realize this suggestion is a deal breaker; but, being realistic about getting the results you want doesn't preclude the possible necessity given your demands.

Avoiding spatters and spills can be easier with different camera angles because you do not need to compromise focus for accessability to the setup.

Synchronizing two high-speed cameras could also be a nightmare without some kind of a sync-generator. Some cameras have optional ability to be synchronized externally.

Not the answer you're looking for? Browse other questions tagged macro or ask your own question.