How to achieve a flash image with a very bright, almost-whited-out subject and dark background?

I want to achieve this strong flash yet balanced background, I've been trying a couple things out but I need some tips. 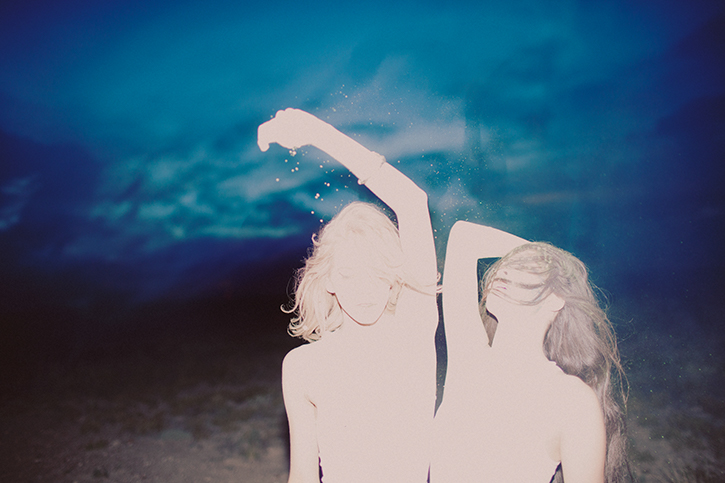 I know very little about flash in general, so any tips help! Thanks!

This is basically the exact opposite of the traditional white-background portrait, as described at How can I get a pure white background in studio photography?, or a modification of What do I need to get photos with a unifom black background? Once you understand those, this is relatively easy.

Raphael explains one possible model, but I think it's actually simpler than that. The ambient, natural light is such that at some reasonably fast shutter speed (¹⁄₁₀₀th or maybe a little faster) and a moderate-wide aperture, there's a dark blue sky and a largely black ground. So, there's no need for a trailing-sync exposure or for the subjects to move quickly.

There's a flash basically aligned with the camera and a little up; maybe even on-camera. It puts a huge amount of light on the relatively close subjects, and spills over to light the ground. You can see the shadow on the ground behind the anti-silhouettes, where they block that spill.

Then, there's probably some post-processing to adjust the curves to bring up the sky a bit (the "lumpy" look is indicative of trying to pull sky detail out of the shadows), and maybe also at the high end to make sure the whites are mostly clipped.

I'd first set my exposure for the background. Next, I'd set up the flash off camera and close to the subject for over exposure.

The important part is the flash is flagged or snooted so you can direct the light to fall on the subject without affecting the background.

Having the background or anything that can reflect light back a good distance away from the subject will help so any light spillage will have little effect on background exposure. Flash will eventually bounce off the background but by moving and directing the light you can allow this to happen outside of the frame and not affect the final image.

In just my opinion:

1) The ambient looks like it is very dark; the clouds looks blurry.

2) Overexpose the flash probably 2 steps. If you can not overexpose more than 2 steps you would need an external one.

3) Shoot the persons and they need to move fast from the place after the flash.

4) I think the ambient is very low light because you can't see trails of they moving, so I think they moved away.

5) This also means that the time to expose the landscape is probably around some seconds... Five? ten? It is hard to know for sure.

Use in a low light environment Aperture priority. Put the camera on a tripod, and overexpose a flash.

Not the answer you're looking for? Browse other questions tagged flash lighting or ask your own question.

34
What do I need to get photos with a unifom black background (not with post)?
7
How can I get a pure white background in studio photography?
1
How can I get this “brushed background” but clear subject effect by manipulating film negatives?

4
How differently should I use a flash with film camera?
1
photo using no flash
4
How can I blow out the background when shooting down for clothing on the ground?
2
How to take product shots on a green screen background?
4
Why do pictures turn out dark when I shoot with my external flash?
2
How do I calculate what aperture and shutter speed to use in M mode with my DSLR's pop-up flash?
3
How do I reproduce this dark background on this photo?
8
Corporate Portraiture Advice
5
How to light and use flash in large rooms with dark ceiling and colored walls?