How to remove oil from aperture blades?

If you go on ebay or other second hand places, you'll see a fair amount of lenses that have oil on the aperture (particularly on older lenses).

I've done some reading and it looks like this oil is from the lens barrel and when heated up escapes onto the blades.

In fact, I had to return a lens as a result because the automatic aperture was just way to slow, even in manual mode.

I've also read that you can carefully remove the oil using a Q-Tip and rubbing alcohol.

As Hugo says, the amount of effort required to get at the aperture blades varies hugely from lens to lens, with more modern lenses (i.e. autofocus) being typically somewhat more difficult than (for example) most large format lenses, which often don't even require tools.

However, to answer your question directly you can often (depending on the lens) do a quick and dodgy clean of oily aperture blades with a clean lens tissue and isopropyl alcohol (avoid q-tips; too many fibres end up on the aperture blades). To do this, fold the lens tissue into a small rectangle, tear one edge to act as a 'mop'. Put a few drops of alcohol on the torn edge, then very carefully drag it in a circular motion around the surface of the closed aperture blades. Use a similar process with a dry tissue to soak up the oily alcohol off the wet blades before it dries. The result will be slightly cleaner, albeit smeary aperture blades.

Note: This is a risky process and you can easily get oil on other surfaces in the lens, as well as dislodging aperture blades, which then require a lot more effort to reposition.

A proper clean would be done by removing the blades, washing/drying them and reassembling.

Also; the type of aperture affects the difficulty, with simple 2-blade square apertures being simple and 20+ blade complicated apertures like this one from an Apo-Ronar being quite tricky to get back together again: 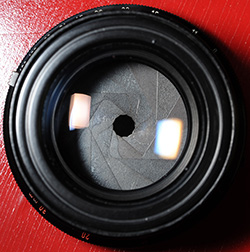 And; oily aperture blades don't often actually cause any issues unless:

I've cleaned up oil on the aperture blades of an old 50mm nikon RF (Range Finder) lens, some blades were stuck together and the aperture was no more circular. The lens was restored to a normal condition and I took the opportunity to clean up the inner lens elements. I'll talk about this lens, other lenses may be trickier to deal with.

It is tedious, but I wouldn't rate it as very difficult. You have to be armed with patience, and be ready to disassemble and reassemble delicate parts.

Work in a clean and as dust free environment as possible! Bathroom is usually the least dusty environment in a house. If you have an air cleaner, turn it on in advance. 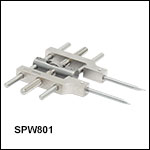 adjustable spanner for opening the lens (here from Thorlabs)

Depending on the lens, the diaphragm may be located closer to the front or the back of the lens. In my case it was accessible from the front of the lens.

There are some screws on the outer body of the lens toward the front, you will have to remove those so that a kind of shell can be removed.

Unscrew the front lens element with the adjustable spanner, in my lens there was another lens element (an achromatic doublet, 2 lens elements, in this case, glued together) to be removed as well. Note the orientation of the lens elements (the front and back surface curvatures are likely different).

I then could see the actual leaves of the diaphragm. Using tweezers I've removed the whole aperture, and then proceeded to cleaning each one individually with a clean lint free cloth. I didn't use any cleaning liquid so that a very thin film of oil would remain on the blades.

Some photos of the process:

The aperture diaphragm as it originally was, that is out of shape. 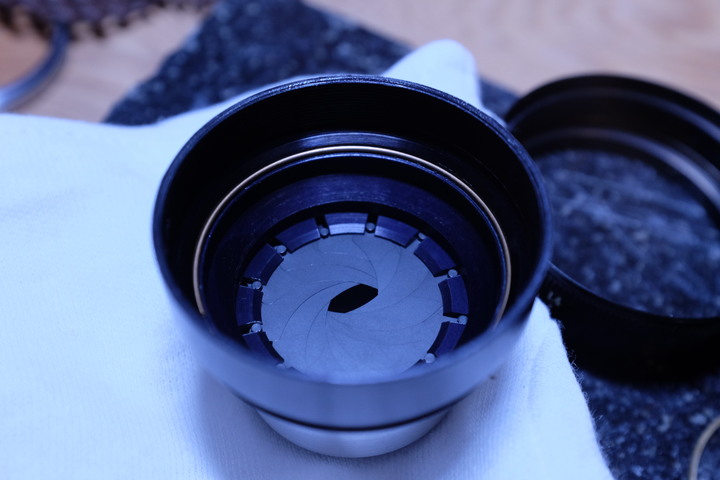 The blades and rotating ring with spigots. 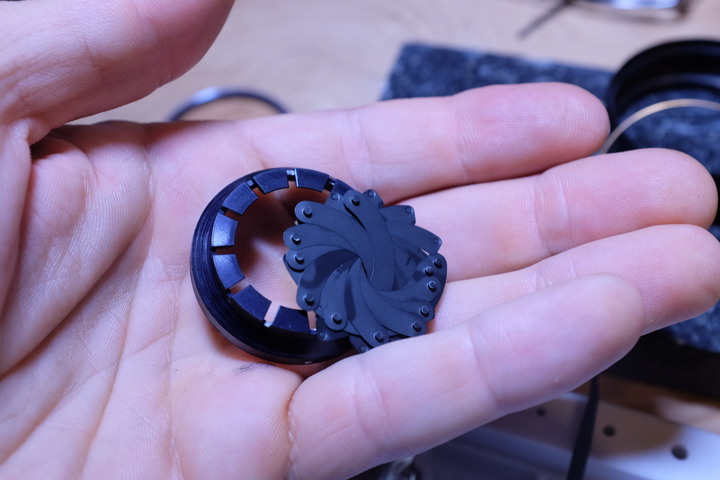 You then proceed to the reassembly, one blade at a time. 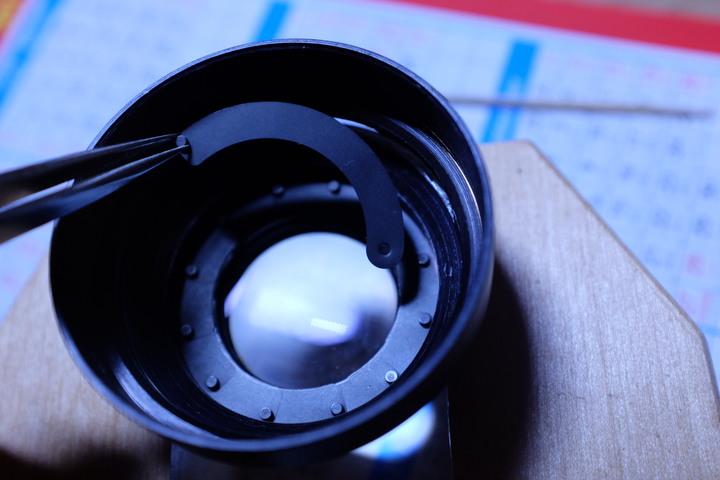 Remember to take photos of each steps, especially when you reach and remove the aperture.

Now: as mentioned in another answer, the difficulty is of another order with modern lenses. I've disassembled a damaged canon lens from a friend and many parts were glued and unaccessible.

Over the years I've done five.

400mm f6.3 M42 Tokina telephoto whose aperture mechanism was seized up, with some of its blades buckled.

Pentax Takumar 55mm f1.8 M42 that someone must have treated with WD40 or similar before putting it on eBay. I only noticed when the internal lens surfaces adjacent to the aperture mechanism became coated with oil droplets shed by the aperture blades.

A Jessops 50 mm f1.7 in K-mount that had probably been dropped.

Pentax M 50mm f2 in Pentax K-mount that had probably been dropped.

A Chinon 50mm f1.4 Pentax K mount, with visible oil on the blades that slowed the stopping down when exposing to an extent that meant the lens could only be used wide open.

I undid all the screws I could see on the Tokina, and it all came apart. I have the illustrated tool and used Phillips screw drivers, though they aren't quite the right size. The root cause seemed to be grease that had escaped from the focusing helicoid and solidified. Then one of the leaf spigots had come adrift and the floating leaf caused the pile-up and further buckling. After an abortive attempt to solder the spigot back in, I reassembled the mechanism leaving this leaf out. One leaf out of a dozen was neither here nor there.

I used threadlock on the screws when I reassembled. I think this is important. The lens felt much more solid when I got it back together. It still works well.

All the glass elements in the Takumar are individually mounted. I unscrewed everything from the front and the back to get them out. Then I soaked the lens body (obviously including the aperture mechanism) in petrol for a couple of days. It stank of petrol for further days after I took it out, but after further days the smell had gone, and I reassembled it. The focusing isn't very smooth, but the lens does work.

The Jessops and the Pentax M were easier. Getting the front elements out gave access to the aperture mechanism, and I was able to get them working. They still work.

The Chinon fix has been the least successful, because I was much less patient. I removed the rear elements easily enough (you don't have the modesty plate issue you tend to have at the front), and that gave me access to one side of the aperture mechanism only. I used lens tissue and xylene to dilute and then mop up the oil from one side only. The excess xylene (paint thinner) evaporates, and in no time at all the aperture mechanism was working fine. However, after a few years the oil is back, and I am going to have to repeat the exercise :(

Don't touch, my friend! I've spent over thirty years learning my trade and I'm still learning. Would you dismantle your 2017 Toyota Prius hybrid or (if you're lucky) your Tesla with a half-inch spanner and a prayer? Send it to the professionals. The tools alone will cost you more than the lens is worth. And if it's something with 15-18 or more blades there's about the same number of people in the world that can do this. Trust me on that. I have 35 years in diesel engine refinishing and rebuilding, marine, HGV, and associated systems engineering :)

Not the answer you're looking for? Browse other questions tagged lens aperture equipment-damage cleaning vintage or ask your own question.

2
What are these colored streaks in the front element of my lense?
0
How to stop oil from returning after cleaning aperture blades?

9
How to clean a lens cover?
15
How do I to clean prime lenses' internals? Or should I even try?
3
What to do with 2nd hand sale of a lens showing oil/moisture coming out of the focus ring?
2
Why does oil leak from the aperture ring of old lenses?
0
Nikon Lens - Stopping down causes over exposure in Aperture Priority mode
6
How can I remove mold from the outside of a DSLR body?
4
No1 Pocket Kodak aperture 1 to 4, f stop equivalent?
0
How to stop oil from returning after cleaning aperture blades?
1
FD lens aperture is slow
2
Aperture Doesn't Change on Nikon D7000 1.8D (Already set ring to 22)