Are there any 'panoramic' digital cameras?

I found a picture of this camera, a Horizon S3 U-500, (I've personally never seen anything like it before) and did some research. It turns out its a specially designed camera to take wide (but not distorted) panoramic shots on film.

I'm wondering if there's any kind of digital camera that can do this with more consistent results. Examples I've seen seem to be fairly inconsistent in quality but that could just be operator error.

Additionally; I don't quite understand how this camera works so if anyone could explain it'd be much appreciated. 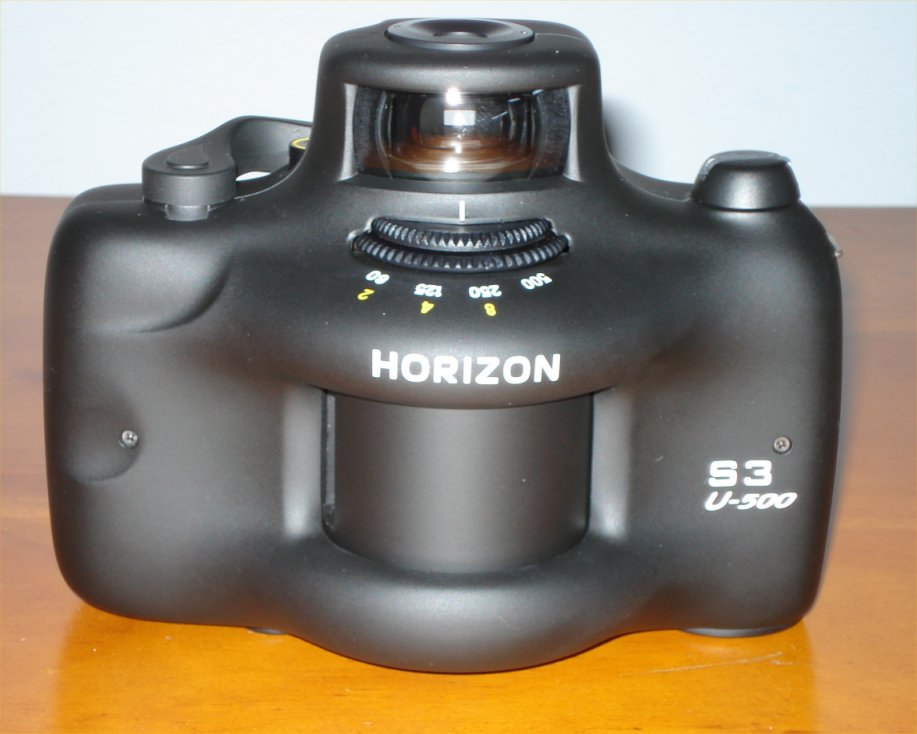 I believe the Horizon camera is an example of a slit-scanning camera. During the exposure, the lens assembly rotates from one end of the panoramic field to the other. A narrow slit is used to ensure that only a thin line of film is being exposed at any instant. The result is that the whole image is exposed using the center of the lens, which can form a high-quality image, and you don't get distortion, which is typical on very wide-angle lenses. The scanning method also results in a cylindrical projection, which may be more suitable than the rectilinear or fisheye projections you get from camera lenses on an ordinary camera. (Rectilinear and fisheye lenses can really stretch people in unattractive ways, so slit-scan cameras were great for photographing crowds of people.)

One example of a digital scanning panoramic camera is the Panoscan, which takes medium-format lenses, and scans mechanically to create an image using a trilinear CCD (one column of pixels in each of red, green, and blue) to form an image.

The Horizon camera rotates the lens, which is mounted in a vertical cylinder, around its nodal point. Actually the cylinder is the rotating part, and the lens turns with the cylinder. Image is projected on a film that is not on flat surface as in normal film cameras, but on a curved film plane. The film is not exposed all at once, but instead the turning cylinder has only a narrow slit open on the film and the film is exposed thru the slit while the cylinder rotates. A picture to demonstrate this: 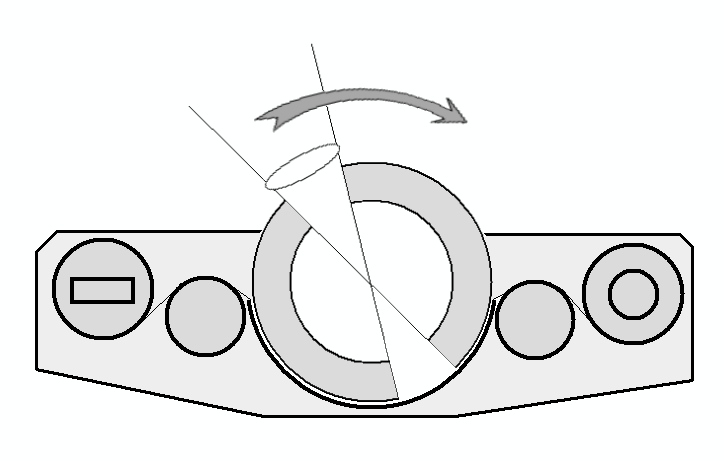 More about panoramic photography in Wikipedia, with example photos.

I have no knowledge of similar digi-cameras. Most likely there is not a digital version of this type, since it should be too much fun to engineer a digital image sensor to the curved shape.

I believe the only true panoramic digital camera available (when i say true, i mean 6x17 and unstitched photos) is the seitz 6x17 digital...

it's über expensive but i hope this helps.

It appears that they are using a moving lens that exposes part of the film at any given moment.

I'm not sure if there are any digital camera equivalents, though I'm not sure that you wouldn't get better quality results by taking multiple photos and stitching them together. This is what most photographers I know do and since it is easy digitally, it really reduces the demand for such hardware, so it's probably pretty unlikely unless someone made a lens for a typical SLR to do it.

Update, some quick Googling confirms there are actually digital panoramic cameras available even though I've never seen one in use. They however appear to be extremely expensive specialized devices such as the Seitz-D3.

The problem with stitching or indeed even sweep panoramas is that it doesn't give you the same speed as a rotating lens camera like this. Looking around the net most people who still use these kinds of cameras do so for street photography.

I don't think its been officially released yet(might never be) but Horizon themselves have been showing a digital panoramic camera for a few years that uses 3 lens/sensor units to take pics at the same time ala "bullet time" matrix cameras that can then be merged into one shot.

I believe the Horizon is still available.

Any digital camera could do pretty much the same thing with the aid of good stitching tools. PTGui or Panorama Studio comes to my mind. But there are much more and some of them are really good, though some are crap.

Don't use AWB, use a fix white balance for all images. Or use RAW and care for the white blance later.

Use the same settings for all images. Use the M program and avoid Auto-ISO. When the situation is difficult then meter all directions first, use some values between the maximum and minimum and try them. Again, RAW is helpful here. Then shoot all of the images with the same settings.

Not the answer you're looking for? Browse other questions tagged equipment-recommendation panorama or ask your own question.

10
What are Barrel and Pincushion distortion and how are they corrected?