I am about to buy a fun super-zoom mirror lens which is so long it has its own tripod mount. To protect the camera, I am wondering if there is a mount accessory which will allow for two items to be attached to the same tripod (lens & camera), in sort of a reverse-fork operation.

I found this question, which seems to be similar, but not exact. Specifically, in the poster's case, only the camera+lens is (presumably) being mounted, and they were satisfied letting the camera hang off.

However, in my setup, I will be adding a 2x teleconverter to the mix. Coupled with my V1, which will require the FT-1 adapter to work with F-mount lenses, and the T-ring to attach this behemoth of a lens to the F-mount, overall I'm looking at 5 separate components extending nearly 2 feet at full zoom. I am not comfortable placing that kind of torque stress on the connections.

So my question is, again, if there is anything which fills the role of a dual mount?

This item seems like it might work, except it's clearly intended for parallel mounting of 2 cameras, not co-linear mounting. Logically, I can see how this could be a problem because (correct me if there is some standard engineered dimension out there) each of the 2 mounts could have a different "height" from the long axis, that is to say a different distance from the mounting plane.

Not sure how best to support this beast, but it must be tripod'ed - not only is the final 7020mm focal length not manageable "by hand", but I'm doing some lunar photography and it needs to be sitting still.

What I Would Make

You know what you want. A bar that has a slide mount tripod plate on one side, and two screw mounts on the other, one of which is adjustable height.

Sounds like a chunk of t-slot bar would be ideal. To make the vertical risers two angle brackets and a chunk of the t-slot can be used. This plan will require a drill and a hack saw. When ordering the T-slot bar, aluminum angle brackets, screws, and t-slot screw anchors can be ordered as well.

Make sure that all parts are aluminum or stainless steel (Again, mostly looks, but you never know what bad things happen when rust shows up). 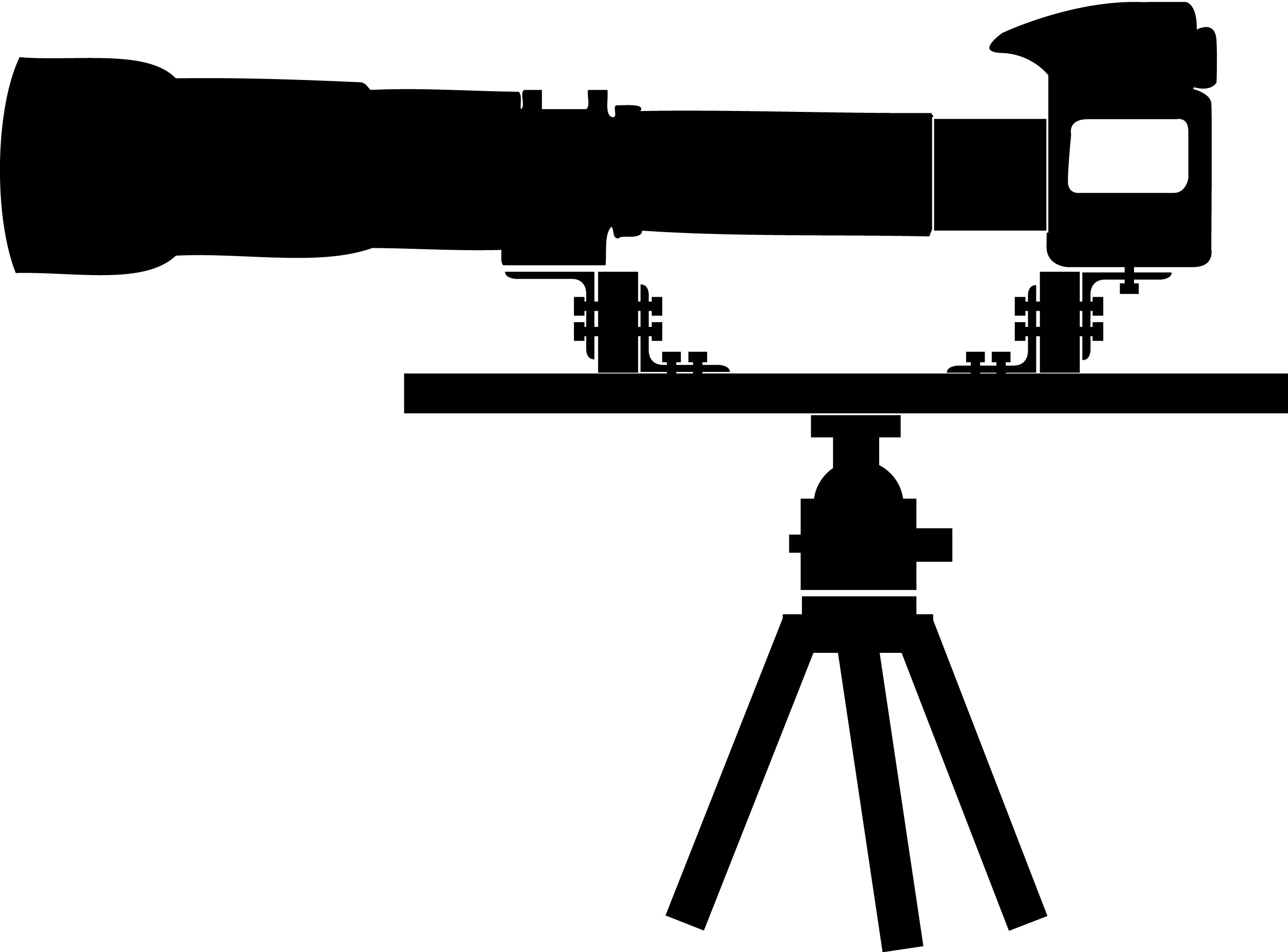 What Could be Bought

Really Right Stuff sells a 'Kennan-Ward-Super-Tele-Package' which looks like it is meant for this situation. IT is $400.

UPDATE: What I Ended Up Doing

I hope it's not against decorum for me to edit your answer so extensively, Phil. I was going to edit my original question but since so much of my solution is derived from your (correct) answer, it seems in spirit to better belong here.

I originally avoided this answer because it would involve "a drill and a hack saw", as I wanted to simply buy something or perhaps assemble parts. But a few days later I was cruising some results while searching for "slotted bars" and found this, a very-cool, DIY camera shoulder mount. It looked sleek, ergonomic, and was using off-the-shelf parts. While reading that it was based on a modular "t-slot bar" system, I wondered how that would compare to the answer above, whereupon I discovered - to my amazement - that Phil had been recommending a "t-slot bar" all along! It was right there under my nose! What was missing for me was an example to make it seem concrete, real, and - most of all - doable.

I spent the next few days perusing the catalogs of various manufacturers and distributors of products for this system. Incredibly, this family of products is a well-defined and rigorously-obeyed standard, and there are hundreds of components to choose from. They are like adult legos (albeit expensive legos), and in fact one company (the one I ended up buying from), 80/20, bills itself as "the industrial erector set".

My design drifted from the raw concept above in 3 key ways:

The 1.0 version features a single 2-foot t-slot bar (1" in 'diameter'), with 3 "linear brake" pads mounted on it. To these are bolted corner brackets and finally Manfrotto quick release plates. Everything is 1/4-20 thread and either available at any hardware store or via 80/20's ebay discount bin, where I picked up all this stuff for about $150 after shipping.

So, how does it compare? For one, given the length of this system, none of the commercial examples would support it. Given that my final solution is both cheaper (not including my labor) and more robust (in terms of strength and flexibility), this triple-whammy excludes the commercial products completely and without apprehension or reserve.

Here are shots of the dual mount, the camera gear, the entire setup, and finally a test image. If you examine the base image carefully you can see a tiny red square which is the FoV of the second, tele-tele-tele-photo'ed image. I haven't done the math on the AoV yet but I know it's dramatically in excess of the 7020mm projected given the use of the extension tube set, probably again by double (14000mm, anyone?).

I will be posting some photos from the intended use (lunar photography) tomorrow. 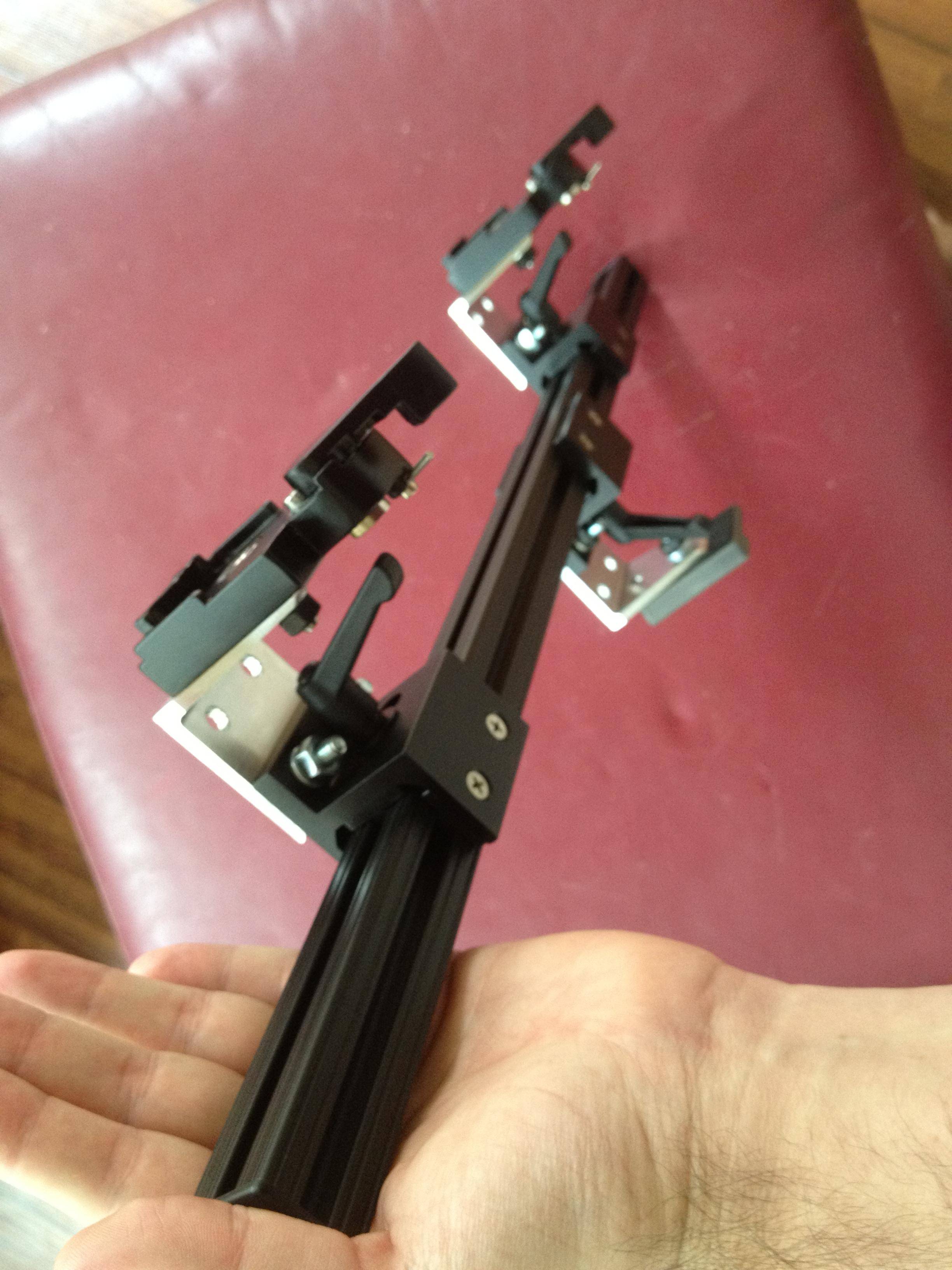 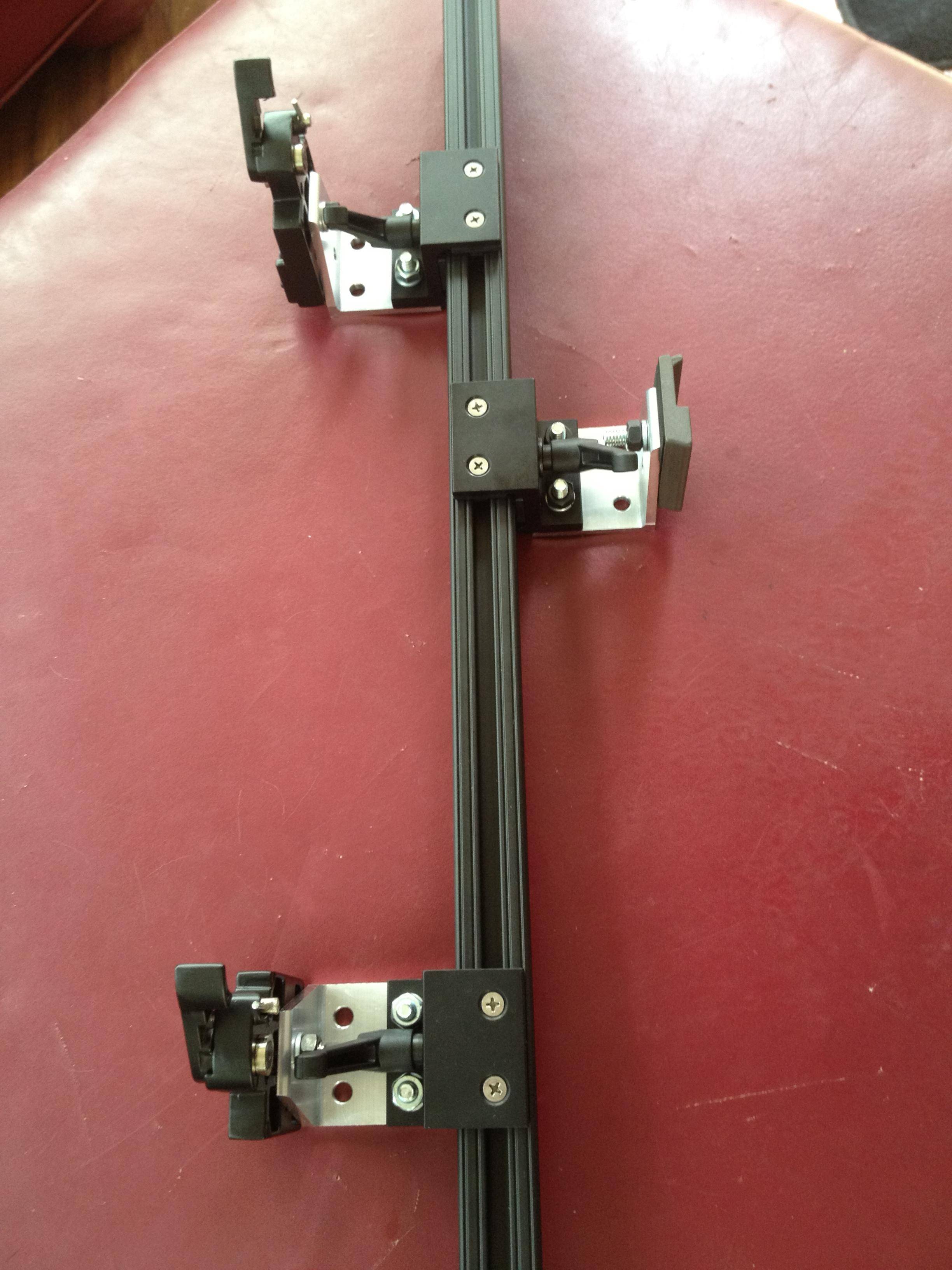 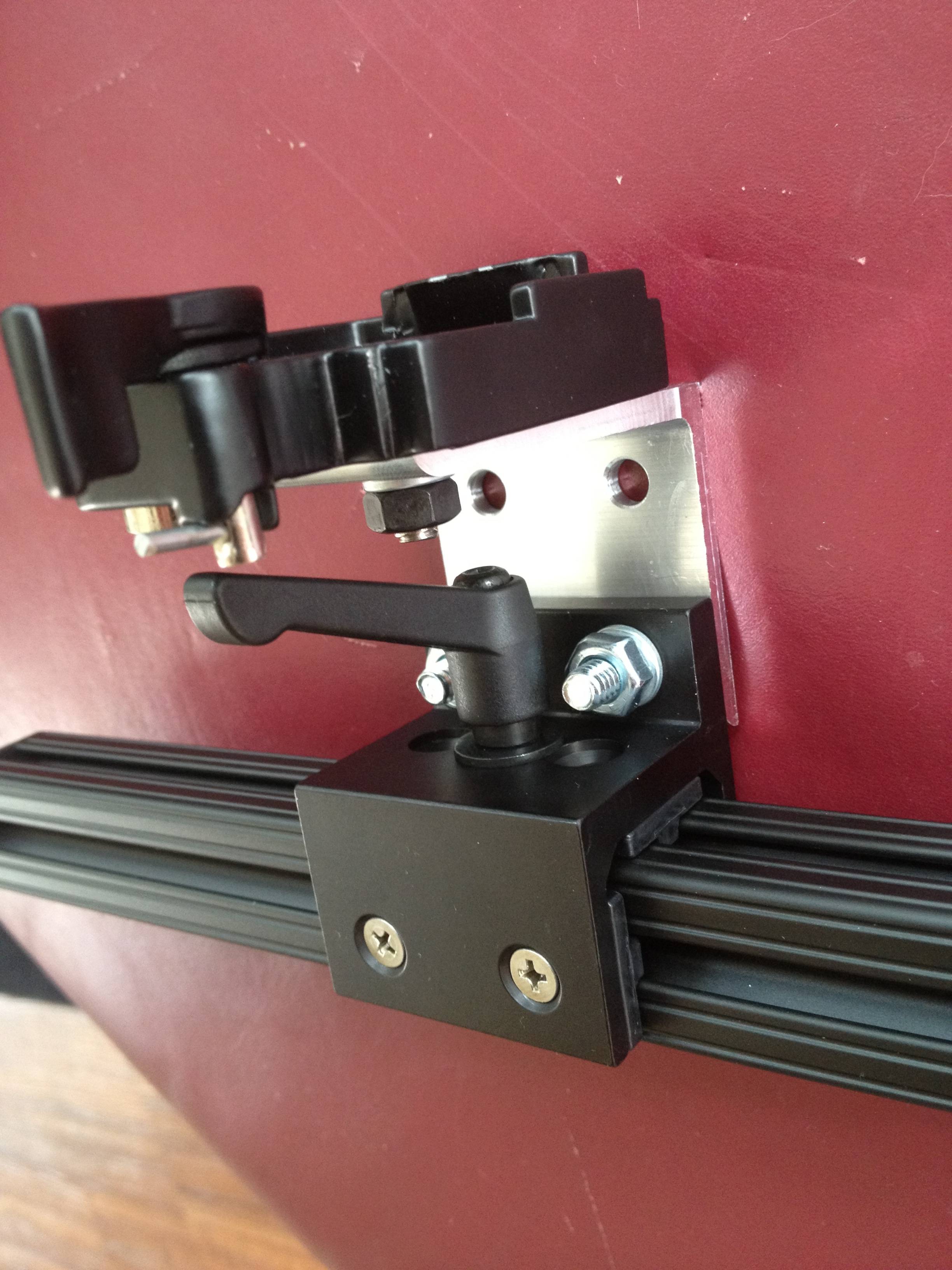 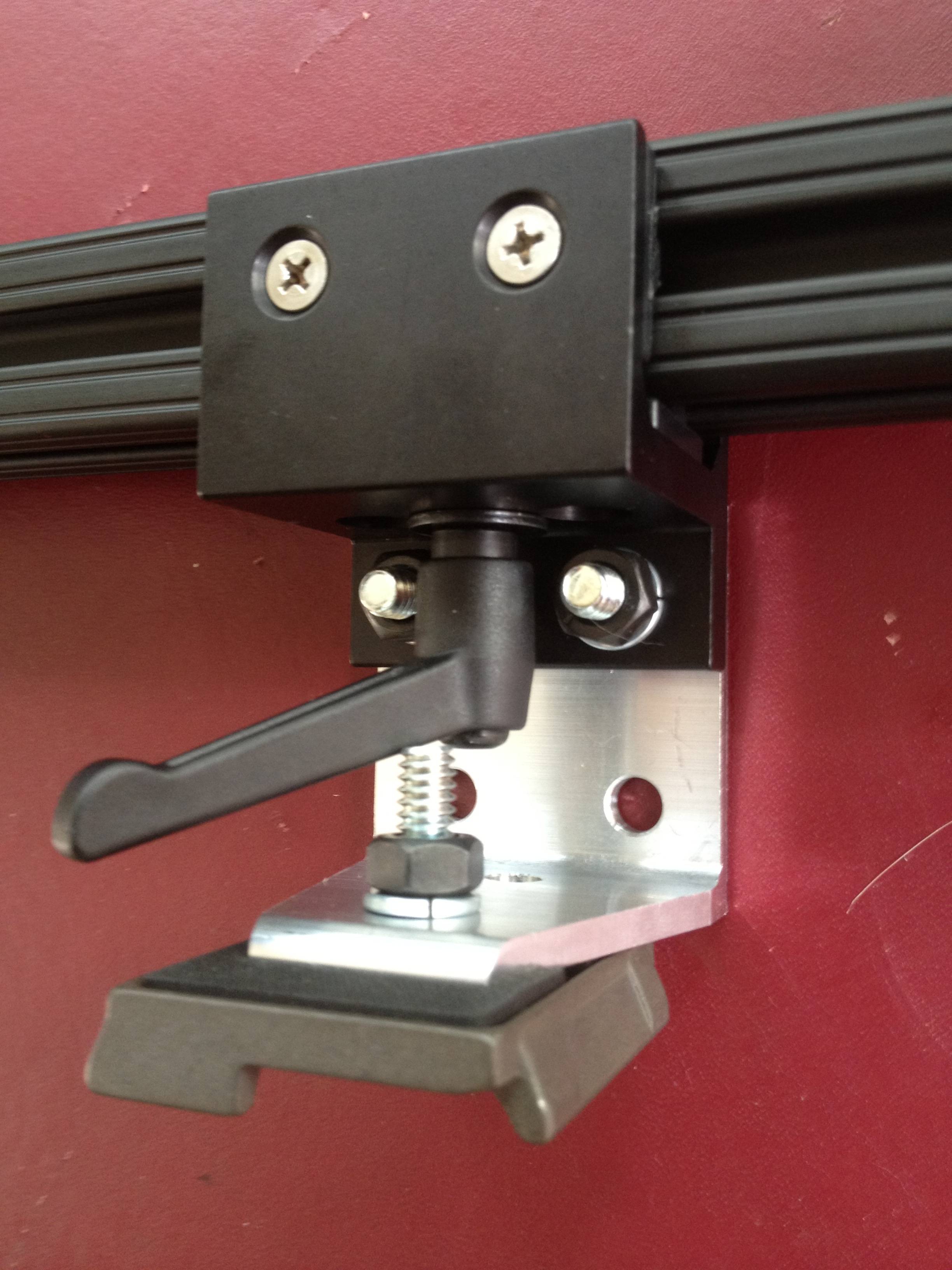 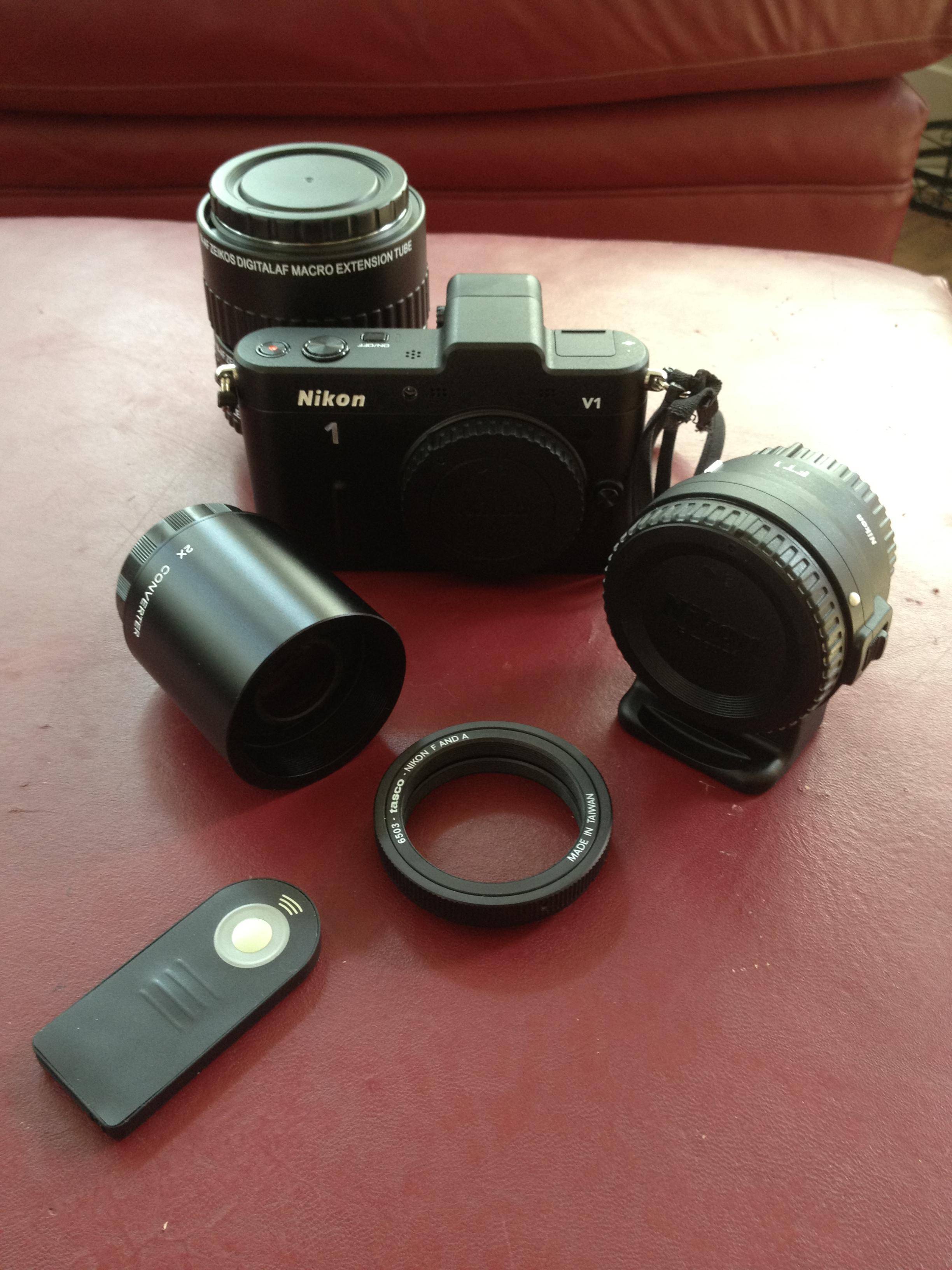 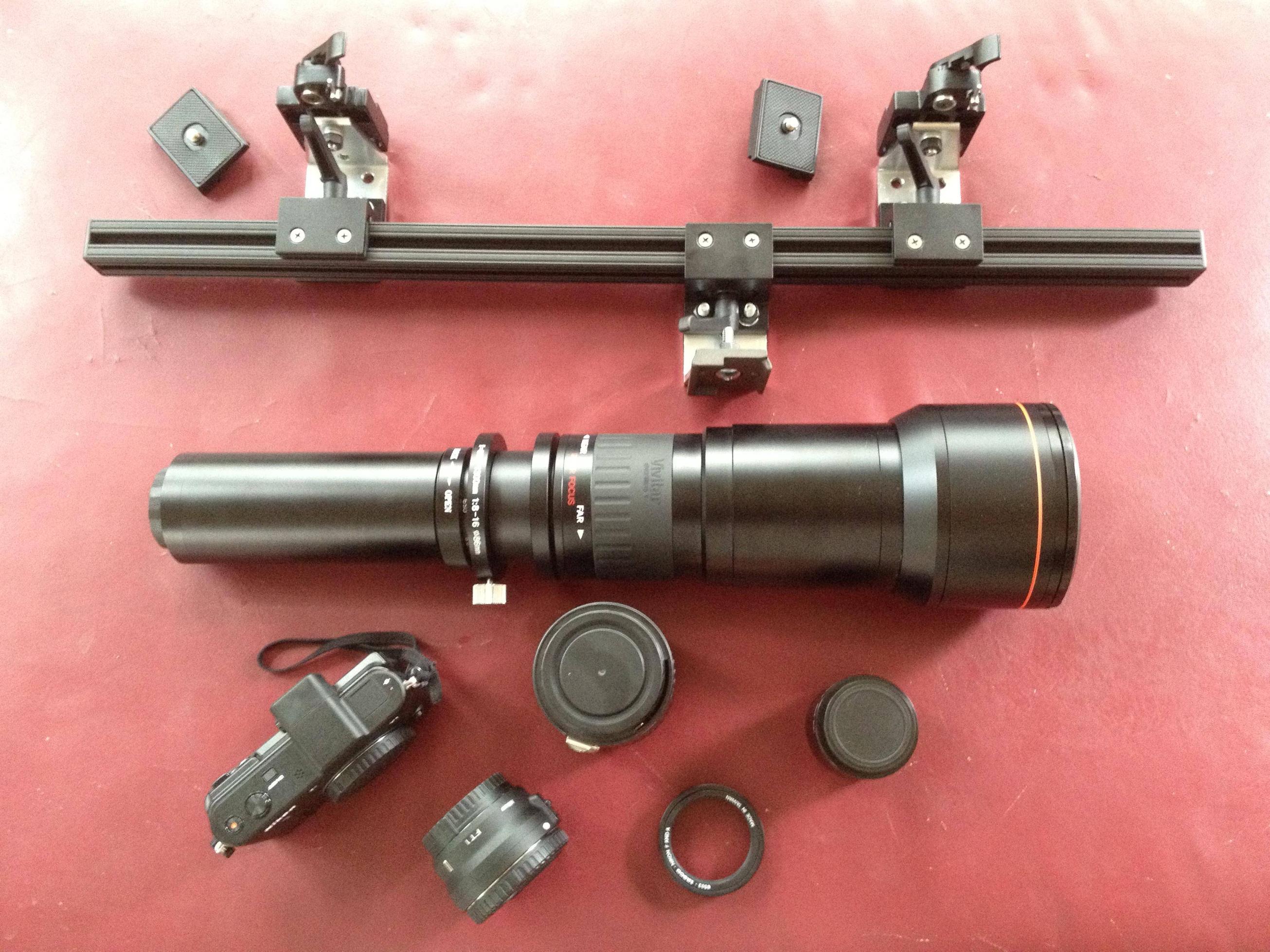 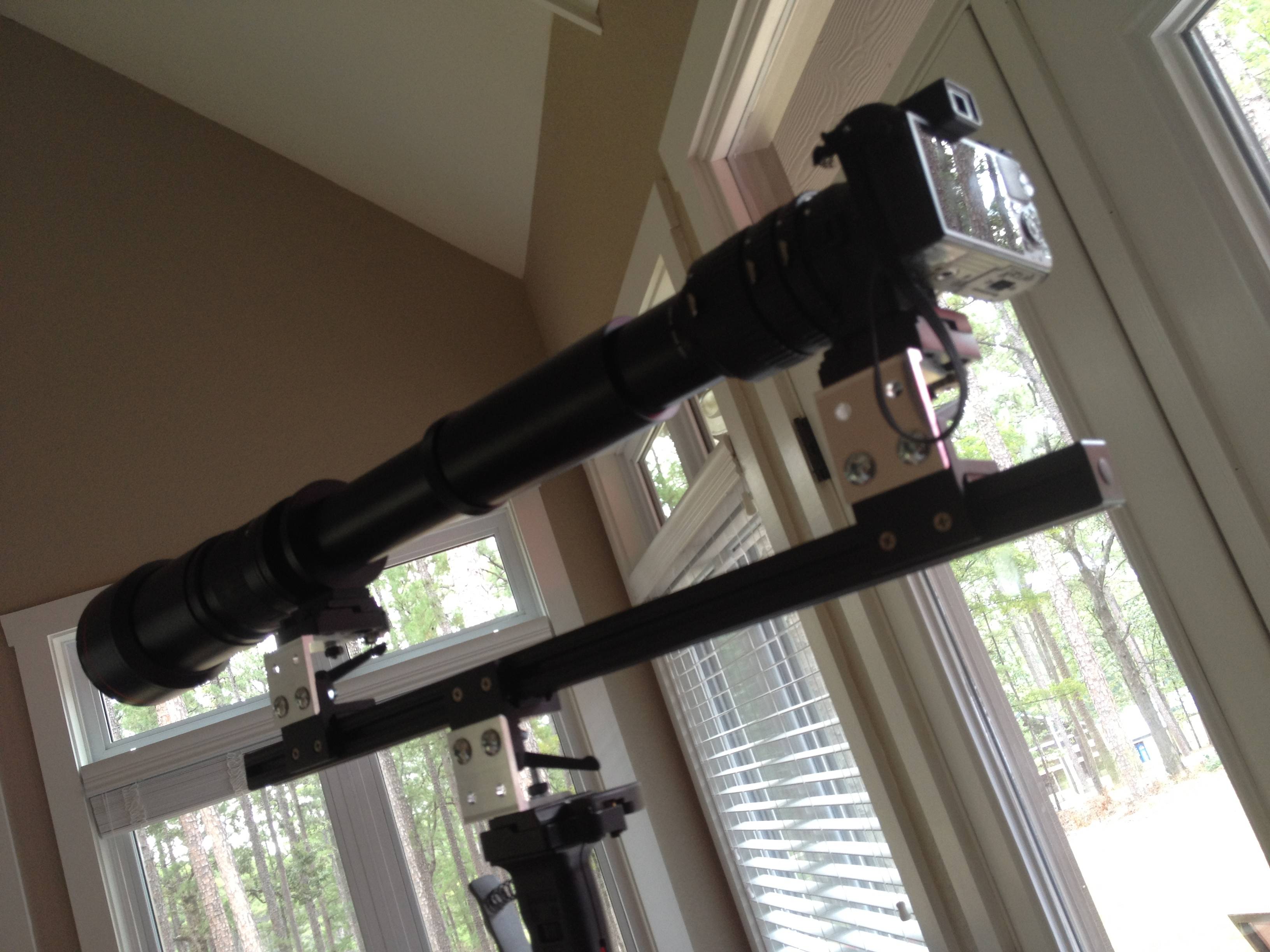 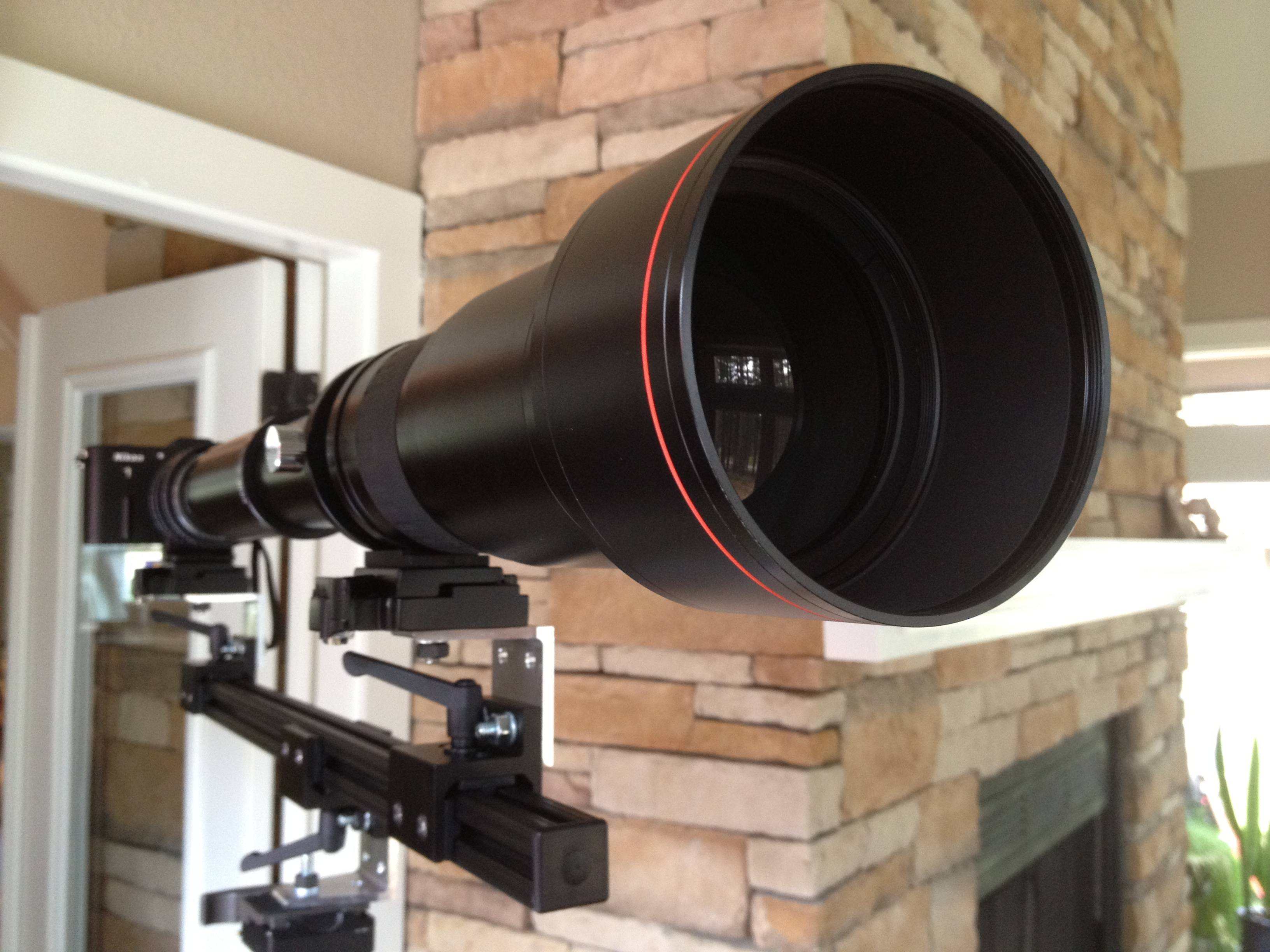 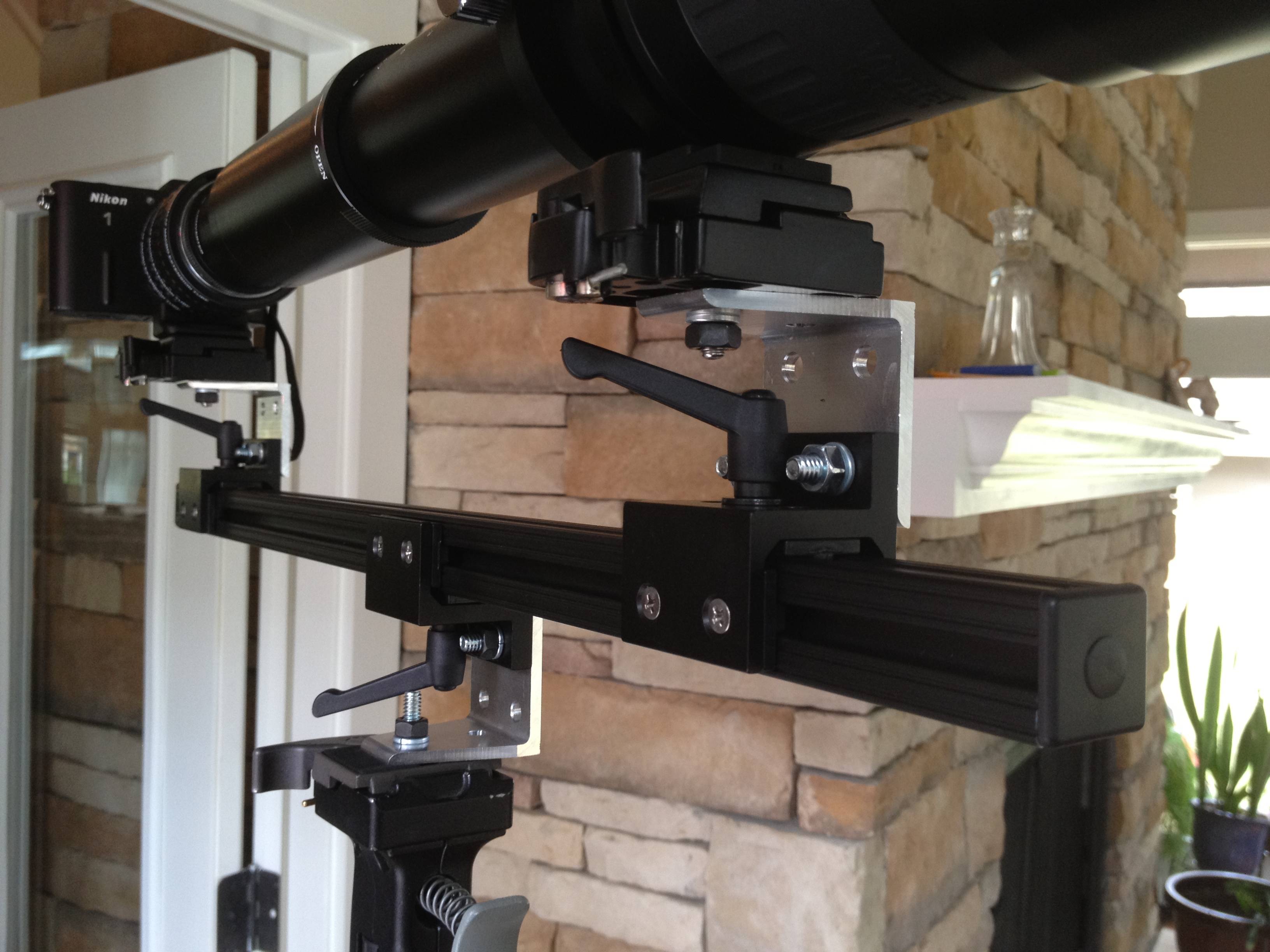 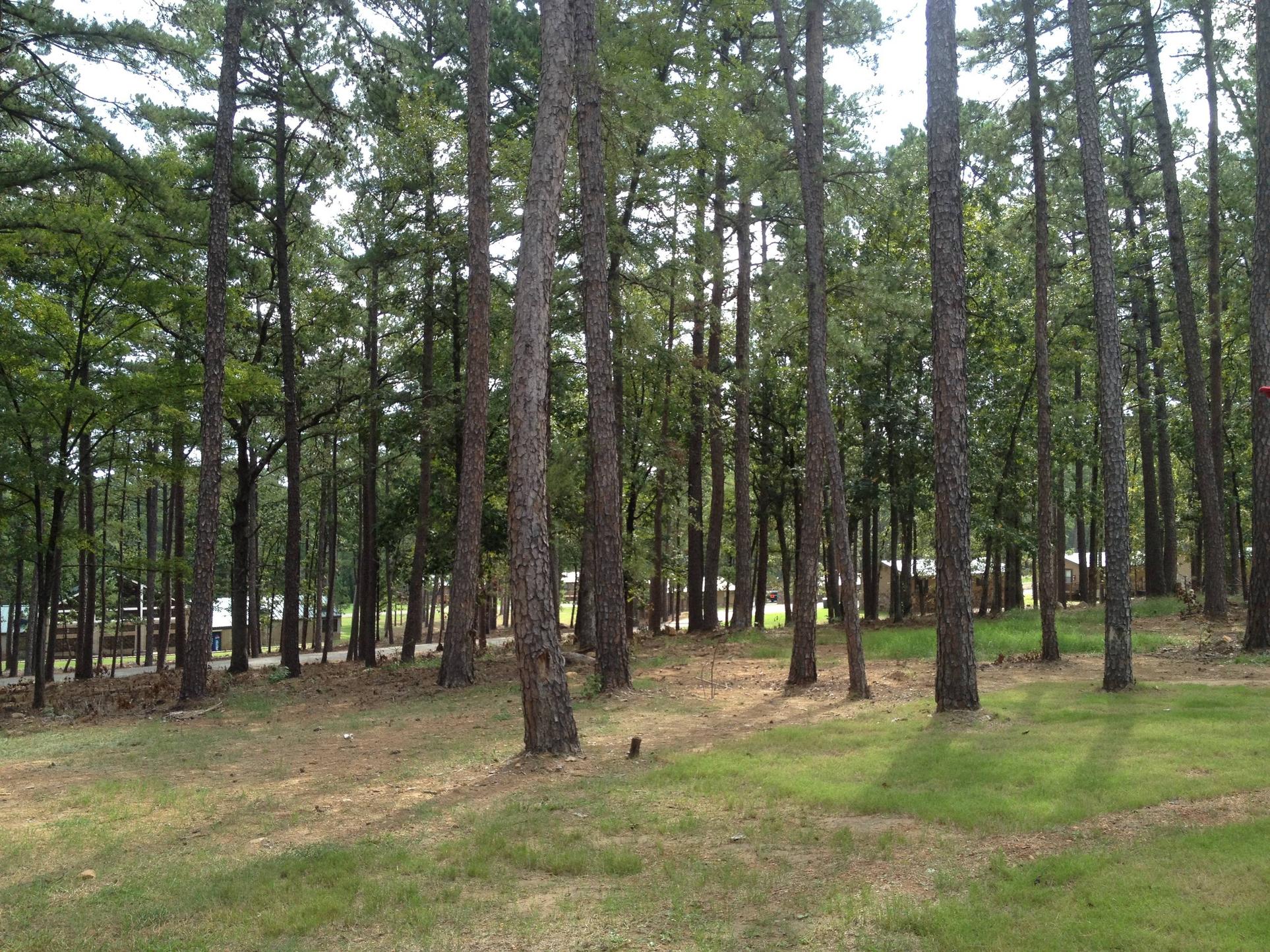 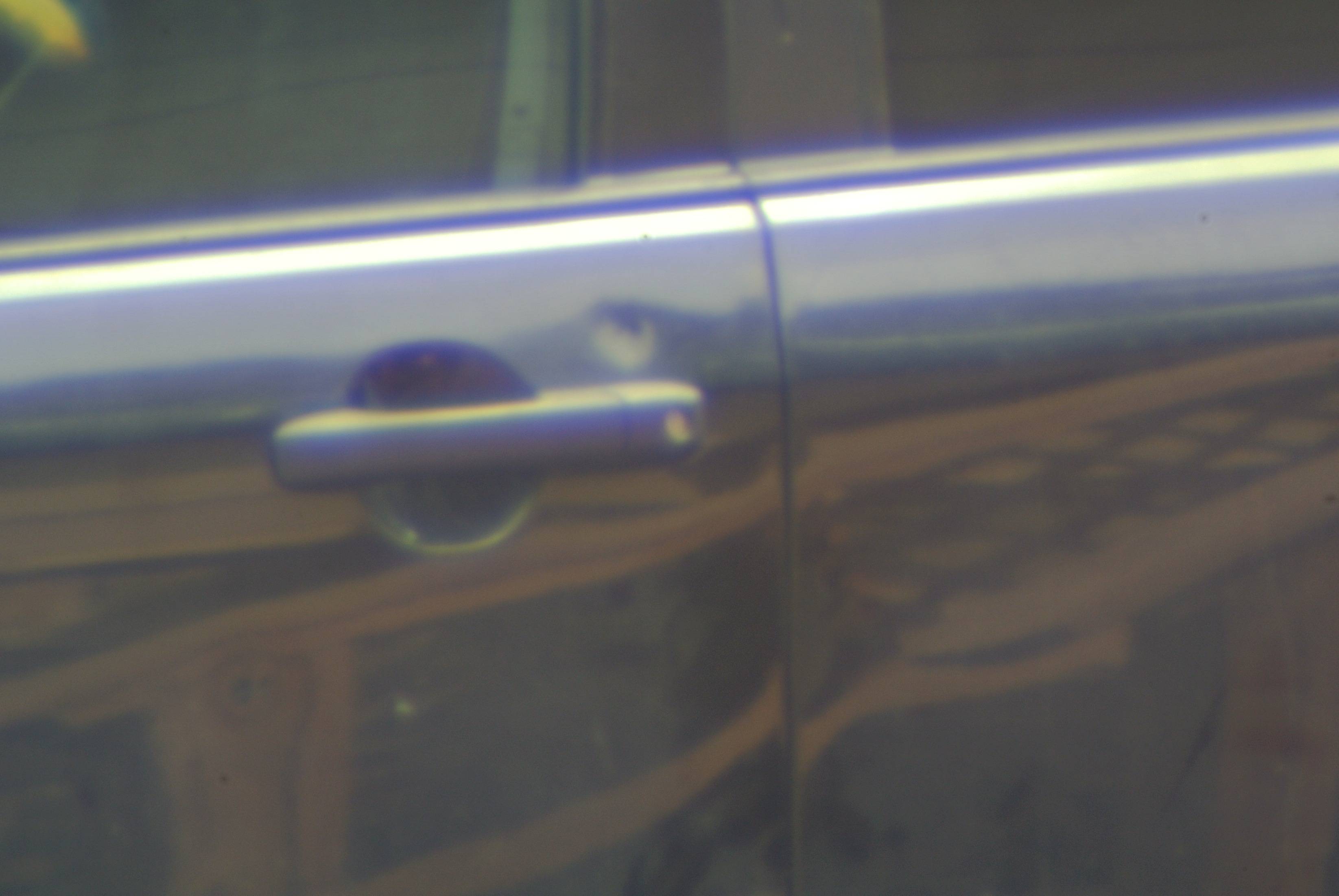 I took off the bellows for these shots. In winter - on a colder night with a larger and fuller moon - I could have a better target, but last night was not ideal for the "14000mm" version. These are "just" 7020mm... 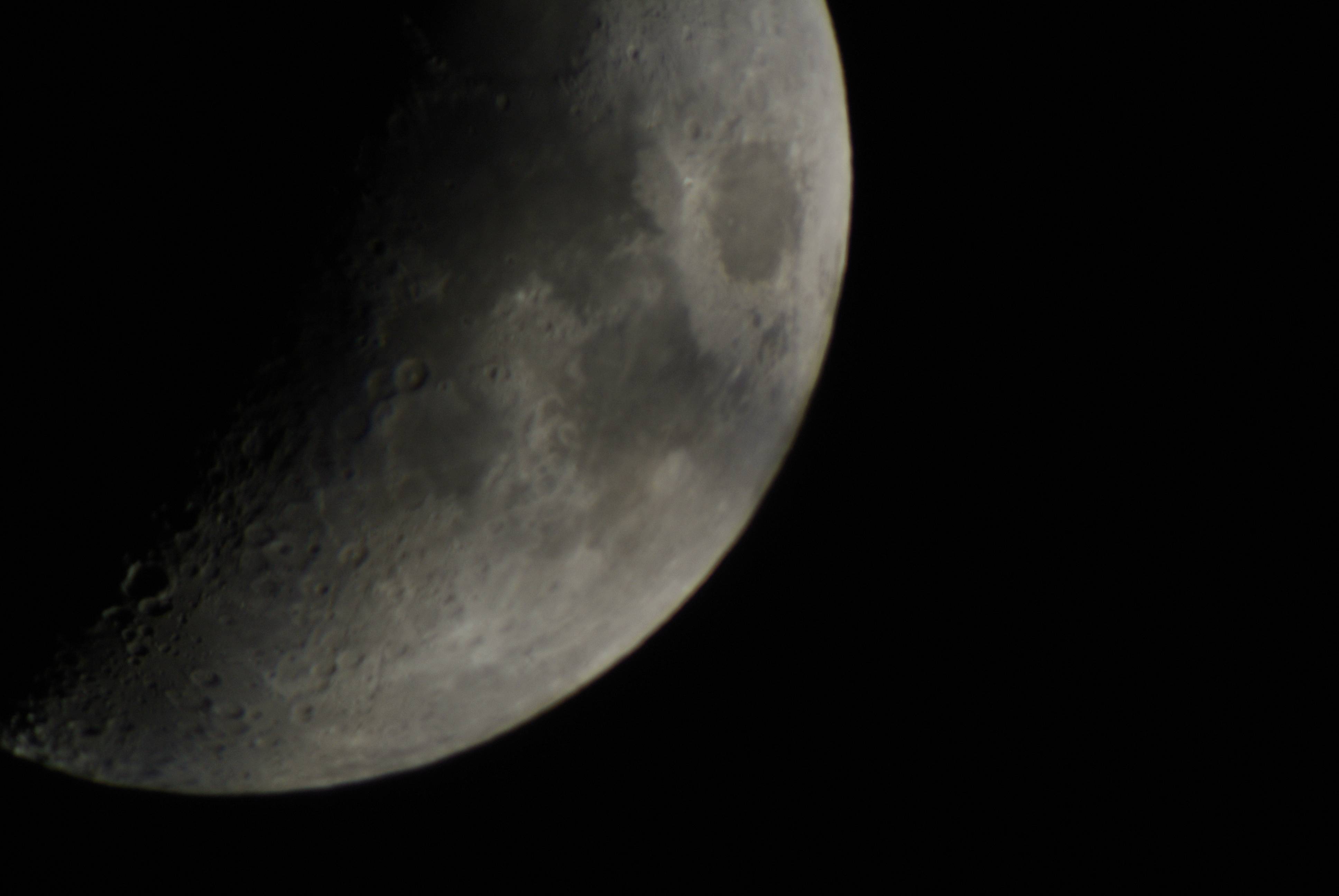 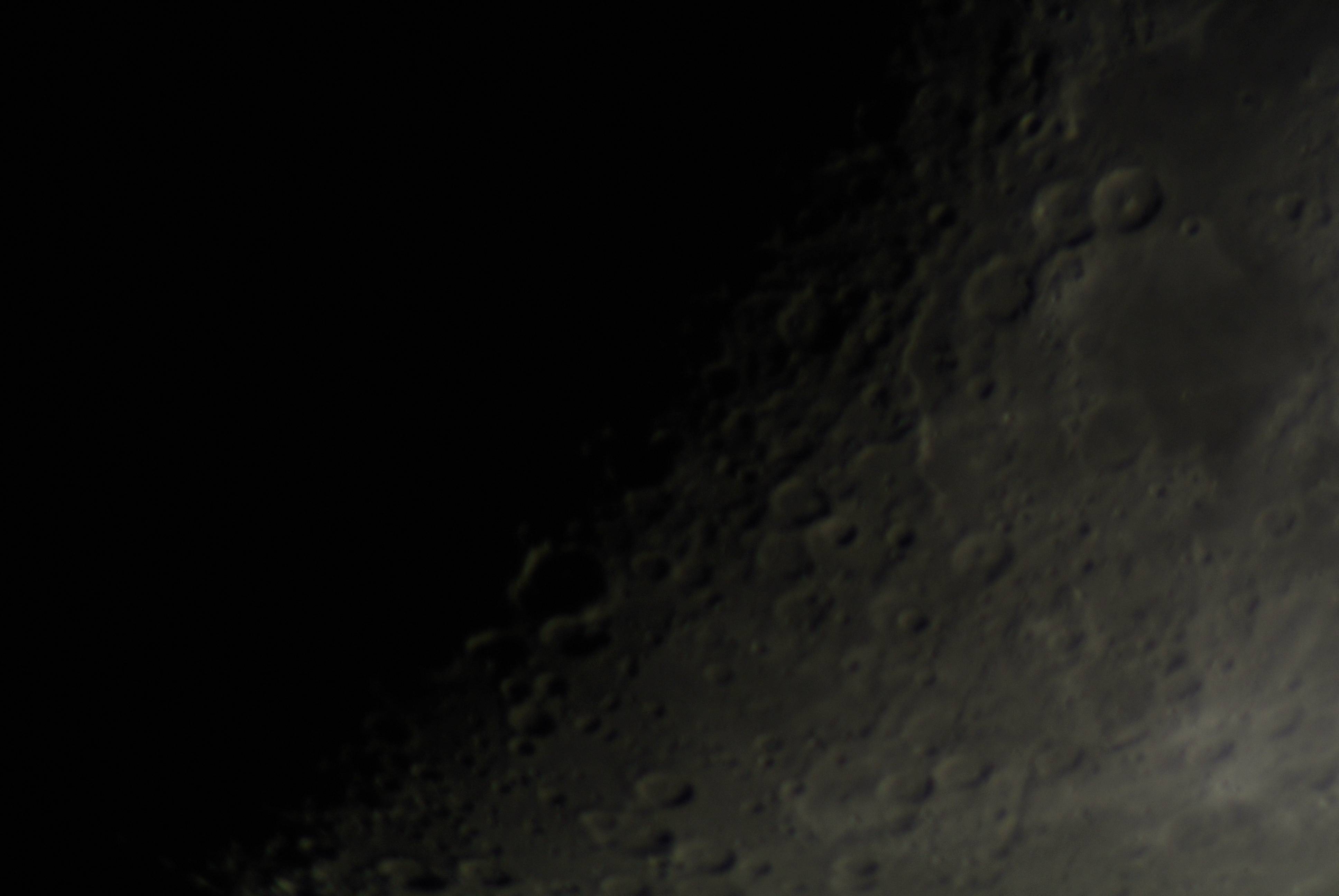 What you need is a modular "rail system" commonly used in videography for mounting the camera body, matte box etc to a common pair of rails, than that rail rig to a tripod (and/or hand/shoulder grips)

You will need to buy various bits and create your own setup depending on your levels/needs etc, see (for example) http://www.camerakings.co.uk/dslr-kits-rigs/

However, these systems are MASSIVELY over-priced (from everywhere) - ebay is another place to look.

I believe you're making this too complicated.

How heavy is your camera?

Attach the camera to the lens. Attach the lens mount to your tripod head. Shoot. Don't worry. I do this all the time with a pro body (Canon 1D4) hanging off the lens. Unless your body is far heavier, you shouldn't have any issue.

The only problem you will have is if you attach your camera to the tripod, and allow the weight of the lens to be supported only by the lens mount, but you're not talking about doing that.

I've never attached both my camera and lens to a tripod. If you are off by a little bit, you'll cause unintended flexing in the lens mount, and that would be bad.

As someone already suggested in 2012, a 15mm lightweight rod system is very helpful here. And unlike 2012, components for such can nowadays be found at popular online retailers cheaply - you would need a set of 1 camera base plate, 1 tripod base plate, 2 rods, 2 lens supports. This can nowadays be had for around $70; even the cheapest brands are quite sturdy.

Not the answer you're looking for? Browse other questions tagged tripod astrophotography teleconverter mirror-lens or ask your own question.

3
What do I need in order to mount my zoom lens onto a tripod?

3
What do I need in order to mount my zoom lens onto a tripod?
14
Practicality of using a telescope as a super telephoto lens?
5
Is it safe to use a telephoto lens when the camera is on a tripod?
1
Are certain type of tripod heads safer than others? Does the price makes a difference?
3
Can I build my own focal reducer by reversing a teleconverter?
2
Tripod support for Canon 11-24mm
3
Which kinds of tripod heads are suitable for panoramic photography?
4
How to reduce shake at high focal lengths {2600mm-3900mm with adapters} when on a tripod?