How to reproduce this dark-toned color effect?

What technique is used in this image to produce such colors?

Is it just saturation and hue adjustment? 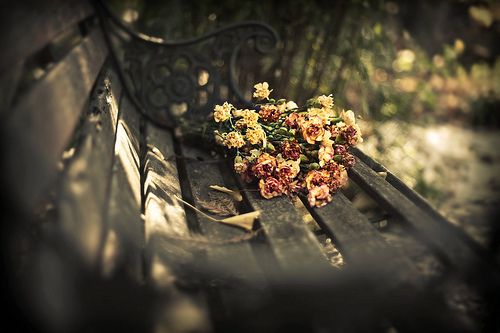 I took that picture a few years ago so I don't exactly remember. My usual technique when i used to have photoshop was to start off with the auto adjusts, and then messing around with the curves with no goal in mind. I would just try random things and see which combinations I liked best. Also, for this picture I desaturated it a little bit and added a vignette (which i think is too strong now). Also I took the shot with sunset light which contributed to the golden colors. Rookie editing Now I use Adobe Lightroom and I like it a lot better because its very easy to use.

Photo has a vignette and little sepia effect I believe. I believe also that WB setting is set to cloudy cause it has this yellowish feeling. I believe that red is desaturated a little bit

I think the most important step is with the exposure. The image here has some nice mid to shadow areas to play with, punctuated by a few intense highlights, this also makes most of the image subdued except for the orange and yellow pop of the roses.

After that to my eyes...

There appears to be a moderate amount of contrast, I'm not seeing too many crushed blacks and only a few blown highlights.

Obviously a yellow cast has been added, either by white balance or a color overlay. Saturation seems somewhat high, you can see some of the color of the bench being over-saturated on the left.

I think a good amount of sharpness has been added, possibly by local contrast enhancement (clarity) / highpass sharpening.

Finally, a lot of vignetting has been added, which darkens the edges of the image to focus the image on the subject.

Not the answer you're looking for? Browse other questions tagged post-processing color reverse-engineering effect or ask your own question.

7
How can I reproduce this effect I created?
2
How is this lighting and colouring effect achieved?
3
How can this lighting/color effect be done?
9
What kind of photo effect is this, where colors are a bit washed out, yet retains the crisp detail and the colors are almost pastel?
20
How to I get the Instagram “Lux” effect without using Instagram?
3
How to achieve a “moody” effect in urban landscapes?
0
What is this effect, with millions of coloured light dots surrounding people in the dark?
4
How can this brightly colored yet gentle pastel-color effect be achieved?
10
How do you achieve this brownish skin color moody look on your photos?
0
How was the twilight blue color effect in this photo produced?