What are the types of camera supports, and when to use which?

What are the types of pods and which pod is suitable for which situation?
Is there a camera holder which can be curled around the shoulders and neck?

What are the pros and cons of them all?

Just for completeness' sake, I'll add a couple of options not touched upon so far.

Chestpod -- This is a device consisting of a shoulder harness, a broad plate that rests on your chest, and an adjustable support arm with a small ball head. It's designed to help you support SLRs and long lenses (usually using the lens's tripod ring). It is not a replacement for a tripod or monopod -- it doesn't come into contact with anything more stable than the photographer's body -- but it can significantly reduce muscle strain and fatigue when working "handheld".

Rifle-stock style suports -- These are, as the name implies, rigs that look very much like a rifle or shotgun stock, with a shoulder piece, a grip with a remote shutter release, and often a forestock to allow the user a more comfortable position to support the front end of a camera with a long lens attached. These are a lot less popular now than they were in the manual focus film SLR days since you don't have handy access to all of the camera's controls while shooting. But for birding it can still be useful (used from the prone position or with an auxilliary support, such as a tree trunk or a fallen log) since it can be nearly as stable as a tripod (assuming sub-second shutter speeds) while being much faster.

Video/Cine shoulder supports -- Devices like these are designed to give you a good compromise between stability and mobility. There is usually a shoulder hook and two handles attached 30-45cm (a foot to a foot and a half) away from the body. They're great for video, but it's very difficult to access the camera's controls while using one, and since video is a fixed horizontal format, there's usually no provision for mounting the camera in a portrait orientation.

Camera stands -- Used in studios, these are tall columns on a heavy rolling base with an adjustable arm for mounting the camera. Typically, these beasts weigh more than a hundred pounds (and can be several hundred), can support cameras weighing tens of pounds comfortably, and give new meaning to the word "stable". Surprisingly, they are often more nimble than a tripod in a studio setting; raising a camera from knee level to stepladder level is usually a matter of turning one knob a few degrees, lifting the camera support arm (which is counterweighted and feather-light to operate) and retightening the knob (and barely finger-tight will do, thank you).

Gorillapod - this has its uses in tabletop photography, with small cameras, or travelling when it can be carried in a purse or bag. Not really a true replacement for a normal tripod.

Length of legs - the main advantage of longer legs is that you can position the camera at the photographer's eye level, making it a lot more convenient to frame and focus. I would say this is especially true of a monopod as you will be looking through the viewfinder and don't want to be hunched over.

Longer legs may be an advantage in some situations.

On the other hand, for other shots it's useful to have a tripod that can position the camera very near to ground level. Apart from very small tripods and gorillapods, some tripods have legs that unlock and extend out almost perpendicular like so: 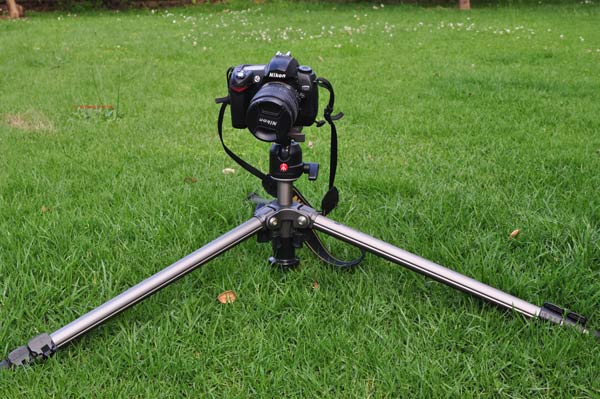 and others have reversible centre tubes so the camera can be mounted upside down. 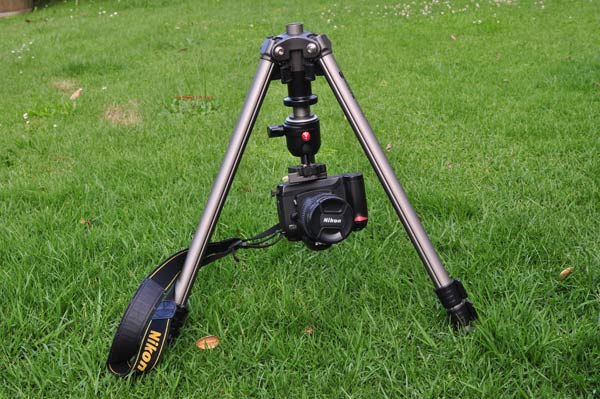 If you get a tripod with longer legs, you'll want to be sure it's a sturdy tripod or it will be wobbly and defeat the purpose of having one in the first place.

A couple people touched on this, but it should be stated more explicitly: when you use a tripod with longer legs, it becomes less stable. For example, many tripods have legs that can be extended. When the legs are collapsed all the way, the tripod is at its most stable. The more you extend the legs, the more susceptible the camera is to wind. If you're outdoors and the wind is blowing or gusting, and especially if you're taking long exposures or using the self timer, you're more likely to get some camera shake. 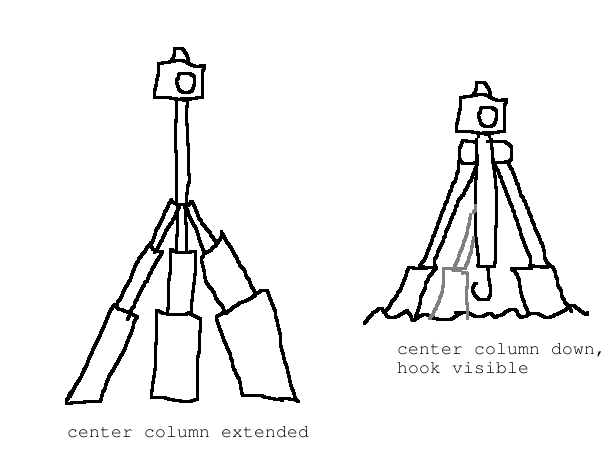 Finally, and out of the scope of your question but worth mentioning, the material out of which the tripod is made affects its stability. Some materials transmit vibrations while others dampen it. So tripods made of wood, carbon fiber, aluminum, etc. will have different responses to ground vibrations (such as you stepping away after initiating a long exposure).

Dedicated photographer can found himself/herself spending most of his/her time using a tripod as a support. There are several attributes defines a suitable tripod for you (where you should be able to find those descriptions per other's question or webpages).

As per alternative camera holder/supporter, they tends to be very specific:

For shooting landscapes and macro, a strong (usually means heavy) tripod is optimal and usually is the only stand/support you will need.

In addition to part 2 of the question "Do the length of pod legs matter, in which cases?"

If the availability of different height matters to you, then answer is yes.

Only concerning about height availability and shooting landscapes, a bigger professional tripod can go very low to take reflection shots or interesting perspective, and also able to be tall enough to reach to sight behind fences/obstacles.
One can decide to give up those features to gain other attributes such as weight, size or price.

Others have covered the pros and cons of the various options so I'll talk about the height first:

In most cases you will use the tripod in one of 4 positions:

Now, for the various types of camera stabilizer:

Just to be contrary I'll answer the question sideways a bit. I like to take nature pictures off the beaten path. Lugging a tripod 10 miles up a mountain is usually not reasonable. So instead of just thinking "tripod", think about all the ways you can steady a camera. I've had to improvise a number of times. Sometimes you can make it work, sometimes not, but it's good to broaden your thinking anyway.

One thing about being in the woods is that there tend to be trees around. Trees make pretty good camera-steadiers, although you have to find one in the right place. Hold the camera against the vertical trunk so that it touches at two points, usually one side of the body and near the end of the lens. Actually its usually one side of your hand that touches tree with the other side of your hand holding some part of the camera. That makes it easy to so small aiming adjustments.

You might think horizontal limbs would be good for resting a camera on, but those are rarely in the right place, and the ones that are strong enough aren't at the right height.

Don't be afraid to get down on the ground and get dirty, as long as the camera doesn't get dirty. Sometimes it can be very interesting to think about a composition from ground level. Work the low foreground into a landscape shot. You don't have to tell anyone you came accross that by accident of trying to steady the camera.

Sitting down with one knee bent up, then using the knee as a prop works pretty well, particularly for a longer lens when you're a old fart like me that doesn't contort so easily anymore. Another advantage of this is that you'll be less visible to wildlife and look less threatening too.

Then there is just hand holding, but doing it carefully. Feet spread apart a bit but not "wide", one elbow in your belly with hand forward so that torso-camera-forearm makes a triangle sticking forward, other arm tucked in to your side holding the camera body, take a few good breaths, then a deep one, then let it out a bit, and you'll be holding the camera much stedier than usual. Practise with a long lens to see what works for you and what shutter speed you can get away with. Keep in mind a little more noise from higher ISO is better than motion blur, so crank it up and keep the shutter speed as fast as you can manage.

A camera stabilizer is a kind of camera mounting device which is used to prevent camera shake and vibration shooting video. It is widely used by cinematographers in the filming industry for capturing fast movements on unstable surfaces.

The biggest benefit of using a camera stabilizer is to ensure the stability of the camera, allowing the operator to make smooth shots.

Some handheld camera stabilizers have the function of automatic focusing. So there is no need to purchase extra focus for your camera.

Not the answer you're looking for? Browse other questions tagged equipment-recommendation tripod or ask your own question.

3
Is it possible to get precise framing with an unstabilized lens with a long focal length?