Why does AWB mode on my camera produce a blue tinge in photographs?

Is that normal? Canon Powershot SX210.

I used to use the AWB mode in the fully manual mode. 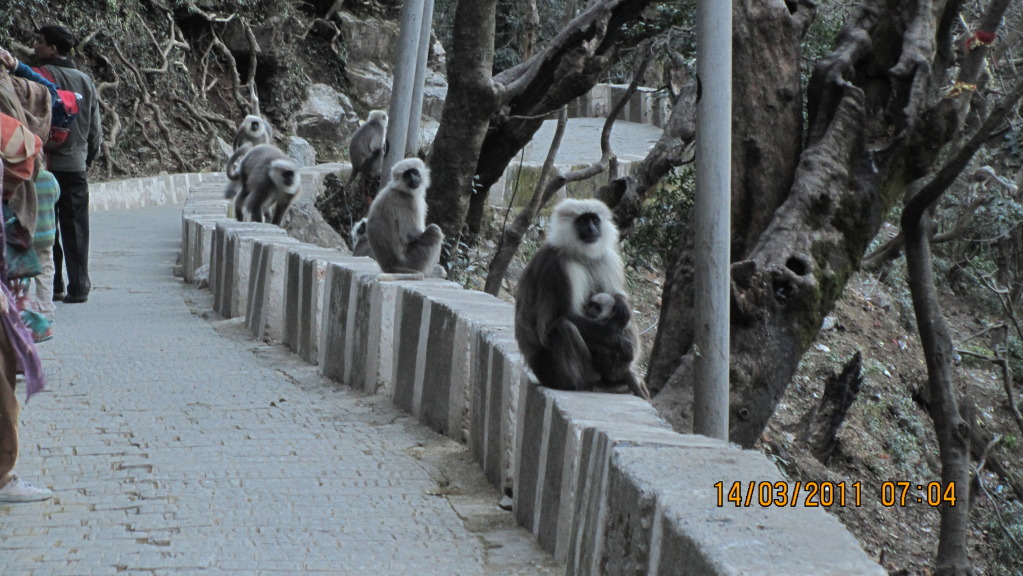 When it comes to "white balance", what the camera is really trying to do is make things that should be white as "neutral white" as possible...and damn the result to anything else. In the case of the sample picture you posted, it seems pretty clear that the key white components of the photo that the camera made as neutral as possible are the manes of the monkeys (gray-white fur), and the alternating concrete blocks that are white.

To my eyes, on a properly calibrated screen (I calibrate to D55, or 5500k, also known as neutral sunlight and a gamma of 2.2, so my whites are about as neutral and natural as they get), those two things do indeed look "correctly white" (with maybe a very slight blueish tinge) when checked against the white background of this site, when taking only those two things into account. Given the overall cooler cast to the image as a whole, the image does seem to be improperly balanced. The camera made a guess based on a semi-intelligent algorithm, and while it is "technically" correct, it is "perceptually" incorrect. In most cases, you probably want your photos to be perceptually correct. So, while this is kind of "normal" due to limitations of technology, its not necessarily something you have to live with either.

There are two things you can do to correct this. First, you might try a white balance preset. In many cases, manually choosing a "close enough" white balance that generally matches the kind of lighting illuminating your scene will produce a decent enough result that is better than AWB. Common presets include daylight/daytime, cloudy and shade for outdoor scenes, as well as tungsten (standard kind of lighting in most homes lit by common lamps), fluorescent (standard kind of lighting at many commercial and business locations such as shopping markets or office buildings), and flash for indoor/artificially lit scenes. Try a preset white balance, and if the color cast is worse than AWB relative to reality, switch back.

If you have the option, and the time and tools to perform post processing, you can also use RAW capture. With RAW, its easiest to just keep the camera on AWB all the time, and always correct your photos with a RAW image processor like Lightroom, Adobe Aperture, or Photoshop+ACR on your computer. With any one of these tools, it is a fairly simple matter to "fix" white balance with a couple sliders or a "neutral pixel picker" tool. You can balance your images to appear neutral, or intentionally add a color cast for artistic appeal.

It's hard to be definitive without knowing exactly the situations where this happens, but in general, yes, color tinges like that are to be expected. Auto white-balance is basically just the camera's guess based on the limited data it has (see Does Auto White-Balance Really Work? How?). Sometimes, that guess is wrong, usually simply because the data that the algorithm has to work with is limited.

There's several situations where a blue tinge might be more likely. If the camera guesses it's under incandescent light when it's not, it's basically certain to error in that way.

Not the answer you're looking for? Browse other questions tagged canon white-balance or ask your own question.

37
Does Auto White-Balance Really Work? How?

2
Why might my camera show spots in video mode?
2
Why changing image format changes the area shown on the LCD screen?
1
Why does using the flash mess up the white balance?
2
Why is there a colour cast when using an incorrect white balance?
4
Why does my Canon 600D take pictures in live mode but not in viewfinder mode?
3
Why does my canon 1200d go black after taking photos on manual?
6
Why do my photos have an exaggerated blue hue when I shoot in manual mode?
17
Why is this smartphone picture better than this dedicated camera picture?
4
Same manual camera settings under continuous light but some pictures are yellow and some are blue