Why is my camera missing the action again and again?

I shot a series of images in continuous high with my D4 + AF-S 300mm F/2.8 of this rat. I set my camera to AF-C single point and also tried the D9 setting. Throughout the series of images I kept pressing the AF-ON button but the camera didnt seem to track my subject at all. Look at the images below. I tried to keep the focus point on the subject but since the rat started to run towards the camera there are NO sharp images. I think the D4 and the 300mm 2.8 should be very capable of this situation even with newer and better cameras on the market today. All images are shot at 1/1600s F/2.8 and ISO 800 so it wasnt too dark outside. I shot multiple series of this rat and squirrels this morning and almost every one of them returned no sharp images except the first image where no tracking was needed. Am I missing a crucial technique or setting? 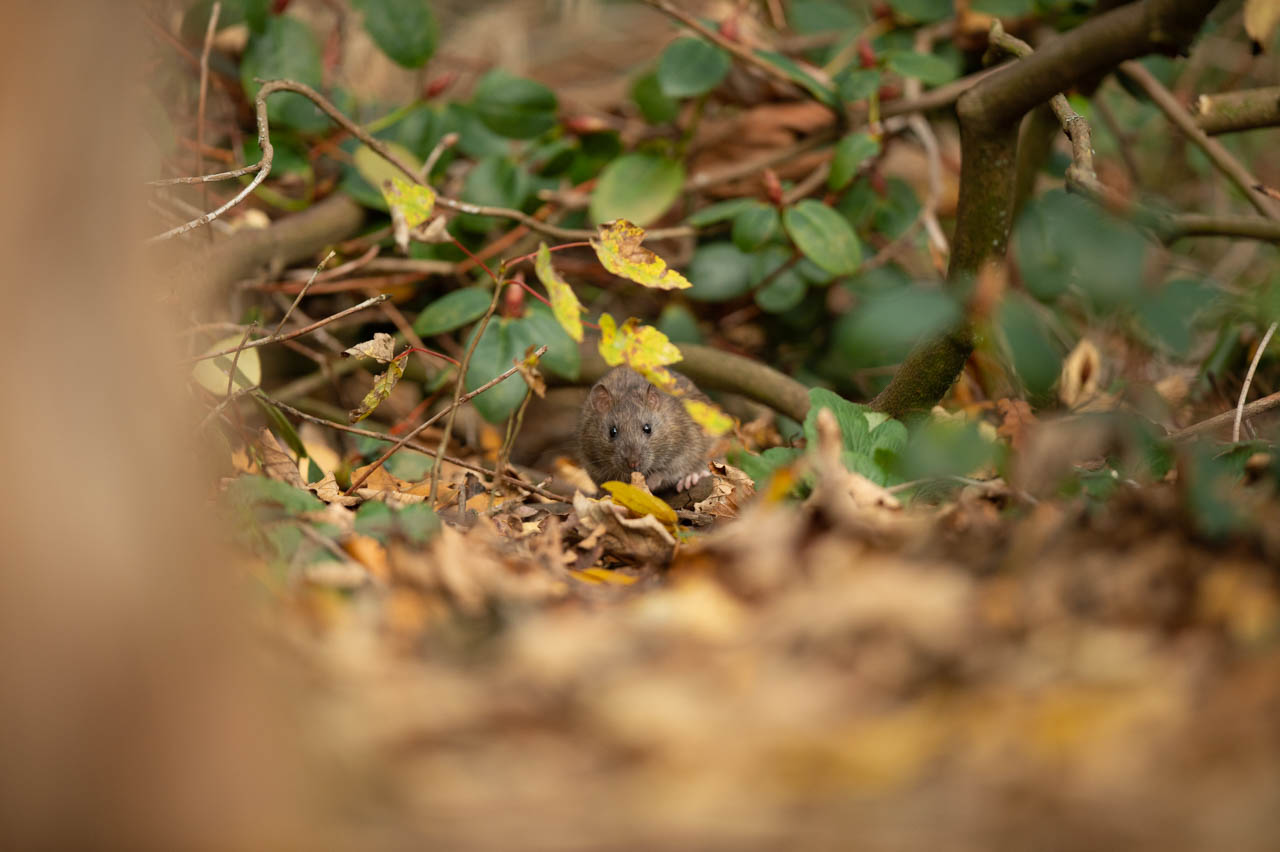 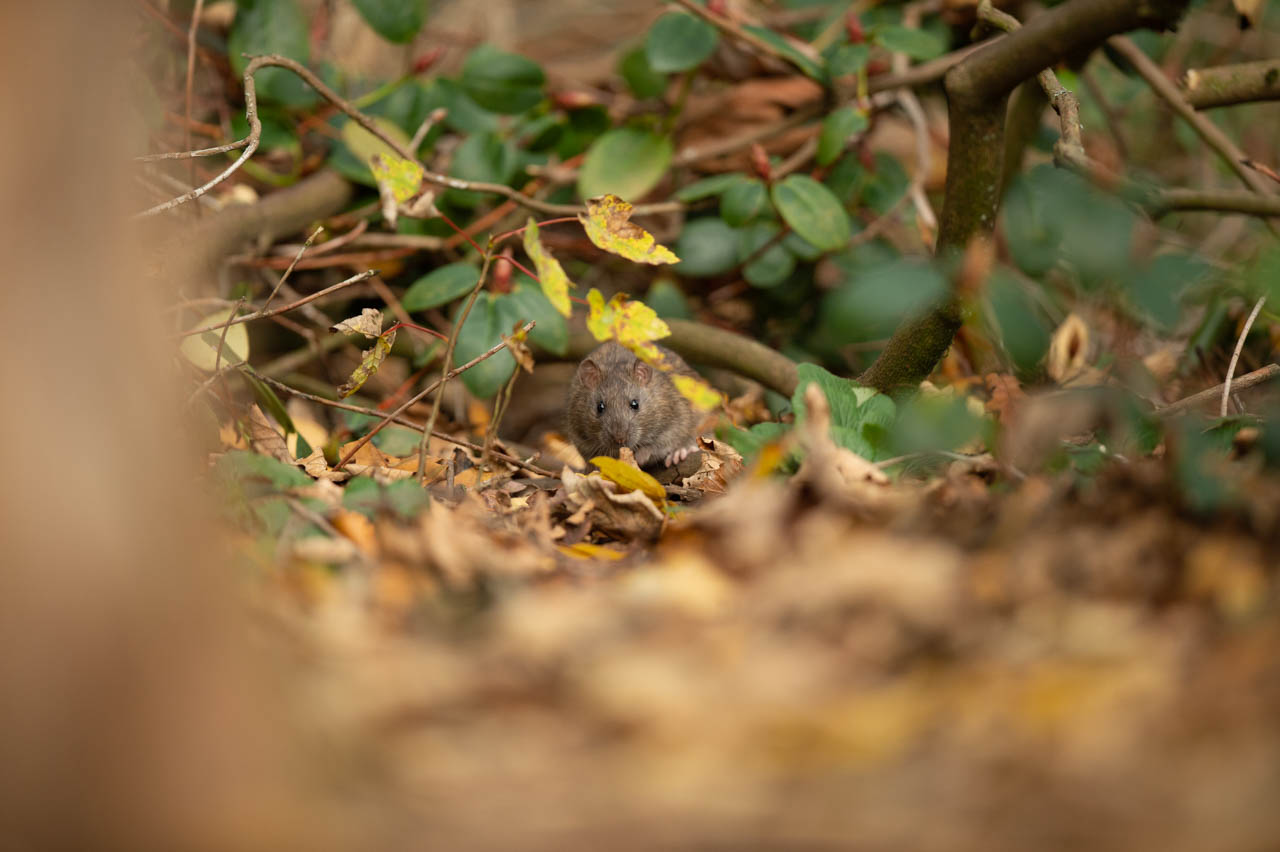 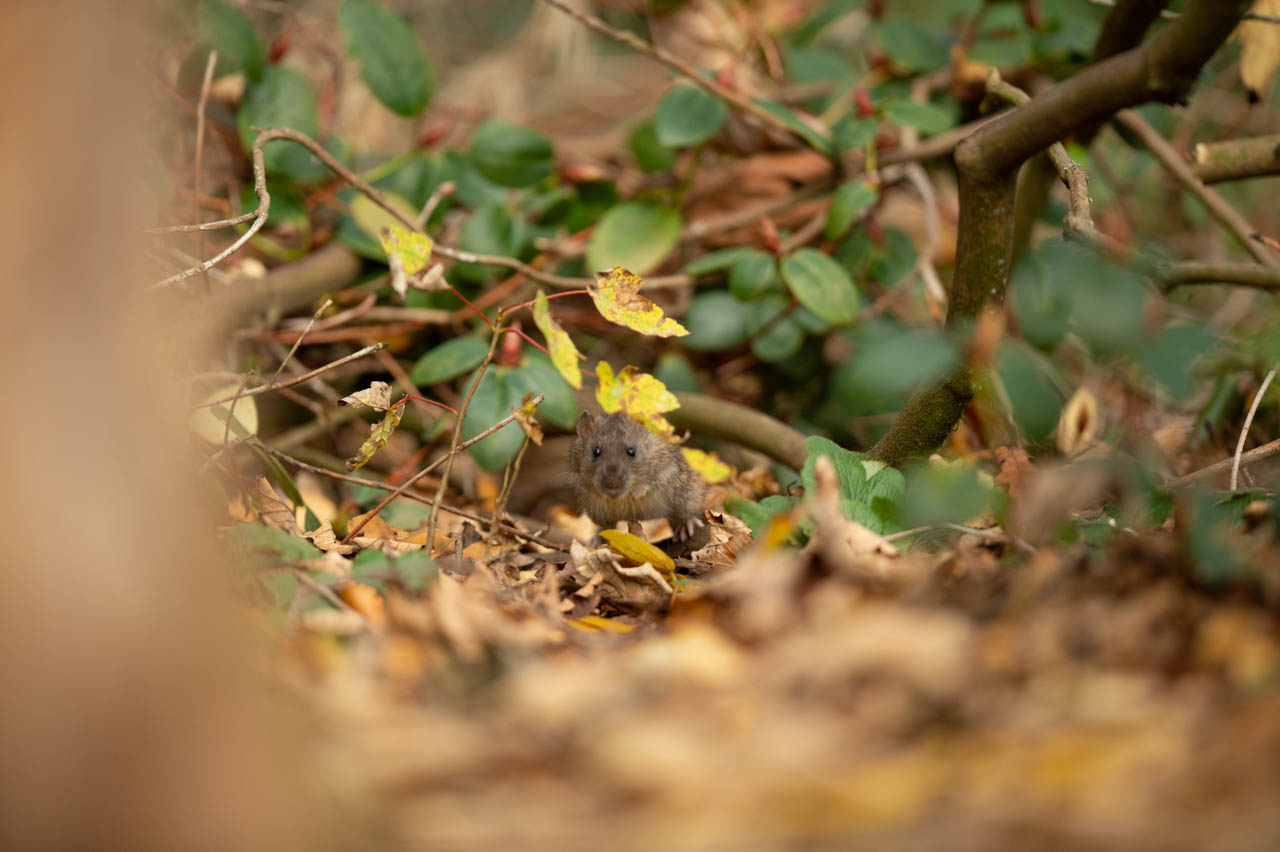 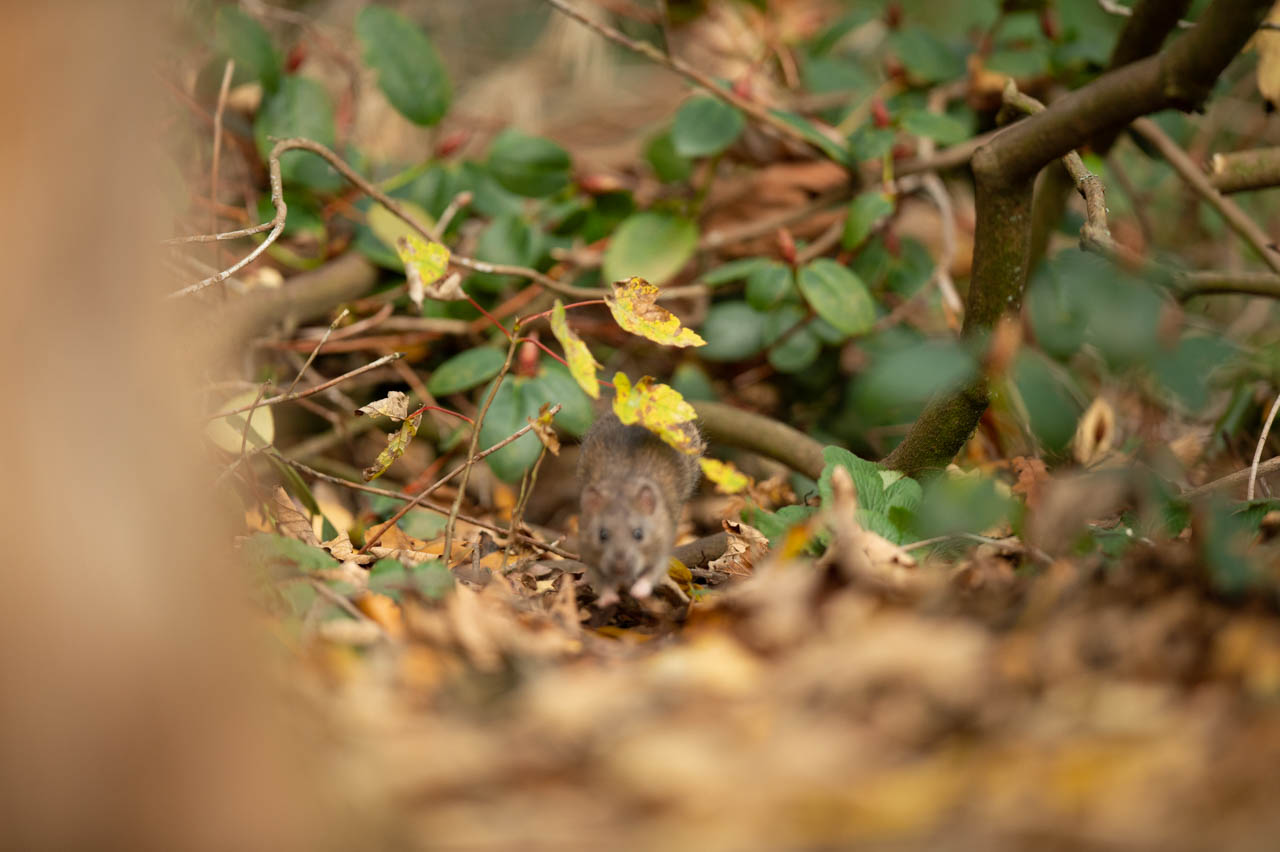 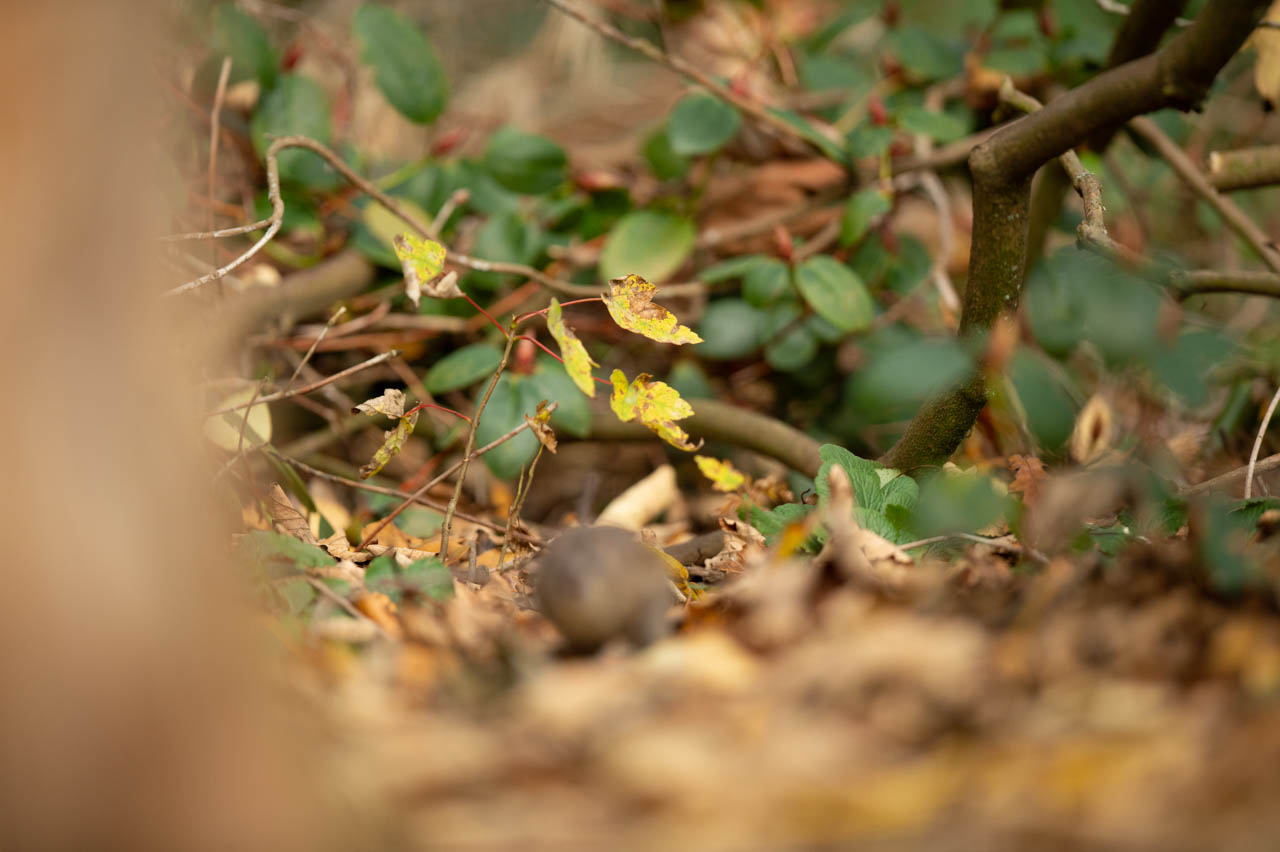 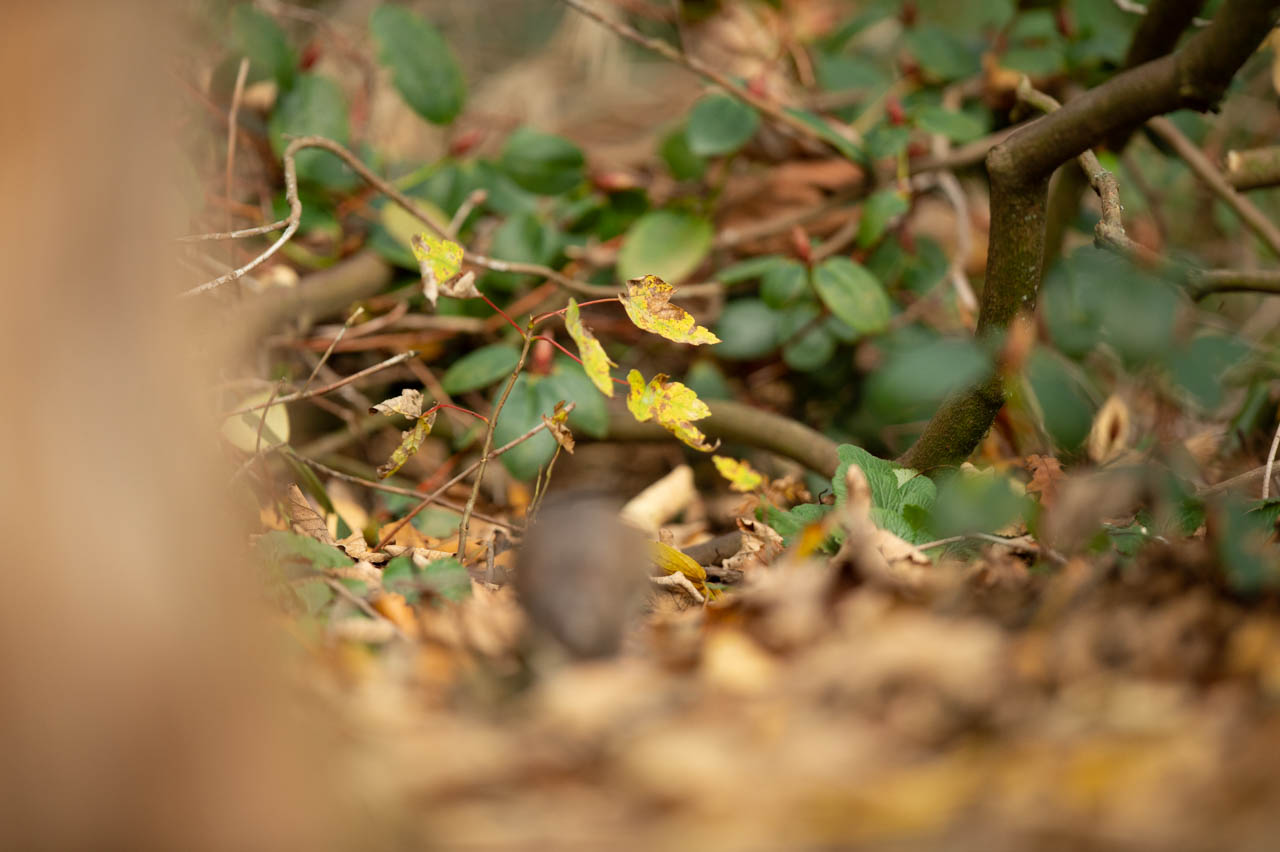 Capturing fast motion is hard. It requires persistence, benefits from practice, and focus on the few successes not the many failures.

Even experienced photographers produce more poor pictures than good, and only a handful of great pictures. Persistence means managing expectations of always getting a keeper. Sometimes everyone gets skunked.

To get good pictures, you have to be willing to make bad pictures. You have to just keep putting in time to gain experience.

If you want to track subjects moving around in the frame, you need to use an appropriate AF mode that allows the camera to follow a subject as it moves around in the frame. In Nikon nomenclature, that is "3D tracking" (or any of the dynamic mode options).¹ You select the initial AF point and then the camera attempts to track whatever was at the initial AF point in each subsequent frame.

You said you also tried d9, that was a much better choice than single point; personally I would probably have been in d51 just because that's what I almost always used (even w/ static subjects). And d9 is still a rather small area, but IDT that's the main issue.

There's a few things to note... predictive tracking cannot be established while the subject is stationary. And any camera is going to have a harder time catching/tracking that first twitch moment. AF tracking is much more effective after it's been established (e.g. panning with a subject).

The subject and scene is rather low contrast... brown features on brown head/body on a mostly brown background. That doesn't give the camera much to work with. I do not think using 3D (color + auto d51) would have helped in this case due to the brown/brown situation.

The focus points detect lines; vertical, horizontal, or both. With that lens the 9 points in d9 are functioning as "cross type" and are sensitive to lines in both directions (or the vertical/horizontal component of diagonal lines)... But there really aren't many lines with any contrast/detail for the camera to focus on.

You might think that fur is nothing but lines... however, those lines are extremely small in the frame. They may be finer/smaller than the resolution of the focus points; they're probably not, but smaller details are harder for the AF system to see/track. The entire subject is smaller than the d9 focus area, and the rat's eye is waaaay smaller than a focus point. The smaller a detail is (or of less contrast) the less out of focus it has to be before the AF system cannot see/discern it at all.

Basically, I think you were asking much more of the camera than you think; apparently too much. You would have had much better chances if the subject was much larger in the frame so that the details you're asking it to focus on are not so small/fine, and the apparent contrast in them is greater.

The only other "setting" I can suggest is to use a smaller aperture for more depth of field, and to bias the initial focus forward so that the rat is near the back of it. That will help keep the rat in focus as it first begins to move towards the camera, and give the camera a better chance of catching/tracking the motion before loosing the focus detail(s) entirely.

This is the AF points superimposed to scale w/ the d9 points highlighted... there really isn't much of anything for the d9 focus points to work with. 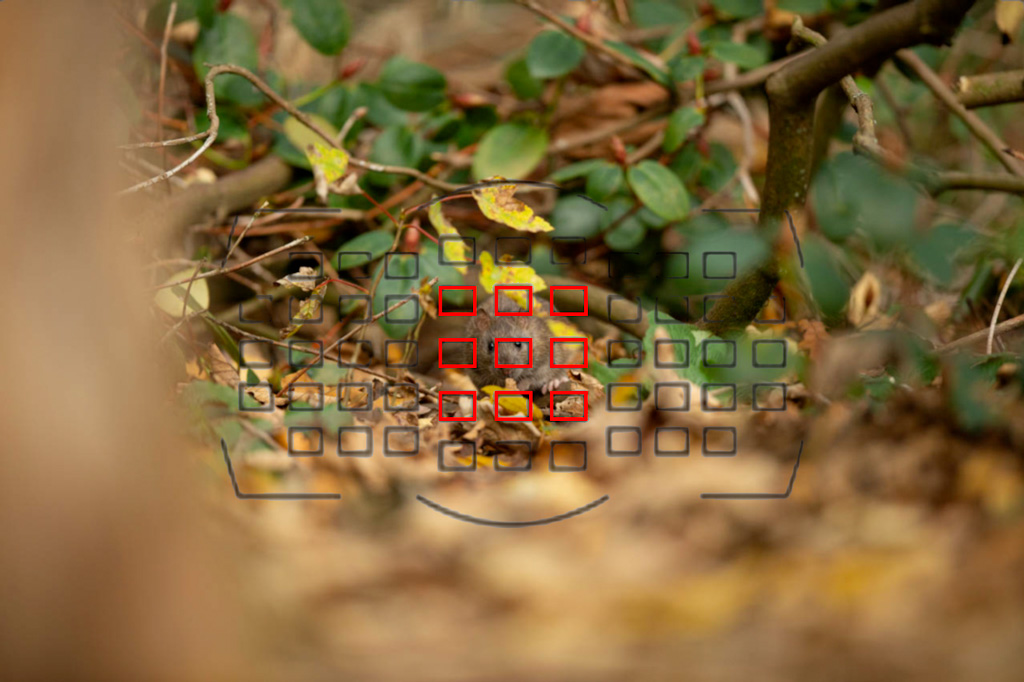 Then one tiny hop, and some small fraction of a second later, there's nothing at all. 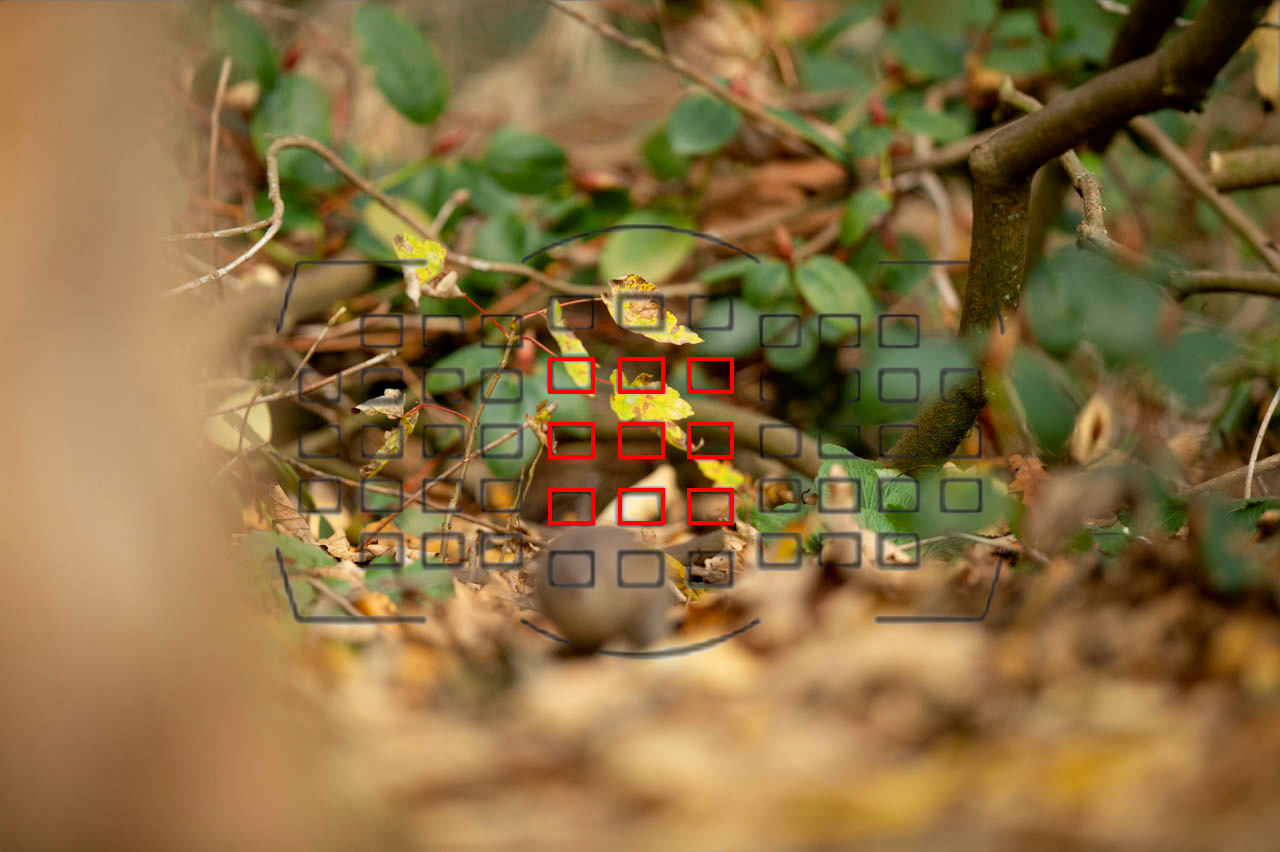 In my experience cameras tend to focus (when they can) on the closest thing in the area being considered. Changing to D9 may move the focus in front of your subject by capturing some of the foreground. The first three shots show the focus a little closer than you want, perhaps because of the leaf in front of the nose. It doesn't seem to be moving very fast here, so the autofocus is probably keeping up. The fourth shot has the focus where you wanted it for the first three, which is now right on the ears. Depending on how quickly it moves, I would be trying to keep the center point on the target. Given the light level, I would try a slower shutter and smaller aperture to get more depth of field. 1/400 and f/5.6 might work better. It depends how quickly it moves. Of course, in the time it takes to change the setting it might run away. As others have said, this is hard. It is especially hard in the low light you had. Another four stops of light so you could use 1/1600 and f/11 would be very welcome.

I would suggest few changes to your setup.

You can always artifically defocus the image but never focus blurred one.

Not the answer you're looking for? Browse other questions tagged autofocus wildlife action continuous-autofocus or ask your own question.

19
How can I get better focus when a subject is moving towards or away from the camera?
15
Where can I find advice on using an advanced AF system for wildlife and bird photography?
6
How does one track action with a fast telephoto prime lens?
0
How should I handle auto focus on a moving train
0
My Nikon D5300 LCD not turning up + Auto focus not working
0
Use Built-in Pop up flash to focus in Manual Mode, Canon 1300D
1
Best settings to focus in low light and low contrast condition
2
Does EOS RP support recomposing with servo AF?
3
Unable to take the shot when subject is moving fast