How should I handle auto focus on a moving train

I do railway photography and especially when light is less than optimal, the camera's auto focus has hard time latching onto an oncoming train. (I take multiple shots in a sequence as the train approaches.) The results are spotty - often the locomotive is slightly out of focus.

I've tried single servo and single point settings, but tracking the single point of focus on a moving object is tricky!

When the light gets dim enough there comes a time when you have to give up shooting sequences of fast moving objects coming towards you and instead pre-focus on a spot and wait for the subject to hit the mark. Cross ties work pretty good for locking focus on a point the train is about to be. You also gain the advantage of getting the one shot when the train is at the point for which you composed the shot. When shooting in bursts, you are at the mercy of the camera's frame rate in terms of the exact instant the shutter will open for each shot in the sequence. 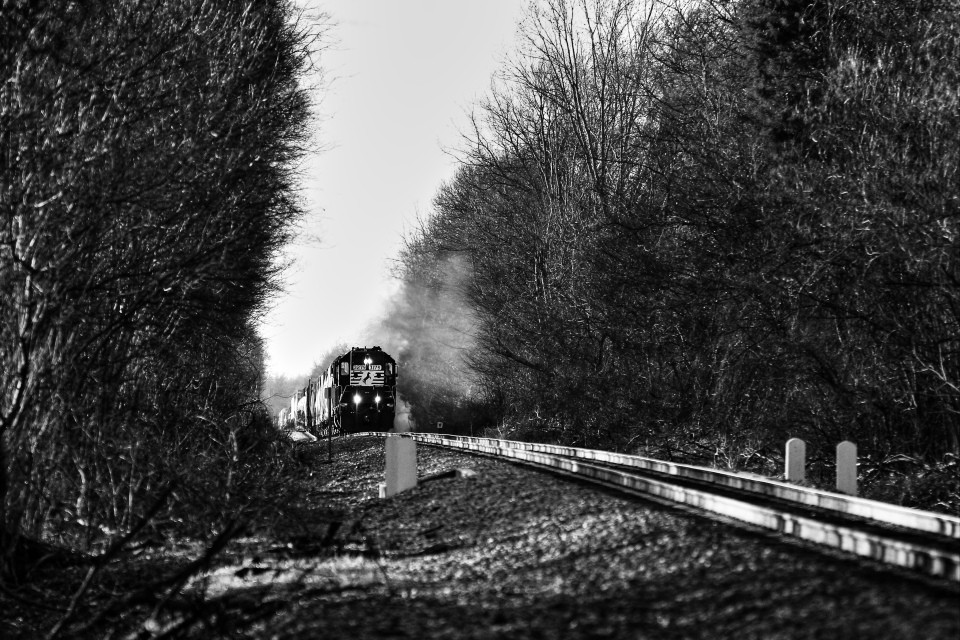 If the camera is having trouble focusing, you can use try using manual focus and waiting for the train to come to the correct depth and take the photo at that moment (or take a series of photos near the time). Additionally, if you have enough light, as Michael Clark noted, you can stop down the aperture (bigger number) in order to increase the depth of field, though it will increase your shutter speed.

Also, double check your shutter speed. If light is low and your shutter speed is getting long, then the train could be in perfect focus, but the motion of the train itself could make it appear blurry as the train is actually moving during your shot. If this is the case, either open the aperture up more (lower number) or increase the ISO.

In this scenario I would use a light beam activated remote shutter control. This is a device consisting of a beamed light source (typically a laser or a LED and a photo sensor). As soon as the beam is broken by an incoming object, the shutter is triggered.

Warning! Since you have to place the trigger in the path of the train it might be tempting to step onto the tracks. This is very dangerous and in many (all?) countries this is illegal and punishable. I do not encourage anyone to break the law. Either you try to get a permission from the authorities (probably very unlikely, considering the danger involved) or you need to beam the trigger from one side of the tracks to another, without trespassing the tracks themselves. Given that you use a trigger with long enough range and preferrably also a laser (a LED are likely to show up in the shot) and have a crossing nearby to get you to the other side you'll be fine. Of course this might still be illegal to do in some countries and if so you'll just have to come up with something else.

Set up your gear when there is still enough light to comfortably lock focus at the point where the train will cross the beam and you're set. If focus carfully you can use a very large aperture, letting in more light and get a shallow depth of field if that is what you're looking to capture.

By using this setup you can take some photographs without the train to ensure that the exposure is spot on and when you're ready just wait. If you're photographing at dusk and the light is constantly changing you just have to keep evaluating the scene with more test shots.

As long as everything is set up perfectly you just have to take one photograph and there is no need for bursts of photos or autofocus and it will still turn up great.

Not the answer you're looking for? Browse other questions tagged autofocus nikon-d90 nikon-d3100 or ask your own question.

16
When to use a particular auto-focus mode
1
Why is exposure meter reading not changing in Manual mode?
4
What autofocus zone selection mode should I use for action/event shooting?
2
Why are some portion of my landscape shots totally out of focus?
4
Which focus mode should I use for a portrait shoot?
5
How to prevent autofocus but retain tethered focus control?
1
AI Servo does not support Live View mode for Canon 1DX Mk ii
3
Unable to take the shot when subject is moving fast
1
Half press on Nikon D90 triggers shooting