Why does my camera's automatic mode render both white and black cards as more of a medium grey?

Can anyone tell me why when taking the following 3 photos, in a room with natural light coming in and fill my viewfinder...

a) when I take a photo of a white piece of card it comes up as grey in colour?

b)when I take a photo of a black piece of card it comes up slightly darker in colour? and

c) When I overlap the cards, the white half is lighter and the black half is black?

Your camera's light meter can't tell the difference between a black cat in a coal mine and a white cat in a snowstorm. It assumes everything you point your camera at is somewhere about halfway in between those extremes. That's why the best card to use to set exposure is a grey card.

Unless you tell it otherwise, many cameras will try to expose whatever you point it at to that medium value.

Light meters have gotten a little more sophisticated in recent years, but you have to give them something to work with. When the entire field of view is more or less the same color and brightness, the added logic doesn't have much to go on.

Some cameras are getting pretty good at guessing better with actual scenes, especially those with RGB+IR light meters which use all three primary colors plus near-infrared to meter the scene and compare it to a library in the firmware that will probably be able to tell the difference between a bright blue sky in the top of the frame and dark green forest in the lower part of the frame. The light meters in older and many entry level cameras are monochrome and can't meter in color, so they have to guess even more and often get tricky situations completely wrong.

Scene modes are a way of the less knowledgeable or less experienced photographer telling the camera what the conditions of the photo are so that the camera can use the appropriate settings to maximize the chances of a successful photo.

The more experienced photographer understands that a camera doesn't know if we are photographing a black cat in a coal mine or a white cat in a blizzard. The more experienced photographer knows how to alter the camera's settings to make the scene look bright without totally overexposing the image or dark without totally underexposing the image. The novice does not usually know they need to do this, much less how to do this.

The same is true of the many other scene modes. It gives the less knowledgeable photographer a way to tell the camera what kind of scene they are shooting and the camera will attempt to pick the best combination of shutter duration, aperture, and ISO to use for that particular kind of scene. The photographer doesn't really need to know what the camera does to get there. They just need to be able to recognize the difference between a bright sunny day at the beach (Snow/Beach scene mode) and a night out on the town (Night portrait scene mode). They just need to be able to tell the camera they are shooting a running subject (Sports scene mode) or a static nature scene (Landscape scene mode). This allows the camera to emphasize what is most important for a particular type of shot. If conditions are less than ideal, the camera will use one of the other, less important factors for a particular type of photo to compromise and keep the most important thing as optimal as possible.

As a photographer begins to advance their knowledge and skill level, they learn how to use exposure compensation to tell the camera about the scene in front of them. Eventually they learn about different metering patterns and when each is most useful and how each affects what their camera's meter is telling them.

a) photo of a predominantly white area will be exposed towards middle gray (underexposed).

b) photo of a predominantly black area will be exposed towards middle gray (overexposed).

c) photo of half and half white and black will be exposed towards middle gray (or about correctly in that case, and this does represent most average scenes, but not the exceptional scenes).

The photographer has eyes and a brain, and can simply look first, and can recognize the exceptional scenes, and can apply any expected correction.

More about this specific issue, and about how light meters work is at my site at https://www.scantips.com/lights/metering.html

When you look around you, your eyes (controlled by your brain) will adjust how much light is allowed to reach the retina by opening/closing the iris (or even your eyelids in the most extreme cases). So when in a dark place, you need more light than in a very bright place.

Your camera has the same needs. You need to adjust exposure, which is a combination of the sensitivity (the so-called ISO setting), shutter speed, and aperture.

When in automatic mode, your camera needs to decide what exposure setting it needs. It does so by looking at the picture, and trying to make sure the picture is about 18% gray (somehow somebody decided that this is most representative of reality). The exact algorithm may vary, but let's consider here that it's just an average of the whole picture.

So if you shoot a fully black or fully white card, in both cases the camera tries to bring that to the same thing, an 18% gray, by adjusting exposure. Exposure settings are not continuous nor infinite, so it doesn't quite get exactly what it wanted (the two results are not the same exact gray), but close enough. If you look at the exposure settings for both pictures (they're recorded in the EXIF data), you'll see they are very different:

When you take a picture of the card with the two halves, then the camera will use a setting about half-way between the two above settings. It's probably still off as you're about 50% grey when the camera expects it to be 18%, but it's of course a lot more realistic, as the white is white and the black is black.

You can use exposure compensation or switch to manual mode to control the camera yourself.

So you have to adjust the exposure of the camera for the 18% grey bias depending of the color and shade you actually exposing it. Check the illustration below from Click it Up a Notch® with COURTNEY SLAZINIK. A hint like in most zone systems, ZONE V is where 18% lays. 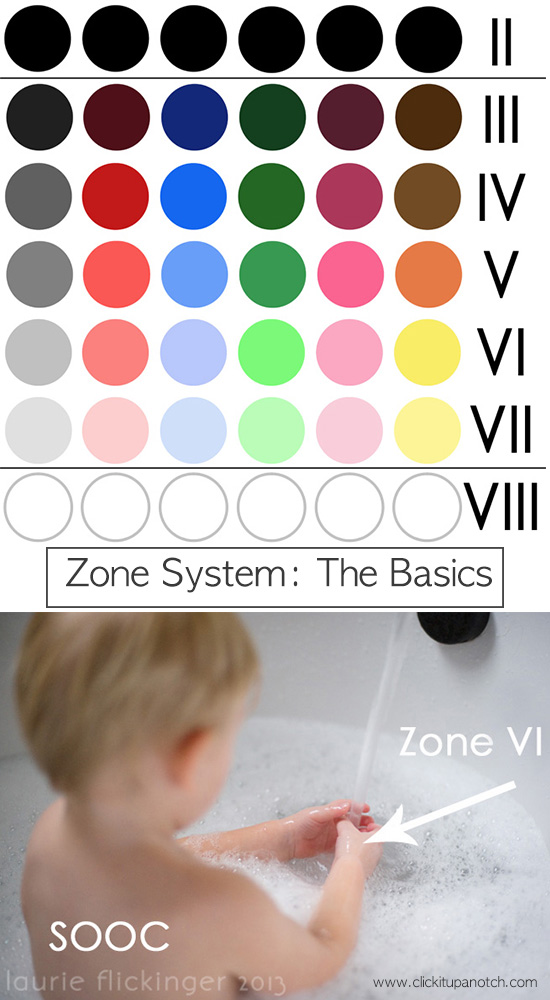 To know more ZONE SYSTEM: THE BASICS by Click it Up a Notch®

Not the answer you're looking for? Browse other questions tagged metering or ask your own question.

3
How does 18% exposure algorithm work?
0
How does a camera in an automatic mode choose what exposure, aperture and ISO to use?