Is it technologically possible for a sensor to run two ISO's at once?

This question (Why don't digital cameras have better dynamic ranges?) combined with a typical sunset photo got me thinking...

Exposure differences between sky and ground in a sunset shot are usually, by me at least, solved with a grad. ND.

But, what I'm wondering is...is it technologically possible to have the sensor apply, say ISO 100 to one half of the sensor while applying, say ISO 400 to the other half?

It should be possible but may require a specific hardware design to do so. Magic Lantern does something similar (but not the same) on standard Canon sensor with dual ISO, which means every other line has a different ISO, reducing vertical resolution and increasing aliasing. Having different ISO for both halves of the sensor would not negatively affect resolution but might cause problems at the border between both when you want to create a smooth transition. You would just need to be able to process each line or half of the sensor differently (the latter making it probably easier to produce but harder to handle, as the horizon is fixed).

An ND grad is cheaper and bracketing is cheaper still, almost the first limitation people would hit is they'd want to change the graduations (angle, depth etc); ultimately there's no incentive for a manufacturer to develop such a technology.

That said, there is a kind of prior art in mixing sensitivity in-camera. If you look at some of the early Fuji DSLRs you'll find the SuperCCD SR sensor which used adjacent photosites with differing sensitivity to extend the dynamic range of the sensor (at the expense of resolution.)

The colour reproduction was very good and it handled extreme lighting situations well - but ultimately in the DSLR game if you're not Canon or Nikon you often don't get a look-in and (arguably) they are one of the most underrated of the early DSLR's (and they used a Nikon mount, so there was plenty of excellent glass available).

Technically each pixel on CMOS can be controlled independently, so AFAIK it's easier to do it on CMOS. Fujifilm did that on CCD but I'm not sure how the data readout is performed 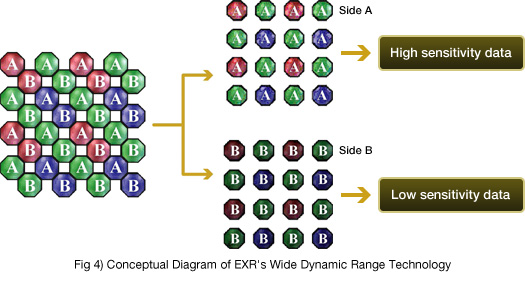 Such HDR imaging is used in extreme dynamic range applications like welding or automotive work. Some other cameras designed for use in security applications can automatically provide two or more images for each frame, with changing exposure[citation needed]. For example, a sensor for 30fps video will give out 60fps with the odd frames at a short exposure time and the even frames at a longer exposure time. Some of the sensor may even combine the two images on-chip so that a wider dynamic range without in-pixel compression is directly available to the user for display or processing[citation needed].

Of course using single-exposure HDR will decrease effective resolution, but it'll be fine for videos because there are already a lot more pixels in the sensor than in a single video frame. Magic Lantern can use alternating line-by-line exposure values to create an HDR video. In case a full-resolution is needed, Magic Lantern can also alternate the exposure value frame-by-frame, effectively halves the frame rate and creates a 30fps HDR video from a 60fps capture.

Sony on the other hand have a lot of HDR techniques: DOL-HDR, SME-HDR and BME-HDR, many are essentially just variations of the above, with SME-HDR being a new variant of Spatially Varying Exposure to shoot HDR at full resolution and full frame rate Not the answer you're looking for? Browse other questions tagged iso camera-design or ask your own question.

46
Should higher ISOs really be preferred (all other things being equal)?
14
Could a "universal exposure" setting be practically possible?
4
Why don't digital cameras have better dynamic ranges?
6
Can exposure be bracketed by many sensor readouts during single exposure?
5
Is it possible for a camera to take different exposures at the same time with different ISO's?
1
Digital photography ISO measurement, why uniform across whole image?

9
Variable ISO Sensor: Possible and/or Useful?
21
What is so special about ISO 1600?
5
Why do cameras use a slit between two curtains rather than exposing the entire sensor instantly?
1
Is it possible to use a single image sensor to capture a stereoscopic image?
5
Is it possible for a camera to take different exposures at the same time with different ISO's?
3
What is the possible optimal range for shutter speed, aperture, and ISO settings in product photography setting on white background?