Is the Preview file always the photo taken by the camera?

When I take a photo with a digital camera (I own many*), I can preview it with the ▶︎ button.

However, sometimes, cameras will displays a Preview photo that seems of a different quality than the final file (color, resolution, etc).

Sometimes, the camera can be set to shoot in both JPEG and RAW formats - which one would the Preview read then? Sometimes it's set to shoot only RAW - how would the RAW file be interpreted by the Preview viewer (in terms of light, color, etc)? Could some cameras save an invisible file on the memory card of a lesser resolution that they use in Previews to save RAM/processing power?

Basically, is the preview image the always same as the photo file that the camera took? Or do different cameras behave differently? How do I know what the behavior of the Preview is when I am shooting in two formats or in RAW? (I can't remember ever reading about this important "detail" in any manual).

*I have many digital cameras (Pentax Q, Canon EOS Rebel T1i, Sony NEX 5n...). I am writing the question to enable users with the same question to find answers effortlessly. However, if the answer is "depends on the camera", I'd love to know what keywords to look for in manuals or online, for each camera, and if there are industry standards.

When you take a photo with a digital camera, The camera collects the raw data from the image sensor, processes it, and creates a JPEG preview image. This preview image is attached to the main image file, whether the main file is in a raw image file format or is a JPEG file converted from the raw data according to the camera settings current when the image was taken. If you're looking at the image on the back of the camera, it is almost certainly the jpeg preview you are seeing.

Although the specifics can vary by manufacturer and camera model, the basic concept is followed by pretty much all of them. Canon cameras create a preview jpeg that is about one-quarter size of the camera's native resolution. They also create a very small thumbnail preview that may be displayed by your computer when you are looking at the contents of a folder containing images. 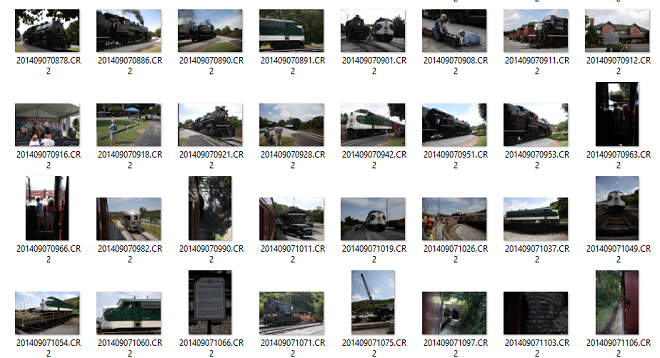 These preview images are not "the" raw image. They are miniature jpegs that are one among many possible interpretations of the raw image data, based on the current in-camera settings at the time the picture was taken.

Most cameras have a rear LCD that is about 1 MP or so. There is some contention that many "1,000,000 dot" back-of-camera LCDs are really only about 333,333 pixels because the manufacturers count each R, G, and B subpixel as a "dot." Either way, the preview image you see on your camera's screen (whether 1 MP or 0.33 MP) is a lot smaller than the full size image your camera took. Most current digital cameras run from about 12 MP on the low side, to somewhere between 20-30 MP on average, to about 50 MP on the high side.

When you look at an image preview on the back of your camera, you can't tell the difference between a 5-10 MP preview image and a 20-30 MP full size image because the screen is downsizing either one to show it to you.

Related:
How to make camera LCD show true RAW data in JPG preview and histogram?
Why do my RAW pictures look fine in Lightroom preview but become faded when exported?
Why are my RAW images already in colour if debayering is not done yet?

When viewing images on the LCD screen on the back of your camera, what you're seeing is a converted JPEG of the RAW image. Shooting in RAW will still show a JPEG as the preview.

Not the answer you're looking for? Browse other questions tagged digital file-format firmware preview or ask your own question.

12
Can I save the JPEG preview image that's generated in-camera when I shoot in RAW-only mode?
4
How to make camera LCD show true RAW data in JPG preview and histogram?
4
If I save as RAW+JPG, which of the two is shown on the screen of a Canon 600D?
3
Why are my RAW images already in colour if debayering is not done yet?
4
Why do my RAW pictures look fine in Lightroom preview but become faded when exported?
3
Is tone mapping automatically applied to RAW images?
2
adobe lightroom import photo more red than original
3
How to copy Images Back To DSLR from computer?
2
Does anyone know what this diffuse pattern that appears to be in all my photos is and if it can be fixed?
0
color to black & white photo...back to color mishap
See more linked questions

12
Can I save the JPEG preview image that's generated in-camera when I shoot in RAW-only mode?
1
RAW photo preview
13
How do I ensure good color reproduction when photographing paintings with a mid-level DSLR?
1
Can firmware upgrades significantly increase JPEG quality?
0
Photo in windows preview show as portrait but in photoshop or msword show as landscape
2
Lossy but essential: is there a modern file format useful for modern camera files?
0
How can I preview photos from camera on laptop?
9
Why don't cameras show an "accurate" histogram?
2
Change photo aspect ratio with mac "preview"