Why are there multiple white spots on photos taken with a Praktica IV camera?

I usually shoot 120 film, but wanted to try out 35mm. So I found a Praktica IV camera in my house and shot a roll of Ilford HP5. Almost all images from the roll have multiple white spots. Some even have white scratches.

Update: I checked the shutter, and it is indeed full of small holes. 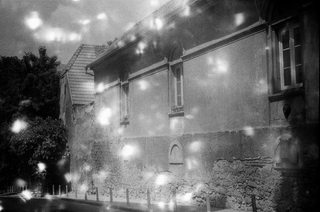 The white spots look as if you have an old and leaky cloth shutter. The L- and BC-series Praktica cameras East European shutterbugs grew up with have very reliable metal shutters. However, the Praktica IV did have a cloth shutter that was notoriously unrealiable.

The variability of the spots from frame to frame may be explained by movement of the shutter, as well shielding by the mirror and a lens cap. The defect may also not have had time to form if the unaffected photos were taken in rapid succession or in subdued light.

You will be better off replacing the camera, as it would be uneconomical to repair.

Your apparent intended picture is the one of the house. The other looks like it was dark except for patches of dappled sunlight hitting objects, or maybe bright sky viewed thru trees. As @MichaelClark notes, there are a few late film era cameras that wound the film electronically that could be set to double expose each frame. If the user forgot to turn that option back off, it would double expose an entire roll.

If this was a double exposure, the solution is to be more careful next time.

For better diagnosis, it would be helpful to show multiple frames, including the sprocket areas, areas between frames, as well as the leader and trailer.

Not the answer you're looking for? Browse other questions tagged film 35mm ilford praktica or ask your own question.

11
Where can I get 4x5″, 5x7″, or 8x10″ color sheet film (or other hard-to-find exotic film) processed?
3
How to use correctly a Lomo Diana F+ and 35mm films?
4
Where can I find B&W film for an Imperial Satellite 127 camera?
3
How far can you push process an accidentally under-exposed film?
3
Hold baggage xray scanners - how likely is it my film might have survived?
2
Big white circle on scanned negative
7
How do different developing fluids affect black and white film?
12
Two films in a tank, only one comes out with a development error – why?
3
Poorly scanned or poorly shot film roll?
2
Pinholes in 35 mm slides